I try my hand at aspirational travel blogging, with mediocre results

Here I am, blogging, even though I am semi-migrainous, two glasses of wine down and have been up and 'travelling' - missing trains, crying at self-check in, standing in wrong queues, headbanging strange men - since 6am. That's devotion for you (I put it down to my craven desire to win a Weekend Blog Award*, which has me dancing round in circles like an inept performing seal). The worst bit of the trip was when I caught sight of my accidentally fake tanned wrist in the cold light of day (I only tried to do my legs, but obviously forgot to wash afterwards) and gasped out loud at the horror of it. I have been hiding my extremities behind conveniently placed pieces of furniture ever since.

Hello! I am in Abroad with two very nice people I have never met before. I did not die in the metal tube of death. I nearly did not even catch the metal tube of death due to some Belgian rail mind games, ticket machine slapstick and then standing in the wrong passport queue for 20 minutes either. Double triumph! Now, am in .. I dunno. Halfway between Cannes and .. Antibes? Maybe? It was a long, twisty way and I had to stare at the horizon like a dog with my forehead pressed against the window to stop myself being sick.

But it's ok, because outside it looks like this: 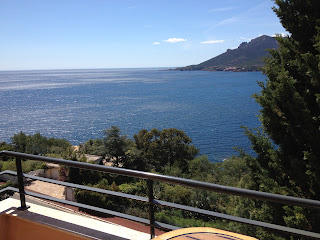 Isn't that gorgeous? We're not in Uccle now, Toto. Well, it looked like that before it got dark and ominous. Now it is blowing a gale outside and there are big, angry waves bashing against, well, whatever there is down there. Some species of rock, I suppose. Ah, springtime. I am in the dark, lying on my elaborate moorish bed, surrounded by elaborate moorish decorative elements, still wearing my coat, because I cannot work out how to turn the air con off. At least there will be no call to wear a swimming costume, which is almost certainly for the best. I haven't looked closely at the results of my shitty midnight fake tan and I think if I, and everyone else, can keep it that way, we can count this trip as a success.


This afternoon, we went on a slightly eccentric roadtrip in a shiny black convertible Mini none of us know how to drive to Nice. We wandered round the tiny, windy streets of Vieux Nice, and I got to buy some of these from two women with really luxuriant moustaches: 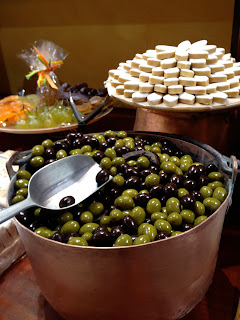 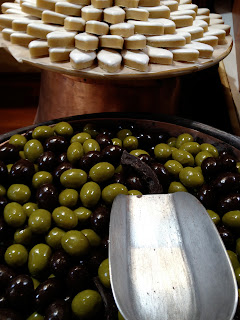 I used to be obsessed with these pretend olives when I was little. It was around the same time that I spent a whole 6 week summer holiday claiming to be a horse and only answering to the name 'Lightning', and that other holiday I spent hanging from the top of a door frame like an over-sized bat. This doesn't really bode well for the faux-olives, does it?

Whereas nothing at all bodes well for these siamese marzipan dogs. 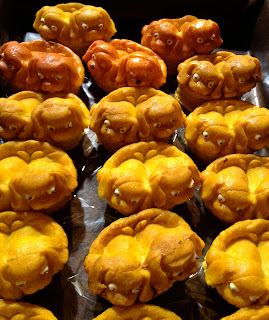 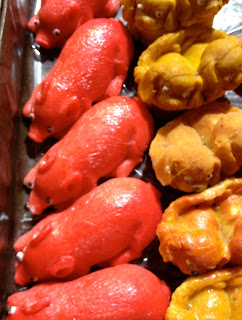 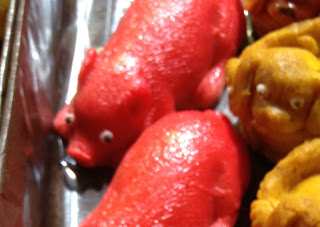 These too, were interesting. 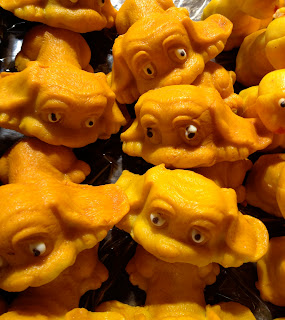 (Stick with me, things will get - marginally - better in a moment. Not much nightmarish marzipan still to go. Ok, just one). 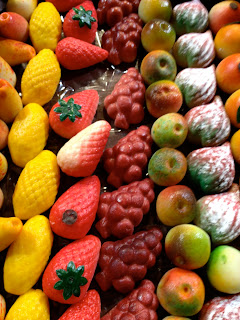 Apart from the Nice Home for Deformed Marzipan, we went to the most amazing glove shop.

This was genuinely brilliant rather than nightmarish. Gird your loins for a lot of terrible pictures of gloves. 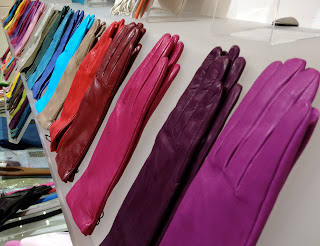 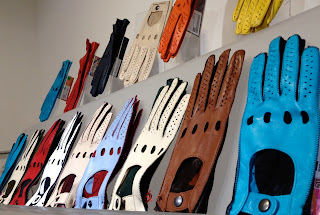 I wanted about 80 pairs, especially those amazing two-tone seamed ones, even though they made my fingers look like colourful sausages. 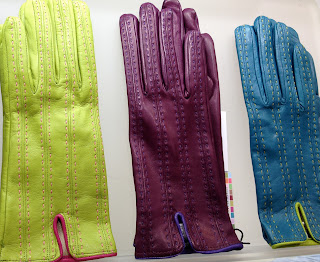 Which would you have chosen? It was IMPOSSIBLE. I have a lot of regrets. I would happily have taken 8 pairs home with me, even though it is nearly summer, though the howling gale outside might beg to differ.

The gloves were actually impressively cheap (from €35). Glove Me, it's called (5 Rue du Marché, 06300 Nice < LOOK, that is actual information, right there). Highly recommended.

All in all it has been a very successful day. I did not have to pretend to be studying a wall, or to hide, once. I got over-excited at dinnertime and did some over-sharing, but I do not think I mentioned capybaras. Tomorrow we are going to visit Pierre Cardin's bubble house. You can look forward to me taking some terrible fuzzy pictures and possibly falling over a couple of times. Tune in tomorrow! Exciting times!

*(I have decided that contrary to my natural inclination I am going to cravenly continue asking you to vote for me for a few days. I hear great things of this 'asking for stuff' business and have never really tried it, so why not now? I apologise for the assault. I am following Peter's lead, because he won a competition and got to go and stuff sausages in Larzac for a week or something and he hustled loads. Ok, he also did brilliant, amazing stuff with meat, but passons).
Posted by Waffle at 00:28

Were they playing this in the glove shop? http://www.youtube.com/watch?v=GU6i_JhbVsc&feature=fvst

How long are you there? I have a dear friend in Marseilles whom you would love, in the event you need someone to catch you when you pitch forward violently into shelves loaded with sweaty marzipan experiments gone horribly wrong, mingling your fake tan with their sweet, sebaceous benzaldehyde sheen.

Those sweaty animals look hilarious. Looks wonderful out there though.

The marzipan dogs are slightly... disturbing. But only slightly.

oooh the gloves are divine, if you have glove fetish, like bright colours and quality leather - for the rest of us 1 pair please, in the slightly muted raspberry!

Love the sweaty deformed marzipan, adore the faux olives (are they chocolate?) and I'm drooling over fabulous glove shop. Hope you managed to have a reasonably relaxing time at some point, my dear. xx

p.s. I took my first solo trip in over five years to Melbourne recently, and was similarly dumb-founded and challenged by not only auto-check-in but auto-BAGGAGE-DROP. I had to weigh and tag my own suitcase. Came to startling and rather disappointing conclusion that I am a mere husk of my former independent, adventure-seeking self.

And I voted for you and a whole bunch of other blogs, too. (For the other blogs, I voted on title alone. I think I spotted an oiseaux so that got the tick.) I hope you win some great shit, dude! xx

I don't see your blog on the list, but my French is limited to 2 years in High School a long long time ago. Is it there under another name or on another page?