This probably makes no sense. I am writing it against the background of 'Real Steel', that film you probably haven't seen if you have a shred of sense, where Hugh Jackman and his estranged son bond over robot boxing. It is LOUD. Loud and deeply, deeply idiotic. The boys are enthralled.

'Chop the head' advises Fingers, pointing a long, popcorn-sticky digit at the left of the screen.

'Danse!' shouts Lashes, who does kickboxing on Wednesdays and should probably know more about this kind of thing. Though every time I go to collect him, he seems to be making sweeping, overblown ninja poses at himself in the mirror rather than actually fighting. I'm fine with that, obviously.

The dog has fallen asleep with his head on a Nintendo DS, because my sister is staying and is much more conscientious about long walks than I am.

So. The Fancy Fair was surprisingly low key. No mechanical rodeo, no headmaster fancy dress, no infant bikinis made from CDs and I only witnessed one minor punch up. The rain held off, most of the time. I spent €35, mainly on sweets on sticks, plastic crap that has already broken and throwing balls at photos of the headmaster. 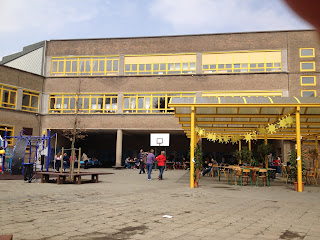 The scenes of disco dancing farce were indescribable, as ever. I thought this lot were particularly unlucky in their outfits, petals drooping, leggings at half mast. 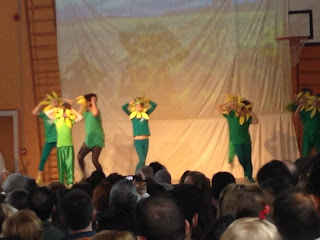 There were three Claude François numbers, including Alexandra, Alexandrie and nothing that was released after circa 1989.

Every time, I go into the sweaty, dusty, school hall dragging my heels, crabby and faintly resentful. And every time I roll my eyes at the CFO and bitch about the heavy-handed organisation (three enormous men in shades and silky black bomber jackets with lapel walkie-talkies letting people into the gym ten at a time? THIS IS A PRIMARY SCHOOL, PEOPLE, not the sodding Ministry of Sound). Then it starts and for a few minutes I giggle at the choice of music and the halting, shuffling cheesy dance steps and the incredible height disparity between the tallest and smallest in each class, and how there are always one or two who just stand at the back and sway slightly. But every time within about five minutes, (not even necessarily even when it's my children on stage, shuffle-step-clapping in deep, unsmiling concentration), I'm taken by surprise when my throat suddenly closes up and tears start pricking my eyes. And a couple of minutes later I am crying unrestrainedly and I have to pretend to be looking for something in my handbag while I wipe my eyes on an old scrap of tissue.

Why? I'm not really sure. Because the children are lovely, I suppose. They're lovely when they're serious and apprehensive and concentrating, when they're mouthing the words to songs that are thirty years older than they are, dressed up as sunflowers or mermaids or cowboys. When they have one wide, anxious eye on the teacher down the front, doggedly doing the actions along with them and the other scanning the rows for their parents, glued to their camcorders, mouthing the words too, nodding in encouragement. Then at the end, when they swell visibly with pride at getting through to the end without major mishap. This year I cried a little bit more at how big they all our now, these kids I've known since they were tiny, watching them every year sitting on these ridiculously small, uncomfortable chairs, how they've got all long-limbed and beautiful with their big, teased, gelled hair. Pah.

It gets me every time, dammit. Then I blow my nose a final time on my disintegrating tissue scrap, feel a bit sheepish at my own mawkishness and go and buy a warm beaker of exorbitantly priced wine out of a box.

(and here, for Curlywurlyfi, a tiny clip to prove that they really, really did do Cloclo)

So glad the voting is coming to an end, when do the results come in??? Can't wait to see if you win the prizes! You totally deserve to win (although I know nothing about the other candidates other than I clicked several boxes en route to yours)! GOOD LUCK xx

Voted sucessfully for you, and for many sites I did not know. Hope you win.

I too cry copiously at the mere sight of children singing or more surprisingly maybe playing musical instruments badly! As for Christmas carols my mouth aches with pain I have to chew so hard. Yet I always seem to be the only one. So now I know I am not alone!

Nope, you're not alone. Doesn't take much these days for the eyes to prickle. Curiously when my own lads were small it was less of an issue and more something to endure. I will be a soggy weeping mess though if any of said boys ever presents me with a grandchild on a school stage.

Best of luck with the comp.

I can only imagine. We have preschool concerts but at this age it's mostly shepherding of small confused children around while the teachers valiantly sing the songs for them. But my son is just going into kindergarten this fall so soon enough I think I will be sniffling right along with you.

OK, this is the kind of comment that probably starts you shuffling through your web analytics on Stalker Alert, but I was cooking the other night and my son began talking about Pokemon and so naturally I thought of you, and I had a revelation. Which is, and I expect given prior posts that you would argue, that I honestly think of you as a sort of parenting role model--your children seem so happy and normal. I know you mention shouting and irritation but that also seems totally normal, and I also admire how you do craft projects and take them to strange museums and other such things. And from what you write it seems like you have an excellent sense of humor about parenting and to me that seems very important. SO, anyway, I think you should write a nonfiction book about parenting. Like your posts, with some humor and some reality and without giving up too much really about the actual children, and not really a how-to, but a sort of meditation on it all from your perspective. A better, more happy, laissez-faire, humorous version of, or rejoinder to, all those stupid Dragon Mother, I Put My Seven-Year-Old on a Diet, didactic crap the New York Times keeps trying to push down my throat ... I remember your posting about some British or European equivalent, a guy with horrible lips and even more horrid opinions. I would completely buy it and I think it would be fantastic. OK, I know you can't really tell a writer what to write, but consider it, please. That is all!

And I totally agree with L, above. You should write a non-fiction parenting book. It would be ACE.

after reading this article inspired many of my