Water consumed: none in its raw, evil form. Two grudging rooibos teas. Two normal teas. One coffee (what? No one said this was some kind of Gwyneth detox lunacy). By mid-afternoon a headache of intense evil had settled around my temples, but I do not think we can attribute that to dehydration, since my normal fluid intake non-attributable to tea or alcohol is approximately 0,0001 millilitres per week.
Green things: I made the amazing green soup, which was a revelation because (i) it took approximately ten minutes to make from start to finish (ii) it did not require stock, because really, WHO has stock sitting around (Peter, do not answer that)? (iii) I did not even have to chop an onion or peel anything; and (iv) I did not manage to make it taste like silt. The green soup is a win. There will be green soup for lunch today. Green soup for the people! ('The people' generally, not the people I live with, who, to a man, refused to touch my lovely green soup) 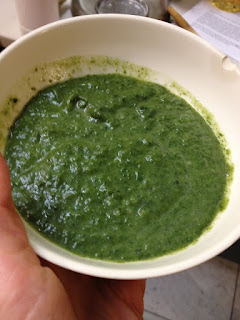 Green soup
The Fruit Challenge: I bought some strawberries, which were largely tasteless, what with it only being March. I also had frozen berries for breakfast (which I used to do every day back when I still had standards). They were .. fine. Not as good as Charli pumpkin seed bread toasted with salted butter and Christine Ferber rhubarb and mint jam, which I also had, because this is not a diet, just an attempt to look more like a human being, and also, rhubarb is a fruit. Well, I think it is. Now I have doubts. Anyway, if it's not a fruit it's a vegetable which is EVEN BETTER.
Cosmetics brush cleaning: fail. Absence of hot water put me off. I'll just not wear any make up, shall I, and put this convenient paper bag over my head instead.
Other fail: leftover birthday cake. Happily this is now finished and there will be no more buttercream sabotage.
And how do I look? Still hideous, atrocious. I might look better if I could stop picking at my cheek and making it bleed, but apparently that isn't going to happen anytime soon. Still headachy, but the orthodonist can sort that out* with a mere 18 months of fixed braces top and bottom at a cost of .. actually he wouldn't say. I think he was embarrassed and I had already got emotional when he started casting aspersions on the state of one of my roots when THE NORMAL DENTIST SAID IT WAS FINE, DON'T SAY ROOT, WAAAAH. Sob.
(*Possibly. He is not even sure. It might be nothing to do with the tooth grinding)
Today I will test out some of the comment suggestions, possibly including eating salmon/putting oats or perhaps aspirin on my face/scrubbing with salt and olive oil in the shower, since FINALLY the hot water is back and I can actually have one. I had some of the Clinique Daily Scrub someone recommended, but I had to bribe the babysitter with it last week when I was an hour late due to getting on the wrong bus, so that's out, but there's still the option of a trip to Lidl to see if they have mangoes. It's a whole world of possibility out there! I'll just curl up on this pile of coats like a dormouse for five minutes and then I'm sure I'll be fine.
Posted by Waffle at 13:24

Try eating rhubarb without sugar, proof positive it is a vegetable! Good for you to get rid of that birthday cake! ;-)

OMG poor you, you had to get rid of the birhtday cake yourself. The suffering, the suffering

It was a LIVING HELL, but I forced down the last 500g of buttercream Tinne. Thank you for your support at this difficult time.

Rhubarb. It's a stalk, basically, innit?

Hmmm. I thought rhubarb was a pie filling--strawberry-rhubarb pie with whipped cream. So I'm no help there. Do you drink your water straight out of the faucet or do you filter and chill it? You could try making yourself a giant pitcher of iced tea (I like mint or lemon-ginger) and keep it in the fridge. I've also started using a swipe of glycolic acid twice a day (alcohol free). It seems to keep my skin from being quite so Burgess Meredith-y.

Without seeing the photo that M saw, it's hard to comment *smirk* but I suggest you just take another pic by candlelight. From above (no chins). You're very welcome.

Rhubarb is a herb i think... have not checked and this might be QI/grandmother 'knowledge'. Well done!

I for one applaud your use of vegetables. It can only do you good. And after salty tears of mortified shame, haughtily superior righteous indignation is the second best condiment. So it's win/win.

Ummm ... could you maybe, just possibly, use some of the water that you boil for your tea to clean your cosmetic brushes? I don't think it's mandatory that the hot water has to come out of the tap ...

Hehehe Karen, I honestly did not even think of that. My brain is enfeebled. Anyway, I have hot water now.

I'm still back at the green soup struggle. Pardon my francais, but what the hell is *roquette*?
- Brenda