The face just gets worse and worse. I fear that finally my inner corruption is showing on the outside.
(I've told you before, I'm sure, but this blog is old and getting quite forgetful, that when my sister was about four and poorly she said forlornly to my mother "I'm a mass of corruption", which gives a sense of the kind of household we lived in. Talking of which, Prog Rock rang tonight to talk about Anne Enright, without any kind of introductory preamble. I took advantage of his call to ask him why he had sent me some kind of complex cartoon book about neuroscience for hippies. That may be a misdescription, but it is terribly odd, look: 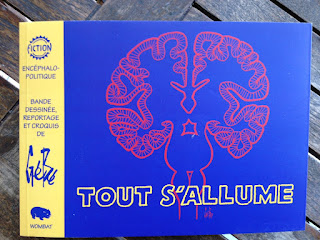 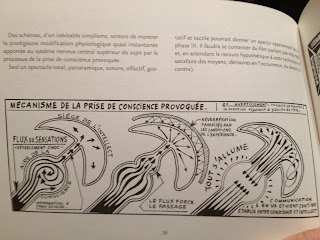 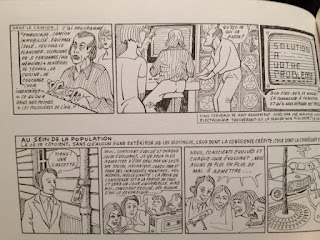 There are pages of this kind of stuff.
He told me, with pleasing inevitability, that he had read about it in Le Monde Diplomatique and muttered something about soixante-huitards. When I said I had flicked through and didn't understand a shred of it, he said that was probably because "You're all reified, man", then he laughed uproariously. This is entirely typical of our exchanges. )
So: corruption. Masses of it. I'll need unicorn serum and holy water soon. Where do you get unicorn serum in this town, eh? I should stick that on an expat discussion board right now.
The tally of shame:
Fruit: a bad supermarket mango
Vegetables: lots of salad. An avocado. Some red pepper even. JESUS, why don't I look dewy yet?
Adventures in beauty: none, except the ongoing attempts to cure my fingerclaw grossness.
Fluids: Weak grenadine, small beaker of terrible wine, tea. Located Rooibos tea in supermarket, so hydration may recommence.
Small compensations for working this Saturday: a scoop of Capoue salted caramel ice cream. The arrival of this book. Several episodes of 30 Rock. Oh! And overhearing the man in the hippy shop - I bought omega oils, god help me, and a tiramisu, but it's probably made with oat cream and carob - say that today someone asked him if he stocked 'oeufs de chèvre'. That's goat's eggs.
Maybe that's what's missing from my regime?
Posted by Waffle at 23:20

2 things (apart from the hippy dippy crushed asprin, and occasional week-long no-wheat-no-dairy-no-sugar-no-alcohol-no-meat-or-fish-no-life detoxes) have made a huge difference to my skin since it started getting arsey a few years ago: Mario Badescu products - if you can get your hands on them (www.mariobadescu.com), esp the glycolic foaming cleanser). Not too expensive, and are quite fab. And Jojoba oil. I use Neal's Yard (Let me know if you can't get it in Belgium and I'll wrap some in owl feathers and whizz over to you). My skin is far from dewy and plump, but is no longer ravaged by ridiculous spots as it once was.

Of the beautifying front, i realised today that the slightly terrifying paleness of my legs was due to my new jeans staining them slightly blue. Disturbing and re-assuring. My skin tone has returned to a more natural, less blue, pale greeny/brown. Yes thats my natural skin colour...what some people call olive. Really not great by the end of a yorkshire winter. Thank your genetic code for at least making you a lovely shiny pale...not wierd mottled sort of brown but not nice pale.

Two bits of advice:
Now that the sun is here (well in Brighton anyway), just sit for half an hour facing it with eyes closed (of course).
Secondly, just cut your nails really short and rub vaseline around them each day.
We are sunshine starved, that is all it is, my skin repulses me and nails too. I seem to have aged ten years since last summer and am depressed everytime look in mirror. I swear it is a decade trying to avoid sunbathing, my skin is crying out for sunkissed health!

I'll second that (the reluctant launderer)! Have been using Neal's yard for years and somehow you feel you are doing your skin good when the cream you are using is rich in essential oils and smells of plants and natural stuff.
I have tried Clarins/Clinique etcetc and it all smells so chemically and the texture is thin and non-moisturising or totally greasy.
Neal's Yard whacked their prices up a couple of years ago, used to get a pot of moisturiser for £12, now £22ish but my skin looks crap on anything and I mean anything else. NEAL'S YARD!!!!!

I hear you, about Neal's Yard but I find it so hard to believe. I mean, who is Neal and why should I go to his yard? Doesn't it all smell of hippies? I will bravely put my deep rooted prejudice aside and do as you say, but it is against everything I hold dear.

Anon - I did sit in the sun today! It was lovely, but tomorrow I will have freckles to go with my facial leprosy. Let us see whether this is a good look, hmmm.

Well Neal's Yard is in Neal's yard in London, Covent G'dn I think, but they have one in Brighton and also sell it in Boots.
No, not too hippy smelling at all actually, unlike some creams I have tried. The 'frankinsence nourishing cream' and the 'rose & mallow moisturiser' are the ones I use. Thats all, I don't buy ALL my stuff in Neal's Yard, just face cream, anyway, Try it, please.

The return of a 32GB storage option for the iPhone 6S mqay also be in the works, according to market research firm TrendForce. This would kill off the 16GB base option leaving customers with 32GB, 64GB or 128GB to choose from.

Thanks For Your valuable posting, it was very informative
microsoft office 2010 professional download