This is a poor excuse for a post, apologies, and I will go through the Religieuse Challenge in more detail when I have located my will to live, but just as an initial comment: choux pastry? Ridiculously, gratifyingly easy. The rest? Not so much. 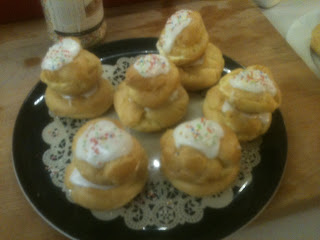 Fuckyeahreligieuses
(Sort of)
(Depends who's asking)
(No one tell Pierre, right?)
(The children liked them anyway)
I think the global sum of mental health in the world has been depleted by this exercise and would have been better served by me deciding to spend Sunday under a blanket with a nice book, but there we have it. Also, when I came into the kitchen on Monday morning, I realised two cupboards had somehow been broken during the religieuse-arama. I think I was in some kind of higher, shamanic pastry-based state because I have no idea how it happened. Maybe the children did it when I was begging specialist advice on the terse Marcolini instructions? Or possibly I just leant especially heavily on the hob in my custard thickening despair. That could definitely have happened, there were several periods of custard related despair. Doesn't explain what happened simultaneously to the shelf in the shower though. Maybe my heavy, heavy head came to rest there for a moment.
In other household disintegration news, I have spent the last three days in pitched battle with the fire, like a particularly ill-trained and feckless parlourmaid. The fire has decided it does not "do" flames anymore. No, the fire - which is one of those ones with a glass door, I do not know what they are called in English, a poêle, here - is quite content to swallow any quantity of kindling, firelighters, wood, coal or strange briquette things, and transform them all into an Anthony Gormley style box of dense smoke. When I open the door, there is definite evidence of smouldering, and eventually whatever fuel or live sacrifice I have despairingly thrown into its depths gets transformed into a pointless mound of pale ash, but there is no discernible heat, and no flames. The only time in the last ten days when I have raised a hint of flame from its inky depths was when I entirely forgot about it for a few hours on Sunday due to excess shouting and pâtisserie. This feat has not been repeated. I find the whole thing particularly galling, because I was raised setting fires in icy, damp Yorkshire grates with little more than some Seabrook crisps, one hopeful shard of kindling and a sodden Yorkshire Post to aid me. This thing is supposed to be modern and labour saving, but in fact it is just mocking me.
In fairness to the religieuses, the empty choux that I couldn't be bothered to fill came in handy for nibbling when I realised this afternoon I hadn't eaten for 24 hours. I have been worrying disproportionately and appetite-destroyingly about a relatively minor work crisis. The crisis has resolved itself without death or litigation, but I feel a bit bruised. I can't remember if I was always this bad at dealing with mild disagreement, or if I've got even softer and more pathetic with all the time I spend in the attic by myself watching Youtube videos of small primates. Either way, my friends were lovely and supportive and generally amazing with my pathetic whinging, so thank you my friends.
In particular Madevi and I calmed our various neuroses by listing foods we would eat on our planned Facegoop trip to Paris at Easter. I say 'Facegoop', though in fact there is no beauty planned, just eating and possibly chasing a fat pony round the Tuileries to rub our faces on it. I realised this week that most of our conversations revolve around food (after some discussion, we concluded that if we subscribed to Klout, which neither of us understand, we would be authorities in the following categories: "food, giant insects and despair"). The food listing was a very calming exercise, I recommend it, if you are greedy and Tuesday is kicking you in the face.
Our combined Paris eating list:
Du Pain et des Idées croissants with beurre aux cristaux de sel
Lebanese galette "oozing with cheese and fresh mint"
"A really good saucisson with some very good cheap red wine"
The famous cappucino eclair from Cacao et Chocolat - except OH GOD IT HAS GONE BROKE WHAT NOW? I will substitute with the Ladurée St Honoré aux framboises, but M will disagree.
"A good roast chicken, with potatoes roasted in the chicken fat".
Sadaharu Aoki .. anything, really. Petits fours. A Bamboo. Whatever. Three of everything will do nicely.
Tomato salad with a chèvre frais and a baguette.
Frisée and lardons
Everything from Pierre Hermé's Infiniment Vanille range.
Panini from a place M knows near St Eustache, dusted with parmesan and drizzled with good oil.
A really caramelised, chewy palmier biscuit
The mythical Délice Café that I ate nearly every day when I lived in Paris, even though I tried it when I last went back and it is Not All That.
What would you eat today and where, if you could?
Posted by Waffle at 20:39

Oh, to be eating waatlemoenkonfyt* and camembert with green peppercorns on the sunny slopes of Table Mountain with my best friends, all of whom live painfully far away... Washed down with chenin blanc, and followed of course by a trip to Marcel's for kahlua flavoured frozen yoghurt. Mmmmm.

_____
* A Cape specialty: watermelon rind preserved with ginger. Sticky and delicious, with a unique texture. It really can't be found outside of Cape Town. Theoretically I could make my own, but recipes involve slaked lime, and I'm simply not bold enough to cook anything with ingredients sourced from a hardware store.

About the wood stove, you need to check that it's getting enough air. Sounds like the vents might be clogged up.

Have you ever seen the effect a blast of bellows has on a smouldering heap? That's what you want. It's magical!

Carne asada tacos or machaca and eggs with rice and beans from a place called Los Tres Toritos on the bad side of town in Reno, Nevada, USA. Mmmmmmm

Good to see you blogging again.

Seafood chowder at O'Connor's pub in Doolin, Co. Clare, Ireland after a long walk along the Cliffs of Moher on a cold day.

So glad you're back!

Pita falafel from L'Express just off the Grand' Place; Scampis a l'ail and then pizza from Aux Bons Enfants; the breakfast bread thing from Pain Quotidien; a yummy pasta dish I can't recall the name from Skievelat near the Sablon; poulet frites from the place near the Ixelles lakes; boulets frites in Liege; steak au poivre with frites from anyplace in Belgium (decidely a frites theme....)

Lobster roll (the hot, buttered style, not cold mayo) with a side of coleslaw accompanied by salted red potatoes, a paper ramekin of drawn butter and an iced tea (no lemon or sugar) followed by a soft-serve vanilla cone with rainbow jimmies. If it's warm, on a picnic bench near the carousel, but inside with the cranky old folk seeing my future is good too--at Lenny & Joe's Fish Tale on the Connecticut shore.

I would eat those small tacos from Juanita's, down by the ancient Mr. Milkbottle sign. Seeing as how I'm not there (and they're closed right now), the only alternative seems to be turning into an insatiable Hindu god and eating the heads of klussers. If electricity had to be harnessed, and applied to power tools, and their use inexplicably infinite and unending, then screw you reality, I'm going home. Don't know where that might be, but I heard the most wonderful phrase early this morning, "in YOUR universe." What came before or after is a mystery, just latched onto that one snippet like a dog that can only make out its name. I have a universe?

Florida lobster (way better than anything Maine could ever hope to produce!) tails washed down with iced tea (OK, OK, truth be told, margaritas...) in Miami (Florida, NOT Ohio or Manitoba!) with sister and brother-in-law (the lobster catcher)...which we will be doing at Easter.

A box of my very own chocolate chip cookies on my couch. God I want a cookie...

Many many years ago there was an easily-overlooked little burger take-away on Woodbridge Road in Guildford called Bretts. Inevitably there is a tandoori takeaway there now, but Bretts made the best burgers, without exception, I have ever tasted. I would be eating my burger and chips while sitting in a knackered old Simca, looking out over the view from Newland's Corner.

Lentil soup in the Merure Etap behind Luxor temple, or chicken livers at El Tahrier in Cairo, frites and mayo anywhere in Belgium or oliebol, coffee from Pain Quotidien, afternoon tea at Liberty's or Fortnum's. Snacking around the Borough market. Scrambled eggs on toast in Chris's kitchen.

When you've stepped blinking into the Dordogne sunlight after visiting the prehistoric men and improbably glabrous women in the grotte, the nearest restaurant, whose name I have forgotten, will serve you a thick chunk of foie gras( NOT paté, which is the abomination of desolation ) lightly seared, with caramelized apples and a glass of Montbazillac for about 20 euros . To be eaten to the sound of trumpets.

Errm, wine. I'm not that keen on food. Sorry, that wasn't really the point, was it?

A recreation of the Indian meal I had at Raj Mahal in the East Village in Manhattan.

you know, Waffle you and M should have a business of beauty and food. Sort of like a tour of off-beat places to eat in Paris and Belgium and then take your well sated tourists to a fancy department store make-up counter and direct them as to what to buy. I would sign up for that!

You may be impressed to find out that you have numerous on-line addition merchants that will cartier replica the most up-to-date along with classy assortment of Clutches, Instructor Luggage along with Bags. Nevertheless always remember that this tremendous stages involving classy along with fashionable luggage as well as bags are generally assigned a terrific price tag brand. Effectively, if you are uneasy to pay out large volumes via cartier replica uk pouches pertaining to classy luggage, and then lower keep is definitely befitting anyone. Of course there are lots of legitimate lower merchants via which you could obtain Affordable Instructor Luggage, Clutches along with Bags that will go with your true self. As a result, you'll be able to decide on your selected handbag that you just often wished pertaining to in reasonable priced ratesThere are generally many rado replica sale involving affordable Instructor Luggage, Clutches along with Bags, so that you can purchase your nearly all favourite company. You'll be able to find the money for to acquire instructor luggage that will go with your elegant along with laid-back clothes when they feature small price ranges. Once we realize that will in rolex replica internet sites you can find good quality solutions for the charges anyone put money in, if you decide to include the fortuitous one particular, you'll be able to accomplish a new developer instructor handbag, handbags as well as price tag for your explained charges. Placed the two of your respective lower limbs sheer in the rolex replica sale, which means that your system appears to be it can be at the excellent eighty amount viewpoint.

A recreation of the Indian meal I had at Raj Mahal