It is the season of sackcloth, ashes and tax returns, I have sworn off booze, chocolate, Jaeger sale breton jumpers, St Aulaye lemon loaf cakes and anything that smacks of fun. All that remains is watching the endless hours of blanket coverage of the French presidential election campaign until François Hollande's neck wattle haunts my dreams, shifting and dancing like Salome's veils. For light relief, I sometimes look at the back of cupboards and try and locate bank statements from 2008.

I have, however, also watched a couple of episodes of the new series of British Masterchef (as well as a few of "The Professionals" in the autumn) and I am sorry, but it is a load of old rognons. Greg Wallace with his ventouse-baby head, demented enthusiasm and lubricious facial expressions, that man Torode with the made up accent who is composed from humanoid silicone and manufactured irritation = horrid. Michel Roux, cadaverously displeased, is the only one I have any respect for and he just looks resigned and intermittently embarrassed. There is no point in being needlessly emphatic, Michel, I can see defeat in your empty, empty eyes.

No: what you need is FRENCH Masterchef and I will tell you why.

1. They cook better. They just do, I am sorry. This has the potential to be boring, I grant you, what with no one going to pieces over a slimy, curdled puddle of espuma, but actually it just means you end up watching in forensic detail and getting shocked to the point of hyperventilating if someone presents the judges with a slightly undercooked quail, or an underseasoned jus. They are more attractive too, I think, but that is my fatal weakness for French men speaking.

2. It is more "rigoureux" (rigorous, thorough, exacting). Great attention is paid to things like: naming 400 varieties of cheese and locating the various cuts of hoof. Identifying four species of near-extinct root vegetable. Filleting sea creatures that look like they are laughing at you. Trussing things up in the right type of string with the right type of masonic knots. On one of my favourite episodes of the most recent season, live angry crayfishes pursued the candidates across their worktops, nipping them cruelly. The judges are obsessed with cleanliness of work stations and are constantly chastising candidates for failing to scrub them down properly. You are not here to emote about your "journey", is the subtext. You are here to use a fucking j-cloth, repeatedly, and with vigour. It looks NOTHING like anything that would ever happen in your own kitchen, and as such, it is far more fascinating.

3. The judges are filled with righteous anger that is wonderful to behold. The judges number two chefs and a critic. First, there is small, Southern fury, Yves Camdeborde: 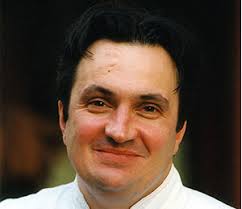 (he NEVER makes this kind of face during the programme, however fucking great your brandade de morue is). Yves Camdeborde refuses Michelin stars and spits in the face of a cluttered worktop. He looks like he is probably very handy with his fists. He could fillet Greg Wallis and his vegetable fondling fingers. With his TEETH. 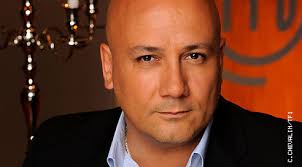 I love Frédéric Anton. His angry disappointment at a poorly executed sauce béarnaise is Shakespearean in its intensity. Very movingly, there are a couple of points each season where Frédéric Anton puts on his special "meilleur ouvrier de France" chef's whites and sash and medal and prepares something complex and classic for the candidates to copy, the tip of his toque trembling with pride as he spatchcocks a thrush with a gigantic sparkling knife.

The third judge, Sébastien Demorand, is a food critic. He is the kindest, but also very, very cutting. 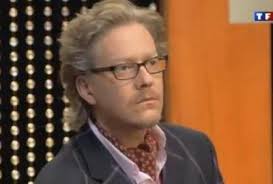 And sometimes he wears a cravat. Really, what more could you want?

Together, they are like three culinary furies, swirling in a black cloud of disapproval around the kitchen. How DARE you overcook this beef says Yves Camdeborde, puffing himself up like a courting pigeon. You are disrespecting the cow, mother France, and me. Frédéric Anton stares bleakly at a poorly filleted sole as if it represents a personal assault. On his MOTHER. He simmers with incandescent anger like Brando in On the Waterfront. Demorand doesn't need to talk. Or taste. He pushes his plate away with heavy disdain.

Of course, this makes the few occasions when something satisfies them all the more magical. There is nothing as touching as watching Frédéric Anton's granite features soften with real pleasure at a well glazed confit. I can see how you would do anything to see that smile again.

4. Which is a good thing, because the tests major on gladiatorial cruelty, such as cooking on the flat black roof of a New York skyscraper in 40°C heat, or having to wade through the rising - and, indeed, notoriously dangerous - tide at the Mont St Michel, holding cloched plates. Brilliant. Finger tips are severed with abandon and viewed only as distasteful foreign bodies sullying the produce. On the British version last night, a man cried about his black forest gâteau failing to set, and another had a panic attack when faced with a cod. MAN UP, Britain.

5. Just as a bonus, there is always one week - one only, as a concession to, I dunno, the twenty first century, perhaps - where the candidates are required to get to grips with "foreign" food. Thrill, as the poor soul who has drawn the courte paille of British cuisine is reduced to preparing a lamb chop and some peas in a "reduction" of tarragon.

"But" says Demorand, appalled, poking a pea. "You could have done something really playful and refined with le fish and chip!"

You need to see it, really you do. I know you probably can't, but you must: you will never look at a crayfish in the same way again. I am willing to do the subtitling, BBC. Call me.
Posted by Waffle at 16:07

You slay me, you absolutely do. I'm so happy you're back.

'Greg Wallace with his ventouse-baby head and Michel Roux, cadaverously displeased'. Dude, you are on fire. Welcome back.

This is absolutely why you must never leave us again. No need for it to be shown on BBC4 it's as if we've seen it already. I'm ready to award you the fancy bits to put on the collar of your chef's whites. Did you ever see that documentary about the bakers doing the meuilleur ouvrier test? another splendid thing.

Welcome back- on great form after your break. Great stuff.

Please can you just precis the francais MC eps for us? maybe with some illustrations?

*weeping with laughter*
Waffle, you are beyond brilliant. and speaking of the Entende not very cordiale, I must send you an email about what we learned from our French CEO's motivational talk.... he too has tried 'your feesh cheeps' I don't like to think what he'd do if faced with a small piece of grey lamb in a minty reduction

I think my entire paycheck goes to st aulaye these days.
I don't think I could handle anything better than British MasterChef.

I saw Pennebaker's documentary about the MOF in pastry recently. Maybe I'll try to watch some when I'm in France...

I loved this, thanks! But I am really not feeling the love for the current UK Masterchef lot. It's like a bereavement...

You're back! Making the internet more fun place, brilliant (sorry, it's been a long week of swimming lessons, tantrums, tier 5 visa requests and neuropsychiatry. My brain is fucked, hence sounding like the Paul Whitehouse moron character)

here from the tOTS100 and delighted to be: I never knew it was possible to snort coffee.

Oh lord, I have missed you! Thanks for the laugh!

Sorry to say this, but you are so arrogant! You have a restrictive way of writing. I do not like it at all. All people have their good qualities, even a master chef. And who are you to judge who is better than the other?

Fabulous! I want to see this tv show so much now (and not just for Frederic Anton, who looks rather yummy in that photo). Love your review of it - hilarious!