I have become less tolerant of the tram recently, partly because I use it less, tending to lurk at home in the manner of some kind of pale, furtive trogolodyte, partly because I get more furiously intolerant by the week and partly because sweet baby jesus, they really are so SHIT.
To be scrupulously fair, only half my local trams are shit. The other half are like shiny, silver visitors from the future with a semi-reliable timetable and only a light, mysterious scattering of sunflower seed shells on the floor every time I get on one. But the shit ones, my god, they are sent to smite us, like wheeled scorpions. Lurching, rickety yellow wagons of death, they appear randomly every half hour or so with cavalier disregard for the "timetable". I hate how they're always packed. I hate how they smell. I hate the way, when the traffic is heavy, the drivers delight in accelerating, then braking really heavily, causing my peri-arthritic ankles to buckle, throwing me onto the nearest tramp or supercilious teenage girl. I have become a tram mutterer, fulminating into my sleeve about Youth of Today and the like.
Today, in a beautifully farcical turn of Brussels events, my tram caught fire. It was one of the old, crap ones, decorated in green with the logo of the tram museum to make it look even crapper and older. I had to wait about a half an hour for it to finally show up, packed to the gills with demob happy teenagers celebrating the start of half term. Which was all bad enough, but then the bloody thing caught fire. FIRE, I tell you. I confess I didn't notice, I was too busy glaring at the teenagers like the bitter, furious pensioner I have become. Nor did anyone else, until the back half of it filled up with acrid black smoke.
The teenagers tried to tell the driver.
"Euh, monsieur, monsieur?"
He didn't even look round.
"Monsieur? Le tram? Ca fume".
Stony, eyes forward. A nattily executed sadistic accelerate/brake combo.
"Serieusement, monsieur, il y a de la fumée, là"
Nothing.
Eventually, the doors decided to open by themselves (they had been doing this on and off for ten minutes, which perhaps should have alerted me to the imminent peril) and we all escaped, then stood on the pavement admiring the giant billowing clouds of acrid tram smoke: a combination of rubber, greasy tram seat fabric coated with tramp effluvia, smouldering abandoned Quick frites boxes, and the sloughed off skin of the be-mulleted man who wears the John Galliano vest top in all weathers. The driver stayed, squatting in his cab like a furious, uniformed toad, refusing to react. He's probably still there now, lightly smoked.
To add insult to (near) injury, Place Stéphanie, in the throbbing (or possibly decelerating) heart of Brussels's "uptown" (hahaha) now has a LUSH. 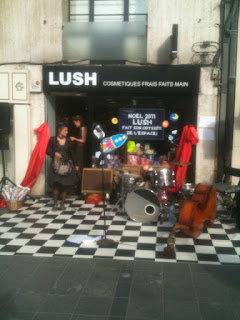 It is right next to Annick Goutal, purveyor of beautiful, subtle scents. If I were Annick Goutal, I would totally sue.
My loathing of Lush is a matter of public record, at least on Facegoop, where despite the blog having been dormant for the best part of a year, fanatical hippies still come and tell us we are mean and unfair and ignorant witches for dissing their favourite purveyor of olfactory WMDs.
I am unrepentant. Indeed, I understand there is an ancient Chinese curse that translates as "May you live next door to Lush for all eternity".
I think what I need is this axe-wielding bird, found via Mimi Smartypants, to sit on my shoulder. He has given me much joy today.

I am going off to mutter in a corner now.
Posted by Waffle at 18:29

Did the teenagers set the car on fire or was that just a random happening?
Too funny. I was once in a bus that was hit by another car, but never in a tram fire.

Darling, when you are old like me and your children are grown up, you will be sweetly tolerant of teenagers. My reaction was "oh, how charmingly polite they were' - and indeed, I'd have spoken to the driver in much the same way . I think they could learn a great deal from the average London teenager.

I've never been in Lush. The smell makes me wheeze even from the pavement and I'm afraid of it triggering asthma.

Stupid tram made us be a hour late to a kids birthday party last week-end.Only because stupid stib web content managers "forgot" (or weren't told at all) to mention there were week end works on the 97 line.

97 service is terrible,3 and 4 services are merely acceptable. As for Lush,I must admit they engulfed me in their sect long time ago (this being said, my liking of their products is not at all related with animal well-being propaganda)but I can't quite understand what they are doing in Louise,being more of a high street shop and it's true that the smell on the street is too strong and a bit sickening...

Re: World of Warcraft parrot:"Watch him axe Justin Bieber and Rebecca Black". Heck, I'd almost PAY for that!

Lush is truly dreadful. I had a grim 6 months working in Croydon and there was a Lush just before the platform at Victoria which made the hellish trip even worse than I had contemplated. The smell is dreadful. I can't understand why they are so popular.

i am remembering your dirty old tram post of 2008

I thought they were very polite too, Z. The bit that left me glaring was their conversation about how much Dom Perignon they were buying. Eh? In my day we had a half pint of John Smiths between ten and we were 'appy, etc etc etc.

Very halloweeny post I find, The tram from hell and monster bird.

Oh to have that axe-wielding bird sitting on my shoulder this evening when all the petulant teenagers come knocking on my door under the pretext of 'trick-or-treat'-ing.
FFS. Grow up or I shall set this bird upon you.

You are a great writer. Loved your Tram story. Very funny. Ah, life in Belgium. I once passed through Belgium many years ago when I was in Europe. Never took the Tram. And now, I don't think I will.
Here in California we have no trams to contend with. Mostly freeways, traffic and road rage. Surviving all that is an art of a different sort. Very cool blog.

I have been lurking, or whatever the correct internet term is, on your blog for some months now, but the tram-on-fire post has forced me into action. I must comment, because for a moment when I was reading it, I thought perhaps we had been on the same tram... But no, it in fact seems to be two entirely separate cases of tram-fire in the space of two weeks.

Mine did not have the luxury of the green tram museum decor but was merely a (sub)standard yellow wagon of death - otherwise your account is eerily reminiscent of my own. The main difference seems to be that several of our passengers were inexplicably reluctant to evacuate, remaining seated and responding to my assertion that there was a flame at the back of the tram by saying 'oui, mais le tram va continuer a Montgomery, n'est-ce pas?'. I left them to burn.

Love the blog, as do many of my british-brussels friends, you are definitely striking a chord there! And yes, Lush is vile and wrong and should be subject to environmental impact assessments.

Facegoop - when's it coming back?!

Talk to M, Alison. The minute she gets her arse back in an appropriate continent. Tsk.

Yes! You are right about Lush. I've always thought it was disgusting.

Is this European integration finally happening? It's like seeing Pimkie in Rome (which is just wrong - but I did).

Hope this finds you well. I am getting to grips with motherhood. Nine months inside, nine outside now. He's growing up....

Yes! You are right about Lush. I've always thought it was disgusting.

Is this European integration finally happening? It's like seeing Pimkie in Rome (which is just wrong - but I did).

Hope this finds you well. I am getting to grips with motherhood. Nine months inside, nine outside now. He's growing up....

We don't have trams here, but we do have highly-efficient subways and buses that WILL get where they are going on time, regardless of who (or what) is in the way. (One of the reasons driving here is so scary.) As far as smells go, you have not experienced anything until you have ridden the Seoul subway at 7:45 am on a weekday. Koreans eat kimchi at every single meal, which means that the train is full of people who just had kimchi for breakfast, and they are all breathing. There are some days where the car doors open and it's like being hit with a big kimchi sledgehammer.
Oh - and I thought the teenagers sounded pretty polite, too. I doubt they would have been that nice about it back home in the US...

There is a Lush here! So that what that cloud of doom that has been hanging over the city these last day is all abound...

always thought place stephanie and the avenue louise a bit 'louche', as they say.

Thought you might enjoy this little animation film:
http://vimeo.com/24975340

I've never been in Lush. The smell makes me wheeze even from the pavement and I'm afraid of it triggering asthma.

lovely post. your blog always makes me feel the world is NOT yet coming to an end. what a bird, btw!! pow, bif, bam!

Cleaning out your handbag has done you in? Hope you OK and back writing soon.