The problem, I think, with a blog like this is that if you update it really regularly, you can fill your posts with pointless fripperies and inconsequential trivia, whereas if you inadvertently fail to update for nearly a week for no better reason than autumnal inertia, you feel a heavy burden of responsibility to have something worthwhile to say about the Eurozone, or about the nature of intimacy, or at least, I dunno, offer a half decent recipe. I have none of the above unless you want to know how to make my signature Old El Paso Tacos.
(Open Old El Paso Box. Put virulent orange taco shells in oven. Fry a packet of mince. It is very important, when frying the mince, that the whole mince portion falls out of the packet into the pan with a heavy thud, ideally lightly splashing you in cooking oil. The bloody paper from the bottom of the packet of mince should still be adhered to the raw meat, requiring you to peel it off, perhaps retching gently if you are not in the américain mood. Add Old El Paso MSG Special Delicious "Seasoning". Put on plates with bad grace and serve with ketchup and shouting. Open a tin of Géant Vert sweetcorn kernels if you're feeling fancy. Drink heavily to forget the smell. )
However, I must write something or the responsibility becomes heavier and heavier to turn myself into Alain de Botton. With that in mind, and throwing off the tyrannous yoke of content expectations, I can tell you the following, fairly humdrum developments:
The dog required four stitches yesterday, after opening his muzzle grotesquely in a wildly improbable 'running too fast in the undergrowth at dusk' scenario. After an overnight stay at the vet's, he is now sporting the infamous colerette de la honte, or cone of shame, thus: 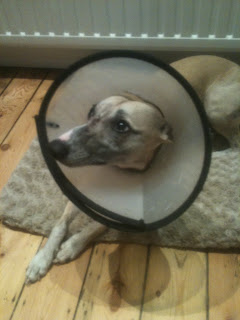 Whilst he has been fairly stoical about the general indignity of it all, he is having difficulty judging his new width, and keeps bashing into things, then staggering back in confusion to general amusement. Poor weepette. He has to keep the Cone of Shame for ten days, until his stitches come out.
I read The Family Fang (that review I have linked to is rather odd, and underplays the humour, I think), which I recommend highly. It is about a couple who are situationist performance artists and how they force their children Annie (Child A) and Buster (Child B) to become part of the "work". It is dark and funny and quite lovely on sibling relationships. I don't think it's the absolute best book that could have been written on this, it's actually quite restrained, when I could see it with a bit more of a fractured, demented, explosive ending, but I really like Kevin Wilson's style, and it's hugely enjoyable. Another stellar recommendation from Irretrievably Broken.
I tried to steal two separate sets of small fat ponies this weekend. The 'Poneys de la Cambre' really are a stellar selection of the fat pony genus, in particular the tiny chestnut whose weeny legs seem impossibly small to carry his vast stomach. He challenges the laws of the physical universe in the manner of a bumble bee, basically. Sadly the ponies are only accessible to 3-7 year olds and neither of my children could be bullied into riding one so I could nuzzle it. Kidnap it. Bundle it onto the tram. I went to look at a couple of stables too, because I'd really like to find somewhere to ride. They were hilariously unchanged from the stables of my youth - loads of teenage girls milling around a yard with very little going on, and some kind of brooding, golum like elder stateswoman in an office-cum-tack room-cum-nest of hoof oil and pony nuts, terrifying everyone. I was torn between a mad desire to jump right back in, standing outside a stable and sniffing manes surreptitiously, and a strong awareness that I am no longer 14.
Speaking of horse lust, and my younger days, I found my Domesday Project entry online, after my friend Violet forwarded her sister's (which majored on descriptions of looking after her stick insects. "Thank god" said Violet "I can't find mine, talking about all the joy to be had from dissecting owl pellets"). If you are my age and lived in the UK, I think you must have taken part in this .. thing. You had to write some stuff about yourself and then the BBC kept it somewhere in a big vault. I am not sure what the point was. Were we recreating the Domesday book? Anyway, whatever. It is now on line, I have found my entry and it is a WEB OF LIES. I am shocked. Shocked! See for yourselves:
HORSERIDING. EMMA BEDDINGTON. AGED 10
In my free time I enjoy going
horseriding. I have my own pony and
my friend and I ride together. We go
in a car to the riding school. On a
typical day our riding teacher might
be taking a pony into the stables when
we arrive. One of the girls who works
there taks Tommy, my horse, out of the
stable and helps me mount. Our
instructor gives me hints as we ride.
Usually towards the end of the lesson
we jump our fences. When we do Tommy
takes firm charge and goes over the
jumps TWO AT A TIME! He is a golden
colour called Palomino. We ride for
an hour, then dismount and return our
ponies to the stables. I remove
Tommy's saddle and bridle. Often he
tris to squash me against the wall.

I never, ever, had my own pony. I think maybe I wanted one so much I thought it counted. I love how I have basically invented a fantasy existence - not merely a pony, but one who jumps two jumps at a time AND some kind of servant girl slave/groom - for myself, then used it to skew the data of a nationwide BBC project. Something to be proud of, right there.
Please, if you are of a similar age to me and British, go and find your Domesday Project contribution in the bowels of the internet, and see if it is as disturbing as mine.
PS: Oh! And if you are in the UK or otherwise able to get Radio 4, you MUST listen to Warhorses of Letters tonight at 11pm, because as epistolatory, gay, equine, romances go, I'd say it was one of the better examples of the genre.
Posted by Waffle at 16:36

Poor Oscar. Still, his indignity is our amusement, so it's got to be worth it - until you get the vet's bill, anyway.

Your first sentence describes exactly the reason I write something every day, however pointless and badly written.

I am pleased by your canny sense of what details to use for verisimilitude in the midst of your horse lies. "Often he tris to squash me against the wall" is such a wonderful touch that, if I were your teacher and knew that you were lying, I would let it go.

Oh lord. I must post this to beat back the yuck of your Old El Paso travesty. Dice 1/4 to 1/2 an onion and cook a few minutes in a little oil on medium-low heat. Add the mince (beef or turkey) (bloody paper peeling optional). Add salt, pepper and cumin generously, stir to break up lumps. Cook til dead/brown. Serve with taco shells or tortillas, shredded lettuce, diced tomatoes, shredded cheese, salsa and refried beans. Enjoy your tacos while avoiding the sight of your children eating theirs.

I love love loved THE FAMILY FANG. You may also like his first book, a collection of short stories, called TUNNELING TO THE CENTER OF THE EARTH - inventive, funny, heartening.

Poor weepette. I have to say, he does wear it with a dignified air. Sort of like a skinny, canine Henry the Eighth with large ruff.

I like your made up story. I once wrote in my diary at school that we had gone to Disneyland in our summer holidays. Since there were five of us and my mum favoured us 'knowing our heritage', the furthest we would have gone was the highlands.

The look on the Weepette's face says it all. The indignity! I hope you've kept the rabbit away from him. That would be too much.

Love your web of lies. It's all in the details. I particularly liked that he had a tendency to squash you against the wall.

Hi, can you please tell me where you found this Domesday thing? I'm not British and have no idea what it is, but Boyfriend is and would have been about the right age. Would be awesome if I found his :D
Thanks x

It's here! A wealth of bizarre information culled from British 10 year olds.

I ride a palomino horse that actually does take two jumps at a time and have a slipped disc as a result! All true, unfortunately... But I hope you do take up riding, would love to read horsey blogs from you!

"Put on plates with bad grace and serve with ketchup and shouting."

Dios mio, this sentence sums up my childhood dinners. Where you there?

That Domesday lie is fabulous. I would never have had the nerve. And the fact that it became part of your Permanent Record...I am in awe.