Food. And some more food. And minor social awkwardness.

For once I actually have some stuff to tell you, because I have been on my micro trip to Paris. If this all sounds a bit over-excited - and it does - bear in mind that I spent most of last week nit-combing and doing my VAT. In the rain. I never leave the house! I am now experiencing sensory overload! There will be too many adjectives! Normal jaded service will resume tomorrow.
First, I left my Sadaharu Aoki green tea eclair - that I had waded through the ten deep crowds in Galeries Lafayette to obtain - in a bar and a man had to chase me down the street waving the small phallic parcel, to return it. I wanted a "Bamboo" really, which is a cake of criminal, insane, deliciousness, but it was too fragile to transport. As it is, the eclair is still in my bag, getting sadder and more squashed by the minute. It's a desecration. Of course, I should have eaten it, but the problem was that I had not factored:
(a) Large lunch at Mamma Roma 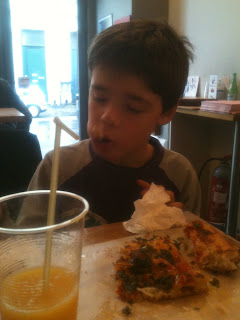 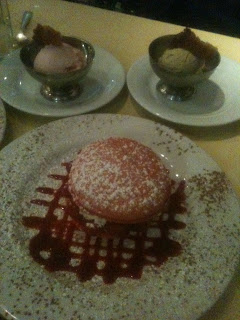 It's what Pierre would have wanted AND the coulis pattern matched my dress AND it was a gift, so obviously we had to eat it, even though I thought cream would start coming out of my ears by the end of it.
(Incidentally, Trish said as we were driving across Paris that she thought her writing was workaday, functional, not brilliant, and I need to tell her how wrong she is. No one evokes the comfort of ritual, the reality of cooking for a family, and the poetry in both better than Trish. You need to go and look at her lovely new blog and you'll see exactly what I mean. She takes the most ordinary kinds of cooking, the plainest foods that ACTUAL PEOPLE eat, and turns them into something beautiful and desirable with her writing which is simple and sensual and full of humour. She's the anti Mirth Void, actually, and I know whose writing I'd rather take to bed with me. So there. )
*Description may not be wholly accurate
Posted by Waffle at 14:51

Curse you, Waffle. I sat down to do some work (actually, "work") FORTY FIVE minutes ago. Right, I'm closing you down - you and your links to lovely, distracting sites.

Oh lordy, you make me cackle. What a very splendid evening, social awkwardness aside.

I love that you met Pierre Herme. Please tell me you showed him your squashed macarons. Please?

Thanks for the blog tip - I've just peeked at the superb photography so I'll have to go back and read more. xx

Birdy - I cursed myself afterwards for not forcing him to sign the box. DAMMIT.

Thanks Waffle, you made me giggle as per usual.

And I agree with everything you say about Trish's writing. I enjoy cooking, but what I struggle with is cooking EVERY day...trying not to churn out the same things againainain. Trying to muster up some entusiasm to come up with different meals...that can be produced very quickly and simply, that everybody will like! Trish has a way of making this feel possible, by writing simply in a way that feels attainable to us mere mortals...and then there are the pictures of course!

Plus she reintroduced me to making flapjacks which take about 5 mins to prepare and allow me to take a trip down a delightful childhood memory lane. Yum.

Ah Waffle, thank you for sharing such a fabulous post! It has been a horrid day of admin-related evilness in Toasterville. I'm so glad yours was the first page I read after emerging from appointment scheduling and list-making hell - am still chuckling at thought of anyone describing themselves in manner of culinarily-challenged lame weasel! Thank you for bringing a giant smile to my crappy grey day

This made me laugh out loud several times.

The points you obtain touched listed here are vital, thus I most certainly will spot many of the information here to create this actually perfect for entirely the newbie’s here. Thank you for these details. Actually helpful!
Logo Designs

his made me laugh out loud several times.