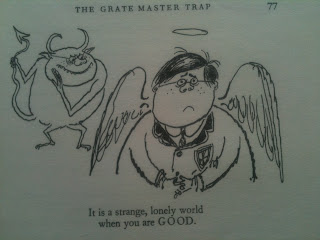 I am currently leading a life of modest virtue. Nothing actually virtuous, you understand. No good works, saving kittens from trees, curing pernicious diseases, donating organs. Just the occasional vegetable, spending no money, drinking less, not going out much (except to the dump with dreary regularity), limited "screen time". I am living through it resentfully, like a teenager with really mean, arsehole parents. It is quite boring: "It is a strange, lonely world when you are GOOD" as Molesworth says.
Advantages of a life of relative virtue
Enjoyable sensation of mild smugness. "Wow, look at me, putting on all this washing, I am such a grown up. Now I will put some pieces of paper away, and maybe sharpen some crayons. I might have a cod liver oil tablet later. I rock". I know, it's pathetic, you don't need to tell me.
Better skin - though still horrendously freckled (my virtue does not extend to locating and using sunscreen) I have lost the full Dot Cotton raddled face. I did manage to get a sunburnt shoulder today though. In the rain. Also, I think I am STILL harbouring Lashes's dreaded suppurating skin disease, even though he shrugged it off about a year ago and has that luminous, glowing, poreless nine year old skin that makes you feel like Methuselah. And I have a cold sore. Ok, maybe not better skin.
Managed to read several books in the time I would normally be falling asleep face down with my glasses on after too much gin, or staying up all night staring fruitlessly at dusty corners of the internet. The only problem is that the books are GOOD, which casts me into further career despair. My "book" is languishing. It needs stuff done. Even if I do the stuff, I am not sure it will work, which is a shame because there are at least 14 words in there I like. Maybe I could just make fridge magnets with those words on instead and sell them on Etsy? I would probably make more money that way.
Slightly - very slightly - improved Chopin playing. This one go plunk. This one is very dusty. This one segue alarmingly into Regina Spektor because it is easier.
Slightly reduced sense of fiscal foreboding. This is completely wrong headed, because I have basically NO money coming in at the moment. Even so, although I am not actually working, I have convinced myself that the mere fact of having opened all the ominous envelopes and tidied them away neatly in hanging folders will be my salvation.
Have managed to lose about 3 ounces in weight. I still can't wear 97% of my clothes, but it is to be welcomed. I got a bit over-excited and decided to try on a thin era bra yesterday. Big mistake. BIG mistake. I can't really describe the full effect without straying into obscenity (suffice to say it reminded me of this post, which taught me another meaning of the word 'pasties'), but it was a whole universe of wrongness. I will attempt to continue losing 3 ounces a month and by the time I am ninety five, perhaps it will fit. Though of course, by then, the moths will have despaired of me ever buying any more cashmere and eaten it.
Disadvantages of a life of relative virtue
Becoming very boring indeed due to total lack of external stimuli. Head entirely empty of thoughts.
Faintly aggrieved sense that surely I ought to get a medal for all this starter level virtue.
Unhealthy attachment to stationery, and the correct arrangement thereof. The correct arrangement of everything, actually. What, you cannot discern the important - though I conceded subtle - distinction between 'mugs that are nice enough to go on the shelf' and 'mugs that are ugly and must be hidden in the cupboard'? Never darken my kitchen again.
A related incredibly low tolerance of stationery related mishaps (see: unpleasant Pritt Stick incident, VERY unpleasant plastic film incident, moderate shouting about 4 colour Bic incident). In my reduced, health and safety checked, U certificate universe, the thought of anyone not having the requisite number of highlighter pens appalls me. Anything could happen. The plastic book covering has bubbled! I have failed! I have started stockpiling supplies in a drawer and instigated a cruel system whereby if the children lose any of their two hundred quid's worth of school fripperies they have to BUY the item back from my drawer of child punishment. I do not like what I have become. 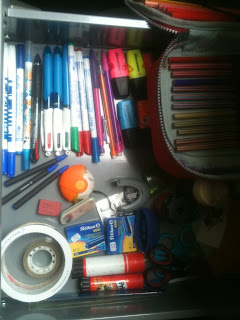 My joyless emporium of child punishment
Forming an unhealthy attachment to French Masterchef. I could claim my interest is anthropological, part of my fascination with the dark, peculiar corners of the French psyche, but that would be a lie, I just like to watch them all suffer and weep and emote over their brunoise and espuma. Anyway, French Masterchef is fascinating and I commend it to you. The jury is composed of Sébastien Demorand, Yves Camdeborde, and Bald Guy Who Never Speaks. Demorand, lanky and pale, with a neat beard and glasses and a penchant for beige toned formal wear, is like your enthusiastic young geography teacher gone very badly wrong. Rather than rhapsodising about oxbow lakes, he is filled with the white hot heat of fury at under-seasoned oyster tempura, and insufficiently "abouti" (they like these abstract adjectives. This might be translated as something like 'complete') reinterpretations of blanquette de veau. Yves Camdeborde is a chef. He is full of Southern down to earthiness and machismo, whilst also being a man who spends his working life arsing around slicing things on a perfect 23° angle and putting teeny weeny dots of sauce and edible flowers on plates. I like this chef dissonance. The other one mainly looks thunderous and doesn't speak much but when he does, he's furious about a lack of "respect" for ingredients. All three of them are very much in the 'more in anger than in sorrow' mode of culinary mentoring. None of them is a hundredth as revolting as Greg Wallace, so as far as I am concerned it is a televisual win.
Still do not know more about Belgian political situation. There was a rumour of progress over the summer, but that optimism seems to have receded somewhat. This week may be "decisive". Or it may not. "How many times have we declared that it's make or break time, only for nothing terribly spectacular to happen?" Well, indeed. Bart de Wever hasn't eaten anyone yet, so as far as I am concerned the negotiations are still quite dull. B minus, Belgium, for your constitutional crisis. Things that would improve it:
- BdW eating someone
- Jean Claude Van Damme getting involved: why on earth has this not happened yet? I am frankly appalled that he hasn't seized what would be a career crowning opportunity to bellow senselessly about "rigour" and "discipline".
- Secession of Belgian state to the European Union, renaming of country DG BELG, everyone given a nice fonctionnaire job with 800 days holiday, 3% tax and retirement age of 36.
In conclusion, I think a life of modest virtue is not working out for me. Once everything is tidy and tranquil, I sit in the middle of it feeling faintly empty, and waiting for something interesting to happen. Which of course, it doesn't because I am spending all my days categorising Lego bricks and date sorting my invoices. I should return to my rat's nest of chaos. Just let me finish this spreadsheet first.
Posted by Waffle at 10:45

I found myself hoovering the sofa the other day. That's when I knew I was becoming dangerously boring.

Have you been watching the Great British Bake-Off? The judges are unrelentingly harsh. Mary Berry in particular. She has terrifying steely blue eyes. Every time I watch it I thank God she's not my mother-in-law.

I understand the mug thing absolutely, but where is the third category: Mugs that are so precious that they are hidden away so that nobody can use/break them? Among these I include a complete set of Farnborough Air Show commemorative mugs 1988-1994 and the '100 years of King Alfred Buses/50 Years of Diesel trains in Hampsire' joint commemorative.

I initially read the name of the second French Masterchef judge as Yves Camembert.

Beyond upset it isn't actually that.

You are being good, aren't you. That heralds an imminent bout of Russel Brand badness in 3-2-1....

I thought I WAS being good and was mortified to realise that a) I had failed to tax the cars as instructed b) failed to bank a rather large cheque (not mine lol!) and c) utterly failed to notice that the freezer was defrosting.

I think one might as well be bad, because there is nothing quite as demoralising as failing at being good. At least if you're bad, anything good that you do comes as a nice bonus.

Anyway, you've impressed me with your pen drawer.

I feel you on the vague outrage noone names streets after me when I do 'good' things. Maybe a medal, anything, anyone...?

I can't believe you've found a worse way for country to be run than present (non)system! DG BELG has me running for cover at the mere thought. That said, if they made me one of the fonctionnaires, maybe it'd be ok...

Have you started describing your diet and/or bowel functions in minute detail to all and sundry yet? I think that would be a warning sign that you have Gone Too Far with the Clean Living. Your pen neurosis still falls within 'normal' ranges, I believe.

I have no access to the Great British Bake-Off (or pretty much any other English-speaking television) here in Seoul, but, as this is the 2nd blog in 1 day that has mentioned it, I can see I'd better figure out how to find it on Hulu or Netflix or something. I feel left out.

My level of weight loss is about three ounces a month too, and I totally get the mug thing too. My husband, sadly, does not.

Virtue is all well and good - congratulations you - today I have done all the washing and actually followed through to putting it away, been to Curry's to buy that printer cartridge we've needed for three weeks, phoned british gas to sort out our account, done the virus scan on my computer and hoovered all my rugs. I am also feeling quite virtuous.

I have not however actually done any work. doh!

This is very timely for me, as I am just about to think about considering sloughing off my summer holidays 'greedy alcoholic sloth' persona and trying for virtue instead (school and work both start tomorrow). You are right though: it's really not worth the bother *eschews gym, opens more wine, reaches for crisps followed by gingerbread with thick layer of butter on it*

Before I was married (which is two-thirds of my lifetime ago) I only needed one mug, which was washed once a day. I drank milkless tea in the morning, progressed to coffee and ended with hot chocolate, then rinsed it out and left it on the draining board for the morning. It was quite a nice mug, but I don't remember what happened to it.

What I want to know is, how do the bastard moths know to only eat the cashmere? Bastards. All my best woollies need darning before winter. It won't happen of course, I'll put on a jumper and come downstairs and sew up the holes while wearing it.

I covet your pen drawer

Agree entirely about the constitutional criZzzzzz.

You do realize your drawer of school supplies and the idea behind it is SO. VERY. BELGIAN. My god, you're going native.