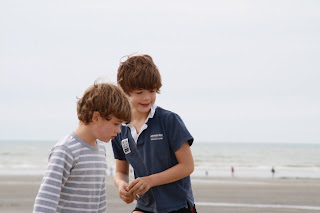 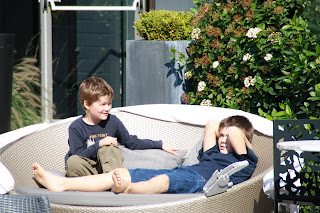 Even so, I am quite excited to find out what they get up to next.
Tea making, perhaps? I could get behind that.
Posted by Waffle at 00:28

I have loved every minute of being the mother of two boys, even now when their shoes are so enormous and I'm always tripping over them. Mine have gone through some fascinating phases and varied interests (magic, gymnastics, geocaching, lacrosse, making your own flour from mesquite pods, you know the sort of things I'm talking about) that have always been a delight. At the moment, Son #2 is teaching himself to play the Ukulele. Never a dull moment here.

They are getting way too tall. Please do what I've asked my brother to do with my niece: Press down on their heads daily to keep them small.

Boys look lovely in the sun! I notice there is a viburnum bush behind the lounger - lucky you! The loveliest fragrance in the garden.
Heather (NZ)

Had to read this with the usual sidewalk business calls in my ear, 'courtesy' of the usual suspect. May be a case of too much blokeish confidence (sort of like lead poisoning...it drives you crazy). If only Prog Rock could come squeeze it out of his hindquarters.

Heather - I'm afraid that's not my garden, which contains neither live vegetation, post Satanbunny, nor gigantic loungers. If only...

There are no Daim bars in Nottingham Ikea either! A strike at the Daim mine, I'd say.

PS Given that I've been lurking for months I thought I should say that your blog offers much-needed respite when I am bored of translating articles about the new-look packaging some supermarket in Italy has introduced for their value range. Merci bien! :)

We pick trompettes de la mort here in Hampshire, in the New Forest - they are also called horns of plenty. They are dark purple/black, hence the name, but are not poisonous, on the contrary - they are quite delicious.

Trying to bore holes in my brain by learning XML in my spare time and look what rocked up in the tutorial!

As the old post office ad goes - "I saw this and thought of you..."

Damn these computers! It has taken out all thge coding and just displayed it properly F*@LHYDF*!

In Scotland (as I'm sure you are aware) we have the English name and the (approximate, somewhat phonetic and probably quite made up) Gaelic name for towns on signs. You'd think Blegium could just do that?

The Ikea outside of Philadelphia is getting rid of/has gotten rid of their Daim supply as well. I am heartbroken. It would appear that the Happiest Place on Earth has had a falling out with the Daims.
I hope they don't ditch the caramel laces too.

Place names - have you noticed that Leuven is Louvain in French but then they have put Louvain la Neuve just the other side of the border - I don't know what the Flemings call it, but I bet it doesn't help anyone trying to find either of them...

(Boys are lovely, I agree, I have two, one of whom now pats me on the head and has to bend down for me to kiss him...)

I feel your pain with cheap, pointless programming. When I fly budget to UK the drop-down screens on the bright, shiny Boeing 737 show nothing but awful Dutch 'candid-camera' type shows of a type produced specifically to torment cheapskate passengers. I suppose it could be worse, on Austrian airlines one is treated to non-stop Strauss from the moment of boarding and for the duration of the flight.

Cactus socks sound dangerous. If yopu want to start a cottage-industry then do like my sis (also a lawyer) and knit smartphone-cosies.

Must see cactus outfits!! Pictures, please....
your boys are lovely!

Giggled a lot, thank you! You should be kind to Belgium and tell people about the nifty roadsigns in Brussels (when they exist) that say e.g.
Rue
Michelangelo
Straat
which is a very efficient way of combining a Romance and a German language.
Tilia

mons = mountains in old-time-speak, non? and berg(en) = mountain(s) in flemish. voilà, no cognate, but they at least mean the same thing. where, exactly, the 'mountains' are in belgium is another thing altogether.

Hello. I love your blog. No Daims or Marabou
in IKEA in Dublin either, very upsetting. Asked a lady who
told me they won't be stocking them anymore,
only their ick own brand chocolate.
Your two boys sound lovely. I have two boys too, one turned 2 on Wednesday, the other is 10 weeks.
They are wonderful but all consuming, it's good to see that
they do grow up :)

Funny I've got the same feeling towards my children,especially my boy of 7, he's getting wiser,nicer,has started to make jokes that makes sense (relief!) and even beginning to listen to the news (if weather forecast counts as news)

Belgian-names for town-and-villages are a legend in the family since my mum spent a entire morning looking for Tubize (Tubeke)and I still can't make out the difference between Mach and Mech -elen.The one I never get wrong is Gent (not to be mistaken with GenK).

Your boys are lovely.

Thanks For Your valuable posting, it was very informative
microsoft office 2010 professional download

I found a lot of interesting information here. A really good post, very thankful and hopeful that you will write many more posts like this one.