"Rabbit found. Big. Black. Old" it reads, enticingly. The picture they have taken to accompany it makes the rabbit look piebald, which is also helpful. 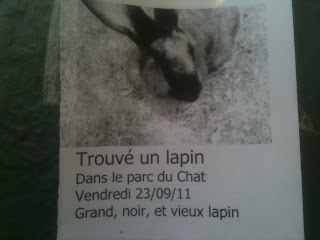 Warning: does not ressemble actual rabbit
We go to the pet shop and buy hay and rabbit food. It is unsurprisingly far dearer than I remember, from my days at the Minster Pet Shop, staring wistfully at the chinchillas and buying hamster after boring hamster. I refuse requests to buy a rabbit leash. Once bitten, twice shy: rabbits do not walk to heel.
"Oh!" says Lashes peering into the pet shop cages. "The baby rabbits looks so cute!" There's a sort of note of regret in his voice, I think, at introducing Kali the dark destroyer into our garden.
"Well you can't have one, I'm afraid". Satan/Kali would probably eat them. "No more animals until you're ten. And not a reticulated python then. I haven't changed my mind".
So. It appears we have a rabbit living under a bench in our back garden. We are not really calling it Satan (or Kali). I'm resisting giving it a name at all, actually, in the faint hope that someone will have second thoughts and reclaim it. 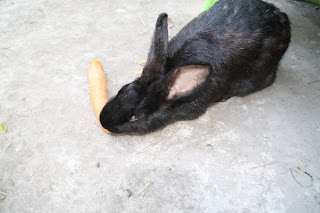 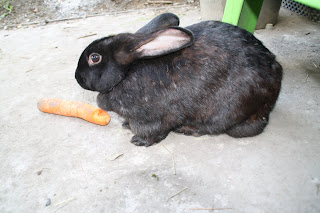 Warning: photograph may present distorted impression of benign cuteness
What would you call a gigantic, elderly, ravenous, supercilious rabbit?
Posted by Waffle at 13:13

Oh God, it does look cute on the photos, the bastard.
There's a good list of names here: http://www.markbeast.com/satan/names-of-satan.htm (whatever you do, don't look at anything else on that page, it's beyond ridic)
I kinda like Anointed covering cherub.
PS: WF is Sumenou. Sounds like an excellent name. For a rabbit or the devil.

You may come to regret this kind impulse. Or you may not, of course. I'm sure he's sweet really.

I recommend the name 'Jeff.' This is what our younger son - then aged 8 - named his Russian Tortoise, despite our (far cleverer) suggestions of Ivan, Peter (the Great) and Boris. At one point, he began to waver, but only because he thought he might prefer to name the tortoise 'Kyle' instead.

I am glad I'm not the only person who has ever had an ill-tempered (read: evil) rabbit. Whenever I tell anyone about it they cannot understand how anyone could hate a rabbit. They obviously never had one that killed the guinea pig and left scars on their arm from biting and holding on for grim death when attempting to put it back in the hutch. To add insult to injury, the thing was called Fluffy.
This one looks like a kindred spirit.

Ellie - Laughing and laughing about 'Fluffy'. It killed your guinea? Holy shit. Mine just sexually assaulted ours. That was bad enough. It got stress induced abscesses we had to drain manually (HEAVE).

Laruca - Anointed covering cherub is indeed an excellent name, and Sumenou sounds like some kind of dangerous voodoo lord. Which works for me.

The Killer Rabbit of Caerbannog. You could just all in "Caerbannog" for short :-)

What an excellent post! Going to read it again just to savour your excellent writing :)
I could read you all day...:)

Waffle- it really did kill our guinea pig. My brother is still bitter as the guinea was his and the feral rabbit-beast belonged to me.

You know, you could eliminate the problem by getting a python... (Although admittedly then you'd have a different problem on your hands. But I bet a snake wouldn't eat your plants.)

I agree entirely with your views on rabbits, although I also think they are the most miserably-treated of all pets so do not begrudge them their demeanour one bit. I am horrifically allergic to them so it is only natural that although we have had dogs, cats, ferrets, guinea pigs, hamsters, rats, tortoises, stick insects, chickens, quail, budgies and fish, they are the only pet my younger son desires.
I saw a black one in our local parc de caca last year and went to some lengths, running about in bracken in the twilight trying to catch it. Since then I have learnt that, unlike Satan/Kali it was probably just an infrequently occurring black wild rabbit and would have had my arm off.
I warn you, my childhood rabbit lived to FOURTEEN.

Shame it's not female (and are you sure it isn't?) because then you could call her Clarissa, after Clarissa Dickson Wright. Well, you did say 'gigantic, elderly, ravenous and supercilious', didn't you?

Also I have good friends who took on two rabbits, which quickly became 7. They live all year round in their back garden and my friends have not had to mow the lawn once in the nearly 3 years they've had them - so there is an upside.

Clarence or Cedric
Or Charles...

Winston. I think. I had thought Preston, but it wasn't supercilious enough. Winston is, I think.

I think it's pronounced, "Bob."

Years ago we had an albino dwarf rabbit. It would allow no one but me to touch it or put my hand in its cage. It lunged and grunted at everyone else. How did I earn that love? By wrapping it in a towel three times a day and applying oinment to an infected eye, then massaging with the eyelid and then petting its head for 15 minutes to ensure the ointment had been absorbed into the surface of the eyeball. Damned rabbit was a masochist, obvs.

Your can now definately open a private zoo.

Cardinal Richieleu (I can't spell)-Cardy or Rich for short. Btw I have a cousin named Winston Preston-he's an officer in the US Navy and not at all rabbitty or supercilious.

How I wish you'd found a honeybadger at the park instead.

And you took it home! You're too saintly for your own good. I've seen abandomed rabbits, and tortoises and fish all around Brussels, and would never dream of taking them home.
How about Robald?
Tilia

Rosie - I'll admit I'm tempted, but I've seen what the bugger eats (everything up to and including small children).

Ir Br - I wish I'd found a honey badger too. That's definitely what Uccle is missing.

WoD - That sounds a lot like my several years of guinea pig abscess squeezing, though I manned the squealing, distressed front end, whilst Prog Rock did the grisly Business down the other. Greater love hath no substitute parent.

Mrs J - I obviously have no idea of gender, I am basing this on its high aggression levels, but I think that is species, rather than gender specific. These comments just confirm it in every posssible way.

Tilia - Oh god. Robald seems to have been phased out this year to everyone's relief. He has been replaced by a weedy type called Angélique Dupont who has obviously escaped from our c1978 French text book 'Tricolore'. If you see abandoned tortoises again, please tell me, the CFO will go and save them happily..


Maybe I need to give it one of those elaborate, long show names? "Caerbannog's Clarissa of Cyarbsou", known as Satan. That could work.

Rumpole is brilliant. He might grow into the name, being irascible but essentially benevolent.

What? No one has suggested 'General Woundwort' yet? I am amazed.

When I was a spotty 5th former at a very bad secondary modern school in yorkshire (ha! secondary modern google it people) my parents went away for their easter hols and left me alone in the leaky barrett house (google again) and I watched a scary film called la lapin big fucking huge killer bunnies ate families lots of families who were stupid enough to think that the bunnies were cute you have been warned............Jx

Bunnies! I love bunnies. Yours has a nice, alert eye. He reminds me of our dear bunny George, who died about a year ago. I just love it that you found a random bunny in the park and he consented to come home with you.

Our George, if you put the tip of your nose in his claw, would grip it, much like a newborn baby will grip your finger. We tried the bunny leash too, without much success although we did literally stop traffic the few times we did take him out on it.

I can't think of a good name. Hamlet? I don't know why that popped into my head. It's totally unsuitable. Fortinbras?

Coming late to this but I might have the answer to mystery...

Back when my parents lived in leafy Uccle, and had a house with a big front garden, we came home once to find a large rabbit like Rumpole romping about on the lawn. After a vain attempt to find the owner, we ended up keeping it. It was clearly used to people, but was far from a cuddly child's pet (I remember it used to growl at the dog, who would cower away in fear).

Eventually the mystery was solved by the vet, when it developed a strange inner ear problem which meant that it could only hop in circles. Mum took it to the vet, who was dumbfounded that anyone would pay good money to treat a creature bred to be eaten (and which had clearly just escaped from Mr. Tweedy's Farm).

So that's what you have: the main ingredient of a Lapin a la Geuze. Ahh, Belgium!

Dobbin. Daughter had a jerboa we called Dobbin until it demonstrated an almost supernatural ability to escape from any cage we put it in, from whence it was called 'Houdini'. In the end we had to house him in a terrarium that son's snake had outgrown (sans snake, much to son's disgust).

Are you sure it is an aged rabbit and not a baby Capybara?

Hang on FC. Your daughter had a JERBOA? Like, a pygmy jerboa? Amazing.

Gigi - Your story sounds uncannily similar to ours. Though I think this one is past his best for the pot.

Word verification is lazooeb, which sounds a bit like Beelzebub backwards - also a good name for a rabbit.

Wasn't the rabbit in one of those old black and white Jimmy Stewart movies named "Clarence"?

What about Arfer? As in: Arfer Rabbit? I know I shouldn't laugh at your misfortune, but your post was really most amusing.

General Woundwort came instantly to mind, obviously, but the Black Rabbit of Inlé seems no less appropriate.
On another note, I saw this competition and I thought you might like it.
Gosh, I haven't been here for a long time, I have so much catching up to do :)

So that's the rabbit story then ! Looks like there's a whole lot of abandoned pets out on the streets over here, my gran once found a hedgehodge and a tortoise (not on the same day) in Uccle too while I went out to buy croissants one sunday morning and coming back with a kitten that could beat this rabbit in a "all that you can eat" competitiong and at least the rabbit doesn't have the nasty habit of destroying bags of all kind....