I forgot, when discussing mushroom things earlier, that both children have been required to learn a mushroom song whose pleasing stupidity I have been greatly enjoying this week. I say song, but it's more of an incantation, since the "tune" seems only to feature three notes. 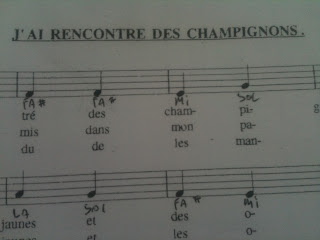 "I met some mushrooms", it goes, improbably. "White ones yellow ones small ones fat ones thin ones long ones short ones". Etcetera. All the mushrooms, quoi. We get the picture.
Then there is some prolonged business about picking the mushrooms and taking them home to maman in a panier followed by another jaunty taxonomy of mushrooms (big, small, yellow, very small, zzzzzzzz). Whatever. The whole thing is unspeakably sordid. What you do in your spare time with spored fungi is of no concern to me, mushroom song protagonist.
The bit I like, though, comes at the end, and I strongly suspect to be a recent health and safety inspired addition.
C'est défendu de les manger alors je les ai replanté!
It is forbidden to eat them, so I planted them again!
Oh? Ah bon? So why did you pick them in the first place, you utter sap? AND WHY ARE WE SINGING ABOUT THIS, THIS ABORTIVE NATURE DESTROYING MISSION?
It is a far cry from Park Grove primary, where if memory serves, we mainly learnt Flanders and Swann numbers.
In other news, rabbit/canine tension is in a period of uneasy détente for the moment. Initially when weepette ventures into the back yard, Satan chases him around. He is most insistent about this, the chasing, even when weepette has only come out for a quiet pee. Weepette runs away, looking appalled, then comes back, as if drawn, against his will, into Satan's orbit, only to be chased away again. Occasionally they try and sniff each other, an enterprise which is entirely doomed to failure due to their height difference, and once, in an act of astonishing daring, Weepette stole Satan's carrot and sat with it defiantly between his front paws for 30 seconds before giving up in terror and slinking back into the house. When they are not busy with this farcical routine, they seem to have settled into a fairly amicable cohabitation, thus: 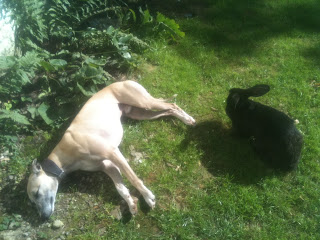 Sweet, though personally I would not allow the dark lord that close to my defenceless, recumbent form.
This is all I have for you today, pet drivel and an impotent rant about mushrooms. However I can now spell 'young woman' in Dutch, so it wasn't an entirely wasted day (it was, really it was).
Posted by Waffle at 21:06

I read the beginning of your post while listening to

It was quite a horrible experience. The story about Satan made up for it though.

Bunnies are evil, greyhouds/whippets/lurchers are divine, as amazing madam parma violet knows. Satan is a scary bad rabbit, a la terrifying ones in childhood terror, 'Watership Down'. Bunnies are nasty.

I did laugh when I saw you'd adopted a rabbit. One step closer to an owl...

I think I missed something. You have a real live rabbit in your garden with your levrier And he (dog) is not scattering its rabbity parts across the garden in a vigorous shaking action? I am bewildered. Does he have a spine? Any canine pride? I'm not advocating violence, merely expressing surprise at his frankly unnatural insouciance.

Ann - Where is Miss Underscore, eh? I am getting concerned.

Mya - No spine, no pride. Indeed, he is allowing himself to be comprehensively bullied by a geriatric rabbit. If I was American I would be taking him to a weepette sweatlodge to rediscover his instincts.

Anon - WHAT THE FUCK. That is entirely horrifying, what IS it.

Each year at my junior school (that's with under 11's) the unhinged music teacher put on a performance of a Gilbert and Sullivan operetta. The best one that I remember was when the pirates (of Penzance) and the policemen got a bit carried away in the fight scene. It was brilliant. They had to intervene and restart the singing/acting thing before someone got properly hurt.

I definitely think the rabbit Satan should be named from word verification. Molorian.

Didn't realize they actually prime them for drug tourism down there (Robald is making a lot more sense). You left off the verse where the protagonist sees 'a trip through the universe' advertised in a smartshop window for about 17 bucks (too rich for my wimpy consciousness blood).

Took a Myers-Briggs test (it's happened before, my first-best-friend-in-school's father made quite a cottage industry of this stuff, though in his house I only learned about white shag carpeting and butterfly chairs), they compared me to Calvin. Thanks!

I remember a couple of years ago, we were having lunch on the lawn so I took Tilly (the dog) her lunch in a bowl. The affronted look on her face when a chicken started to help herself was quite a joy.

When I first saw that photo, it looked like Weepette's eye was open and rolling anxiously in the direction of Satan, which seemed appropriate. How disappointed I was to discover that was not the case. This arrangement would have never worked with our dog and any rabbit- no matter how diabolical- and would have resulted in terrible carnage and my children blaming me for the trauma they would experience from having seen the whole thing.

It looks like poor Oscar doesn't dare to move an inch because of that,hum, evil creature (I hope it's not a she ;) )

as to the mushrooms song,ahem, I'll stick to the native americans lullabies which my children are learning right now. not that I need lullabies,I was out picking up leaves yesterday night because my son had forgot to tell me that "madame" wanted dead leaves for friday (what for ? no idea, mushrooms broth ?) the whole neighbourhood now thinks I'm insane...

For login in the above website, it is essential to provide myTHDHR your login information Please provide the important information

The United States and learning in Mandarin like Highlights, Resources, Schools, Portal, Calendars. At Dadeschools, login facilitates because of it is divided. Official Page Authorizing into MDCPS. Retrieval of password and username.