Last night my friend R and I went to a slightly bizarre event on the Brussels equivalent of Bond Street. I have showed you a picture of this place before, noting carefully how on the Brussels equivalent of Bond Street, Tiffany is opposite tawdry fast food chain Quick, and next to the dropping off point for the vans of beggars who sit around the town centre. There are at least two, sometimes more, waffle vans parked on the street corner. It is very aspirational.
I nearly backed out, even though it was my idea. Firstly, because at the moment I look like I have been living in a skip and eating squirrel carrion and empty KFC boxes for months. I have a vague notion I need to wear "clothes", which worries me. I used to have some, I think. Now I just have pyjama trousers and sacklike Cos dresses that make me look like a mid '80s suburban pottery teacher. Secondly, I am fatter than I would ideally like, so even if I had any of these "clothes" I hear so much about, I would not fit into them. Thirdly, I'm having a moderately agoraphobic spell at the moment. Both of the people who used to regularly drag me out of the house have left Brussels, leaving me stagnating in my cosy nest of self-loathing and sagging confidence. On top of that, the freelance thing means I spend my days watching my double chin in my laptop screen as I fail to make any money and it's leaving me a bit .. broken.
(Yes, I am lame, and pathetic, and need to grow up. I can provide a signed and notarised affidavit to this effect if necessary. I got a comment saying something broadly along these lines recently and it was as if the contents of my own head had ghostwritten it themselves)
Anyway, I had a babysitter booked, and I was thoroughly sick of my own company, and R had made her husband come home early so we could go, so I put on a nearly clean sacklike Cos dress and off we went.
This is not a story with a moral, or an amazing redemptive tale, whereby within half an hour of arriving at the party someone had offered me a job sitting next to the tapir enclosure at Antwerp Zoo, writing wry monologues and occasionally testing lipsticks; thereby turning my whole life around.
No, it is more of an aide-memoire to myself to remember that leaving the house is broadly speaking a good thing. It was a rather odd concept, this event: each shop was supposedly serving a different wine, but since you - we - were only invited by 2 shops, we could only, theoretically try two, whereas it would surely have made more sense if you could wander around more. But we had an amusing time, admiring some gorgeous Ferragamo flats (I have tried and failed to find you a picture, and just ended mad with shoe lust) and staring at other attendees, who were extraordinarily dressed up, and included a couple wearing co-ordinating natty shoes pushing four chihuahuas around in a customised pushchair, like so: 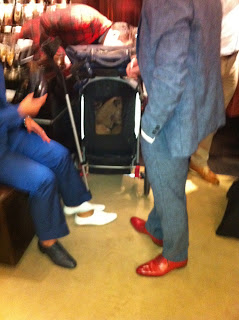 It was so peculiar, their writhing nest of tiny dogs in the middle of a high end shoe shop where everyone was drinking champagne in their finery, though no one else seemed to find it anything out of the ordinary. I like to think of this as the Brussels "When I am an old woman I shall wear purple": "When I am an old woman I will take my dogs to luxury boutiques in a buggy and not give a shit what anyone thinks, then I will take them to the Cirio and sit them on my knee and feed them biscuits while I drink seven half and halfs". I aspire to it, though not with chihuahuas. Perhaps ferrets.

There were also some enjoyable dreadful outfits and some very very short men, or possibly my alcohol induced height dysmorphia, where I think I am far taller than I am, had kicked in. R not only charmed us into a shop we were not invited to but which looked more fun, but also proved incredibly deft at hearing the click of a champagne flute at 400 paces and drawing waiters into her orbit and there were some quite nice mini bagel type things and raspberry tarts. When I started to think that placing a sub-par canapé (a sort of cheese biscuit with a grape sliver and some white ... ugh. Stuff) in the matte black box of (matte black) pop socks in the Armani shop would be hilarious, we went home.
It was good fun and my conclusion is that I must go out more, without my adored and terribly missed human crutches. Brussels is full of funny, strange, occasionally disturbing things to do, and when I'm not being a dickhead, I love to go out and find them. It's a bizarrely entertaining place, this city. Even the New York Times says so, innit, so it must be true.
This weekend I am starting well by going to the European Space Center, deep in the Straw Dogs heart of the Ardennes, for a "Mission Discovery" weekend of space themed activities. The Space Center's address is "Rue devant les hêtres", which amuses me. "Street in front of the beech trees". Why not "Rue derrière Pâcquerette et devant le Massey Ferguson de Jean-Henri" while we're at it? Turn left at the one horned Friesian, by the gorse bush that looks like a banana. There is no trace of this street on Google maps, I note.
We are building micro rockets, testing zero gravity, erm, things and sleeping in "space design themed" dormitories (bring your own sheets). "The grey crumbling replica space shuttle looks so much better in harsh sunlight", says Dee, who lives nearby, encouragingly. There is even a bowling trip. I think the children think they are actually going into space, which may prove awkward. "There are no words" said BMF, darkly, when I explained it to him. I promise to report back.
Posted by Waffle at 20:08

I know what you mean. I have to tell myself sternly to go out. Less easy without man. I have however shed the fat with the help of Dr Dukan, and sent my strawberry mousse Cos dress that made me look like a food parcel of some kind to the charity shop. Alas, these two things have not sent me out gaily into Bond Street at all. So your post is timely.

Excellent advice. I shall aspire to live up to it.

WV = rosesser, which sounds quite nice and garden-y

Totally agree. I woke up at 5.30 this morning weeping, and just wanted to spend the day huddled into a self-protective ball. Thank god I'd arranged to see a friend and forced myself out (been through separations before). I feel normal again now.

Not only did that man go out pushing a litter of puppies in a stroller, he did it while wearing bright red shoes. Well played.

I saw those pushchairs in Pets At Home and threatened to get one for our four ferrets if I am not allowed to have a baby or two immediately.

As it is, I already use a child's pushchair for purposes of food shopping, in the manner of a bag lady, and have, on occasion, perched a ferret atop for the ride.

Third age will come easily to me I think.

Oooh I just did nearly that same thing at a Fashion Night Out event - was in Prada with my daughter drinking pretend champagne and planning evil things to do with revolting canapes in expensive sparkly shoes. When discovered a pink furry handbag that looked EXACTLY the same as the pink furry pencil cases circa 1970 I used to buy was £700 we left. In a huff.

erm.....this bond street place has a mobile WAFFLE cart? on my off days i might be moved to go out to some showy downtown square to buy a waffle, but that's about it. actually, that's a fine idea for a food cart. why don't they ever think of things like that over here?

oOh I love Brussels (and their waffle car although my waistline doesn't thank me)
Glad you had a nice evening, it's a really nice concept.
Good luck with the science experience

Oddly relaxing: Roombas and prariedogs. For your viewing pleasure...

Isabelle Anne - That is, indeed, perfect viewing. Thank you!