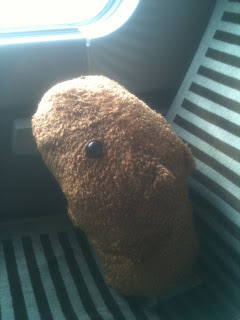 Kapibarasan, beady with disapproval
Eurostar have just texted me asking for comments on their service, which is nice as I have many comments, which I outlined at dull length to them. 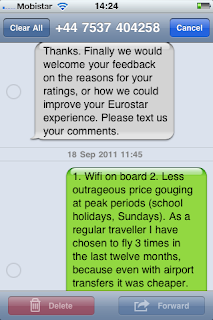 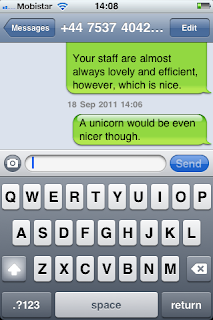 As an American, I love trains but am so rarely exposed to them that being obliged to open the doors throws me into a panic EVERY TIME.

Sorry about my chatty senior compatriot. I'm all the more sorry because I'm pretty sure I'm slowly turning into one of them.

WV: "tamea," which is nearly the name of a really cute animal, I think?

London to Brussels in two hours is pretty awesome. In America, we are sadly behind the rest of the world in the implementation of high speed rail. Amtrak from my city to Washington DC takes two hours, and the distance is half that of Brussels-London. Basically, any train trip takes as least as long as it does to drive the same route, and sometimes more such as the 20 hour train trip from Virginia to Chicago which takes 12 hours in a car.

I hate opening the doors too. As I usually travel with 2 teenagers who sit together I always get the odd (aisle) seat and usually end up next to some weirdo who fidgets non stop and gets up to go to the loo and/or 'restaurant' car 19 times in 2 hours. NO FIDGETING ALLOWED, and only one trip disturbing the person in the aisle seat allowed. Perhaps a red card banishing such people to the business twat carriage?

I always wonder on Eurostar whether you actually have to open the doors. Since you're at the end of the line, don't they open them all anyway? Perhaps next time you could tell everyone not to press the button, and then we could find out?

I used to love Eurostar until I got chatted up by a prize weirdo last week. 2 hours in a tube being intermittently harassed is really bad.

And most of all, how about upgrades for people who take the blasted thing every sodding week. Not everytime, but maybe just once in a while?

Do hope you pressed 'send'.

Suspect that Eurostar Operative isn't the best career choice for a unicorn though.

I've taken to going into St Pancras via the hotel so tend to only view the enormous shoes and lower legs of the kissing pair. The teeming hordes round the bottom of the sculpture are more fun. Long gone are my days of glamour Eurostar travelling. The 6.30 am to Poole is the best I am managing this week....

I did the Paris London trek...

Introduce one way only boarding in the coaches to avoid 60 people with lap tops meeting one old biddy with sixteen shopping bags and a determined cast of mind when it comes to right of way.
Shut the connecting doors until take off..or whatever it is.

Thank you for a lovely laugh. Couldn't agree more with the suggestions!

Yes, the price! I live up in the grim north anyway, so flying from Manchester is always going to work out cheaper, and easier but the amount of times even the base eurostar journey (London-Paris/Bruxelles) has cost more than my flight astounds me. I think it has been cheaper once, and it was only by about 10p, but normally it's been like £50 each way worse. (I have a frugal Nana who makes me compare.) When flying with Air France is cheaper than you, you're doing it wrong Eurostar.

(Also, I have noticed the two Kath's in the comments here, I shall change to NorthernKath. And compliment the other Kath on having an excellent name.)

I would move to ban English day-trippers and similar riff-raff. Last time I took Eurostar I witnessed two of my compatriots having a laugh at the expense of the steward (a quiet and sympathetic youn man who, as far as I was able to hear spoke at least five languages proficiently) by telling him repeatedly and at great length that 'They can't make a proper cup of tea like they do at home'.

Also, do they still do quarter-bottles of Mumm Cordon Rouge on board? Just the thing to use up the last of your Euros on the way home.

Oh God yes, the agony of the train doors. I feel your pain.

Never been on Eurostarl, but I think that the addition of a unicorn - or, indeed, a petting zoo could only be A Good Thing.

I would imagine that a creche full of x-boxes and nintendo 3DS would take care of any bored children (ie those reps discussing the 3rd quarter's sales figures).

Emma you redeem my faith in the travelling public - you are my ideal companion in that respect, except I would voice your views out loud and probably embarrass every Brit within a five mile radius.

p.s. I just read your comment about the middle managers to OH and he is still laughing. Not sure what that says about him, or me, for that matter.

On the London side, how about getting rid of the stupid and dangerous idea (khm, request) that the name on the ticket is the one of the person travelling?

And yet no mention of the interminable announcements in three languages e.g. "you will be pleased to read about our bar buffet"....NO I WON'T!

My boss is one of the charming execs with too-loud conversation about streamlining, blue sky thinking and 'apples to apples' comparisons. But in a Belgian accent. Be grateful you merely have to share a train with him, and not rely on him for a living, such as yours truly...

Cheaper tea at Gare du Midi. That cafe next to Pierre Marcolini charges 2.50Euro for a very small cup of tea - and you have to ask for fresh milk as they only have uht on the counter.

Ha ha Alice. I used to have one of those. The worst was when I had to travel with him, in a permanent British puddle of embarrassment. I once had a full body spasm on the Thalys as a result and threw my blackberry into a total stranger's handbag. Quality.

I like the buffet staff, The Lobby, so I forgive them their multi-lingual bollox and rubbish beverages.

LCM - My friend Helen suggested that if she and I were to run the Eurostar, we should introduce gags for the middle managers. Branded gags, obviously, with our corporate logo on.

#9.
Change the seat covers, will ya? It's been twenty years since the tunnel was dug and seventeen since the first services ran. When I was seventeen there was no way I could fit into my babygrows, and it was not a look I wanted after seventeen years anyway. So. Change it.

"London Underground can do it, Victoria line can do it, so you can do it too Eurostar..."


btw, I mentioned your post on my blog because it struck such a nice chord you were practically singing. In exasperation, of course.

Yes, the Eurostar is generally brilliant, and vastly better than flying (especially if you have to go via CDG which is hell on earth).

I agree about the statue - I often stop by the Betjeman Bar for my first proper beer on my way back from Paris and am amazed by the number of clueless people taking a. phoo of it. Replace it with a trampoline or a climbing frame or something fun.

And I especially agree about the middle managers who want to handle people's bottoms (must be what they mean when they want to "touch base with you" , no?). Once, on a freebie in 1st class, I had to escape to the buffet car in 2nd - so much more cheerful.

Your post has given me a wonderful sense of anticipation because my Eurostar trip to Bruxelles and it weirdness is only five days away. the service is pretty good IMO. I'm on a free Leisure Select return courtesy of a delay on my previous trip.
May be its because I'm male (sorry) but I didn't realise knowing when to open the train door caused a problem to anyone.

may be useful for all, helpful article once and pardon me permission to share also here Obat jantung bengkak terampuh

Thank You for sharing your article, This is an interesting & informative blog. It is very useful for the developer like me. Kindly keep blogging. Besides that Wisen has established as Best Corporate Training in Chennai .

This post gives me detailed information about theechnology. corporate training companies in india

Thanks for the very useful information, If you do not know then we will share the article. Please read because this is very important for us all.

Thank you for this very useful health article

Thank you for this very useful health article

ways to register an online account. So, continue reading as it's Official Page Currently, select the savings account type, enter your day of birth day, SSN, as well as e-mail address.

Never been on the Eurostar, after reading your experience I would love to take a ride. official website

Your article had provided me with another point of view on this topic. I had absolutely no concept that things can possibly work on this manner as well. Thank you for sharing your opinion