Stuff what I done to amuse my offspring this summer

1. Dressed up in an outsized canvas sumo suit and "fought" their father (a minute of self-conscious, feeble 'amuser les enfants' shoving, then we both got a taste for it and started really laying into each other).

2. Had my hand hammered by a plastic mallet by a man in a woad tunic in a place called Neder Over Hembeek.

3. Fought a Dutch grandmother with a polystyrene sword. On one leg. Lost. Still in Neder Over Hembeek.

4. Driven to an obscure corner of Vlaams Brabant, put on a swimming costume (otherwise known as The Ultimate Sacrifice) and sat in a tepid soup of human effluent, patrolled by uniformed security guards WITH DOGS.

5. Been to 5 Science Museums: London, Bristol, Mechelen, Paris and That Shitty One In Bourse Metro Station With The Strobe Lit Mannekin Pis. Seen enough optical illusions to induce a year's worth of migraines.

6. Played 29 games of dominoes, 17 Cluedo, and two of some shitty German thing called Suleika that none of us understand, featuring complex Germanic rules, tiny carpets and a missing dice.

7. Played 35 games of Animal, Vegetable, Mineral, the answer to 34 of which was "champignon atomique" (mushroom cloud).

8. But only played one round of terrible game based on a manga invented by Lashes, as it was so extravagantly boring, none of us could be arsed.

10. Seen The Smurfs. In 3D. As if two dimensions weren't enough.

13. Oh god, I nearly forgot. Went to the Museum of All Despair (And Some Old Comics) and sat in the BD "Reading Room" repository of all the teen angst and sexual frustration OF THE WORLD. Or at least of Belgium. Lashes enjoyed this very much. Fingers was faintly appalled and kept flitting over to me to whisper loudly and indiscreetly "C'est nul, quand est-ce qu'on peut partir?" (It's rubbish, when can we leave).

14. Bought an intricate, expensive mountain of school supplies, including the specified brand of set square, because one must accept no cheap generic imitations of a flimsy plastic triangle, for lo, that way anarchy lies.

15. Encountered sand. Repeatedly (also known as The Other Ultimate Sacrifice. I have massive sensory issues with sand).

And now, we are in Le Touquet, in the very north of France, on a short break. There is a very great deal of sand. We are staying in a Novotel on the beach that resembles a decaying Soviet bunker intended for a small city in the Urals. The sky is the colour of lead and bruises and the wind is sufficient to cause small dogs (of which there are a great number) to take flight. I have seen the following on the seafront: 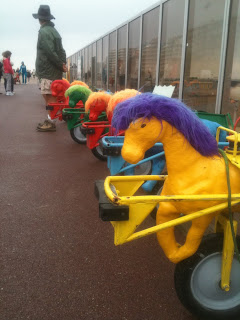 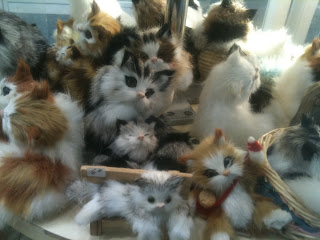 Gangs of errant children roam feral through the hotel armed with entrenching tools and packets of Carambars, as their parents hide in dark corners of the bar, furtively lining up garish cocktails (yesterday's "Bond Martini" featured watermelon liqueur and a pink plastic stirring stick thing). Everyone fears a three year old called "Adrien" who has the balanced, peace loving personality of Attila the Hun, and very sharp nails. The only thing that can rival him for savagery is the seagulls, larger than ponies, who whizz past every few minutes, fangs to the wind, to see if they can make off with an infant, or a jumbo moules-frites. Every few hours the dog goes quietly into a corner to vomit a pile of sand it has ingested through sheer stupidity. We are mainly staring at the sea from a respectful distance and eating chips. Oh, I made an intricate shell fish today. The children ran the gamut of reactions from lukewarm, to indifferent, to embarassed for me, in the hour it took to construct. 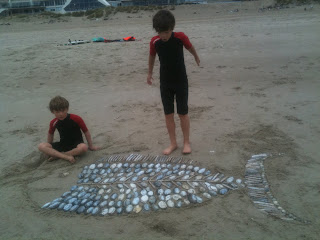 It's great, actually (the holiday, not the fish. Obviously). I could pretend it's terrible, but that would be a big fat lie. However, I think I - and they - will be ready for school to start again in 8 days (counting? No, definitely not counting). I might even be ready for a "Bond Martini".
Posted by Waffle at 18:14

My, it looks bleak there. I went to Le Touquet on a schooltrip when I was 12. I remember nothing except making my teachers ask the waiters in the hotel whether the food they brought us contained horse and feeling very tense about asking for stamp in a post office. I dropped French on my return and took up German. Where I have never been and which I have never used. I regularly visit France now and my French is pants. Could I blame it all on Le Touquet?

That is certainly a Seriously Awesome fish. I want you to come design mosaics for me!

This is the most lovely thing I've seen for a while!
Your fabulous fish reminds me of "The Rainbow Fish" (he of the shiny scales and generous nature, whose story is told in a preschooler's picture book), but even more gorgeous because of the way you've used the natural materials so sympathetically.
Hairyfarmerfamily is right - this could be your new talent-expressed-that-earns-money!
Heather in NZ

Love the fish, and you should get a medal!
And about #11: brought back painful memories of the days when older son would regale us for hours/days/months on end with descriptions of the qualities of each individual Pokemon, its characteristics, and various incarnations that each one would evolve into as it gained power. So difficult trying to maintain an interested facial expression and remember to insert occasional comments to prove you're listening...

You are a saint frankly. All those "attractions" in a concentrated time period? Bravo!

Oh smurfing hell it was. I got the time wrong so we had to spend three hours hanging around waiting for it to start. They left Gargomel in New York, do you think that means a sequel is due?

And I hate sand too. I have a chair and I sit in it, occasionally visiting the sea. That is me on the beach.

Love the fish! I agree that putting on a bathing suit is the ultimate sacrifice.

This guy wants a Bond Martini, or he just mistakenly heard someone say, "If Southern California is good enough for Vita Sackville-West, it's good enough for you" or something. Mysterious, he's in James Dean territory, legendary, though people crash Porsches in my neighborhood every day.

What do those foreigners who invented them call the Smurfs again? Les Schtroumphs or something like that?

My vacation is next week and I think we're getting Hurricane Irene then. And I don't care! Earthquake? Bring it. I plan to go to boring museums, buy useless "antiques," drink lots of wine, eat lots of seafood, and look at the ocean. Your holiday sounds divine--and long. When are you girls getting Facegoop back up--I've been buying random overpriced eye shadow with no guidance. None!

Yes. Very nice fish. I commend you! We never did anything remotely as entertaining as what you've done. Hang on...Only 8 more days!

I remember being in the back of a car with you going back to st Johns street. Your mother was up front. Don't know who was driving or where we had been. Someone suggested we play Animal, Vegetable, Mineral and you piped up, 'but we're not allowed to use abstract, alright?'. I was stunned by your intelligence. you must have been seven I guess.

Bless you, Eejit. I fear that there was actually my intellectual peak. I see the disappointment in my father's eyes constantly, when he remembers what a brilliant 7 year old I was, and looks at the pathetic creature I have become...

I know there will be many difficulties and challenges but I am determined to do it. If it does not succeed then it will be a lesson for me as well
catmario4.com