Belgium is not really on best behaviour this week. We are on our fourth day of unrelenting rain, the dog is sporting a fine layer of mildew, as are the children, who are intent on finding new and exciting ways to kill/cause irrevocable psychological damage to each other. We have played 14,000 games of Cluedo, which they SUCK at, and watched too much TV, Fingers has perfected his flouncy teenage "Oh nooooooon, pas ça" at any suggested activity and I have had no time to do anything except sweep dust into small piles on the floor and shout, occasionally. By the time evening crawls around, I am only fit for watching gloomy Danish drama in bed. I am slightly worried that my sleep routines are now entirely dependent on the soothing sounds and muted palette of The Killing, which usually lulls me into a deep state of somnolence around the 45 minute mark. God knows how I will cope when I finish watching it. Anyway, I would like to do blogging, and, you know, earning MONEY and shit, but I have no childcare organised for the next two weeks, no new work coming in, and no plans, so please pray for me, hard. Or babysit. Or give me a job. Or send me a cake.

In the brief hour of free time I have whilst the children are at the foul swimming pool, hopefully exorcising some of their vast reserves of natural aggression, I think what we really need is a heart warming tale of triumph over adversity, with cute (if neurotic) animals. A story like Weepette's (SPOILER) cinematic triumph against overwhelming odds and a dastardly professional Afghan in the Cherington show. Sadly, I can't give us one. I can't tell you that story yet, because I don't have the pictures, and without the pictures, it is as nothing. Nor do I have the photos of the woodlouse racing, the hamster roulette, or my attempt to secrete a selection of owls in my handbag. Soon, I promise.

In the meantime, I can at least tell you about the vegetable animals. As you may know, I have previous with vegetable sculpture myself. Before this blog collapsed into, well, whatever it is now, we used to have vegetable sculpting competitions and everything. Who can forget the Angler Fish? Or the grape bee? Ah, happy, innocent days.

Keen to recapture the sense of unalloyed achievement that comes from ineptly hacking a vegetable around with a blunt knife for absolutely no valid reason, then adding 800,000 pointless and ineffectual cocktail sticks, I was insistent all the children entered the veg animal competition at the fête. They were relatively willing to humour me, possibly to escape further chores on the grandparental work camp. By this stage in the week, they had already experienced the 18 hour power cut, which had gone some way to breaking their spirit, and I had successfully compounded their gloom by droning on about my own childhood holidays, sitting in a hollowed out lightning blasted tree in a cagoule with a slice of Lyles Ginger Cake and seven books by Josephine Pullein Thompson. All in all, they were ready for some low-tech entertainment.

We selected vegetables and sat down at the table outside in only a light drizzle to sculpt. My father hovered, ominously, commenting on the profligacy of our unnecessary marrow sacrifice. I was, of course, forced to reign in my control freakery.

If I had had my way, I would have been intricately carving dung beetle antennae at midnight, but thankfully, no one would let me have my way. Instead, they came up with these:


Lashes went with this artichoke "tortoise" (?): 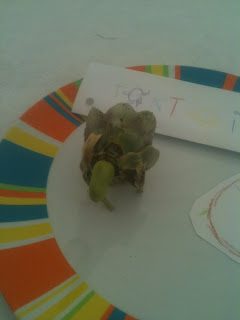 It caused me considerable angst in the leg department in transport, and required in situ corrective surgery. You can see that one of its forepaws is listing dangerously in this picture, but it managed to limp through the judging intact.

My niece did a sheep: 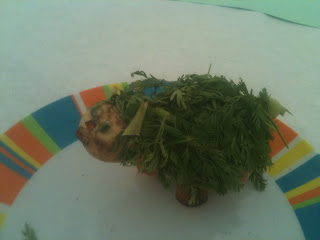 I liked the sheep a lot. The carrot leaf wool pleases me greatly.

Fingers, I must relate with sadness but very little surprise, was profoundly indifferent to the whole activity, but finally deigned to make this "hedgehog": 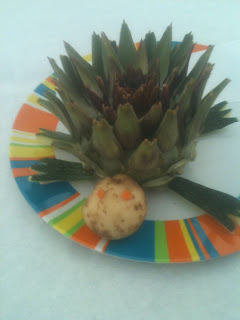 It would have just been a featureless artichoke/potato combo if he had had his way, but I put my foot down and insisted on legs, at least. He submitted with the resigned demeanour of one who is forced to humour a mad woman. He's getting very good at that.

Finally, whilst I was upstairs sacrificing a goat to British Telecom, my nephew was executing his audaciously brilliant "Rattlesnake and sea urchin" combo:

After a tense overnight stay in the fridge (tense for me, not the vegetables), we transported our, sorry, their work product to the show ground, and after some last minute UHU action, we left, to wait out the judges' verdict eating "Mr Whippet" ice creams (Lashes really believes this is what they are called) and humiliating the dog in new and exciting ways.

When we were finally allowed back into the produce tent, where to our delight and amazement the rattlesnake/sea urchin combo had triumphed. 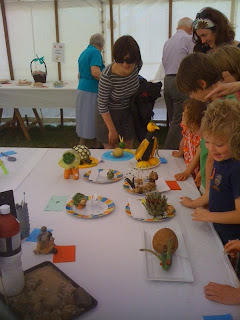 Look, here we are, marvelling. I was too over-excited at this point to take a decent, photo, but if you look closely, you can see it has a red card thingy, which I believe entitled my nephew to the princely sum of ONE POUND. Possibly one pound fifty.

We won! Sorry. He won. We celebrated with pint glasses of Pimms, and tat from the car boot sale and more Mr Whippets all round.

Here are my children staring into a barrel. They were discussing whether they could transport the sheep carcass home in it, but sadly, the car was still convalescing from its catastrophic gasket injury in Woodstock, so it was impossible, which was very sad. Ahem. 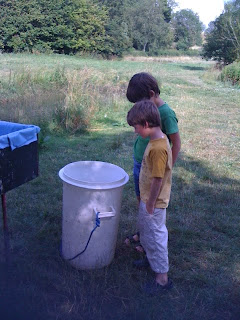 When I was young this, in and of itself, would have constituted a whole day's holiday activity (etc etc etc, continue until whole audience unconscious)...
Posted by Waffle at 12:16

I predict your youngsters will regale their grandchildren with tales of the dead sheep...
I base this on our daughter's first experience of American Independence Day celebrations where the very flat carcass of a possum trumped an afternoon circus, picnic in the park, ice cream and the "usual" over the top fireworks display (which she SLEPT through!).
Twenty years later and she still remembers that poor possum!

I would so babysit for you (and god knows should be of some service to you), though my latest babysitting trick is syringe vials of morphine (you decide). Not sure when I'll be back, as hospice staff keeps saying only Mr. Propre knows. I resist the temptation to ask them to verify this.
Plastic owl in the backyard has eyes that have gone all hazy. Whatever rodents are back there must be laughing hysterically at his complete lack of ability to spot them, with this glaucoma shit all over his eyeballs.

I could probably send you a cake all the way from here and it would even get to you in one piece; one solid lump probably.
So understand about no work on the horizan. When I get it it makes be absolutely furious and resentful and when I don't... more of the same.

It all feels very Molesworthian Swallows and Amazons. If such a combinations were even possible.

So very sad that you could not bring a sheep's carcass home as a souvenir. Think of the possibilities in home decor!

I cannot send you cake, but I will let you look at this. http://www.flickr.com/photos/ohbara/6046401283/in/photostream

AND: my word verification was 'phesses'. That is what wannabe-gangster kids in rich suburbs of Paris call their fesses, right? This time it is the unsatisfactory 'ristst', which I'm pretty sure is a thin rice gruel sweetened with honey served in Ukranian labor camps of the Soviet era.

Madame Waffle, you are incorrigible. Your content is absulutely not safe for work. I was sneaking a quick read ogf this on my newly acquired smart phone and trying unsuccessfully to suppress chortles of mirth. WifeBoss thought I was choking on something and looked at me in a concerned way until she realised what I was doing instead of earning money for our great enterprise, when the looks turned into something a basilisk would be proud of.