I have had a minor revelation today. The reason I spend the holidays in a state of chest constricting anxiety and high alert is because of having been, to all intents and purposes, an only child. I do have siblings, but the age gap between us is so great we never had the opportunity to spend long, absorbed months honing new forms of psychological torture for each other, or even experienced the simple pleasure of thwacking one another over the head with coal shovels. It's sad, really.

Thus, the current sounds of riotous, what I can only assume is "fun" from downstairs just alarm me. To my untrained only child ears, sibling interaction always sounds dangerous, messy, and liable to end in tears. Possibly tears of blood. Supervising sibling interaction seems to me very like being a UN peacekeeper in a highly volatile, complex regional conflict: you don't know when to intervene and when to keep your distance, you don't know, and can't possibly guess at the rights and wrongs, or origins, of any given flare up, and whatever you do decide to do will be greeted with universal fury.

I imagine that if you were raised with siblings of a similar age to your own, as opposed to a coven of highly evolved hippy-slash-academics and a stack of age inappropriate reading matter, you would view these kinds of shenanigans with a sort of benevolent indifference. I do not know, I can only speculate. I would like to feel benevolent indifference. Mainly I feel flooded with cortisol. I can't regret my tranquil childhood in the tweedy embrace of Dorothy L Sayers and P.D. James, but it's doing me no good right now. The basic problem is that I would like them all to be reading and occasionally playing clock patience, and they would like to be sitting on each other's heads and calling each other "minus" with occasional breaks to kill some zombies.

Aaanyway. Today's 'deflect the children from killing each other' activities kicked off with a trip to Belgium's most inauspiciously sited attraction. Can I even say that? I am suddenly lacking confidence in this broad statement, there may be others I am still to discover. It's a science, erm, exhibit, located in the bowels - actually it smells more like the bladder - of one of Brussels's less salubrious Metro stations, Bourse. Bourse metro, where I have shared a platform with so many disturbed individuals, stalkery pervs and stag parties over the years that I now enter it with a sort of shiver of dread. One particular dickhead followed me all the way home from there, and on another occasion I got within a nanosecond of punching someone. All in all, the perfect place for a child friendly science activity centre! Another Belgian civic planning triumph.

Look, here is an extremely wobbly photograph of the entrance. Charming, no? Not at all like a still from a disaster movie set in a post-apocalyptic ex-Soviet state. 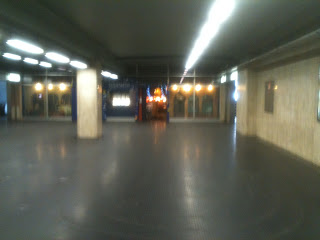 I can't actually be too mean about it. It looks like the exhibits were made by an occupational therapy group in the mid '80s, but (a) the girl working there was utterly charming and kind and did a ridiculous mirror image routine where she "made a stick come out of her nose" purely for my children's entertainment; (b) it was almost empty which was a mercy (if not entirely a surprise); and (c) my children, children of the Nintendo age, children who have been to four high tech, glossy, amazing science parks in the last 2 months, were MAD FOR IT. I was not allowed to sit down for a minute, as they marched me from exhibit to charmingly decrepit exhibit, exclaiming with touching enthusiasm at the shonky optical illusions.


The absolute highlight for me was this replica Manneken Pis in a shower cubicle. Once every three minutes, you could add 5 seconds of strobe lighting to the tableau. 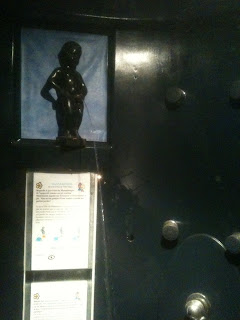 Epic. I am sorry this is so dark. That is because it is very dark in there, what with it being, oh yes, in a windowless bunker in a metro station.

I think that's enough excitement for the day. I'll save our (return! Thereby breaching my solemn promise to my offspring never to make them go back there) trip to the Centre Belge de la Bande Dessinée for another time. Soon you'll be begging me to go back to pictures of shonky vegetable sculpture.
Posted by Waffle at 21:27

This was hilarious! So sorry to laugh at your plight, but as a 'virtual only child' with two sons, I completely understand your bewilderment with inter-sibling relations. We also had a trip last weekend to a museum that was just about as highbrow as the one you describe, which my kids loved. Great way to start my morning!

Ahh, I think some of the anxiety is not due to siblings per se but to boys. As one of two girls we tended to retreat into our own corners with stacks of reading emerging only to be dragged round a monument/place of worship/museum by the parents or to argue over Monopoly. Warfare was mostly passive aggressive and not noisy. No injuries other than mental ones either.

I decided to tackle the holiday hell by importing extra children into the mix. a whole different kind of nightmare.

That metro looks like a place where your sons' zombie fighting experience could come in handy!

I only knew one way to deal with my children's sibling rivalry - be so mean to them when they quarrelled that they united in hating me. You and Betty both make good points - I had one much older sister and then had two children close together, boy and girl. I was afraid to let them fight, I thought one might kill the other.

My son is an only child and he plays away quite the thing on his own. Sometimes striking matches in a cupboard, but let's gloss over that.

When he has friends round, I sit quaking in the same cupboard, nursing a half bottle of whisky and wishing the little fuckers would go home.

But apparently this is how little boys play - noisily, usually with some sort of Lego violence and if the bookshelf is pulled off, including the 100 year old plaster, you just have to smile and pretend like you're COOL with the whole thing.

Inside you are screaming for a stun gun of your very own.

That really is a grim looking exhibition. And I live in Scotland.

Hmm, that is really interesting. I have two younger brothers, but we are all four years apart from one another, which is pretty significant when children are young. I do spend a lot of time even now (children girl aged 2 and boy aged 4) with my heart in my throat about who is going to get hurt next--there are so many ways, apparently.

And yes, I do think that Betty is right and we can attribute some of this unfamiliar violence to having two boys in particular. My brothers, if I recall correctly, were pretty mellow for boys, but it never ceases to amaze me what sort of things my son will do, just because ... well, why not?

I love your sordid ?science? center. Why do you think it enthralled them so? As a relatively new parent I am gaining new appreciation for what makes a good or bad museum exhibit. The worst are the ones that are all reading, or looking at something in a glass box. If they can't touch it and play with it, forget it.

There's nothing I can say about siblings wars.I was raised an only child and was always very into my own world playing and stuff not even wanting any cousins or friends coming to play much to my mum astonishment and I do feel very lost when watching my monsters fight over a toy,a board game (which doubtless ends up in one of the two throwing everything on the floor) or...even vegs and fruits ! (had them fighting over how many strawberries they had etc. etc. very exhausting!)
There are times when they can be very rude to each other and then when one of them is ill or else,the other can really be there for a kind word,a nice gesture but it's always very unpredictable. What is less unpredictable I'm afraid is my son endless love for that terrible place you mentioned.tbc

He just loves this place so much,labelled it "coolest museum ever" (??) and he even wants his birthday there!
('d rather kiss a cold fish)

I for one think it's too dark a place,not very welcoming and experiments are somewhat old.
only plus point : staff is friendly (had a chat with the manager and he was quite nice) but my youngest still have nightmares about that woman and her stick and she sweared she will never go there again and so do I. Problem is since they changed busses stops location,we have to walk near this smelly entrance and see their ad ("look mum,loook") . ever tried children museum in ixelles ? that's way nicer !

What we called the "dinosaur museum" (is it the Museum of Science & Nature?) in Brussels used to be a real "life saver". Only daughter and twin girlfriends used to love to locate the live saucer-sized spiders hiding in individual glass cases -- and then emit ear-splitting shrieks. (Amazingly, we were never thrown out of the museum for this...)

as mother of 3 boys who spends her life with head in hands despairing at their antics i so understand-i think now they re normal and its me with quaker upbringing and much older sibs (12 yrs plus) whose not ?

I'm one of three children and we definitely engaged in childish violence, but after I married into my husband's family--he is the 6th of SEVEN children, my childhood seemed almost like being buried alive by comparison. All of his siblings had between 4-6 children (we're Catholic) and they're so wild they're practically feral and my own kids follow suit. The day of my father-in-law's funeral, I had to jump in the pool fully clothed to rescue my son, AND one of my nephews broke my husband's 10th rib during a frisbee game. And this is when the family was grieving. Can you imagine what they're like at weddings?

Patience - This comment made me laugh and laugh. Bleakly, but laugh all the same.

Marie - It must be a boy thing, mustn't it? They don't like the new incarnation of the Musée des Enfants, though Rouge used to be a failsafe. Another child entertaining door closes, dammit.

Rocket - I wondered about the Quaker upbringing thing too. I think we have a lower tolerance of ENDLESS NOISE.

waffle-re endless noise -that's so true -my father is SO quiet AND can t stand noise -its suddenly all makes sense....

i think yes, it must be boys who pay special attention to violence; so far we have escaped lightly here with competitive ggg triplets - only a knocked out tooth, a few busted heads and some suffocating. the ggg stab each other with words. words and looks, and then they tend to smash the house up. i am raising good wife types.

Take every chance you get in life, because some things only happen once
cara menghilangkan benjolan menyerupai bisul di bibir vagina