Hello. Speak quietly please, I am struggling with dreadful insomnia and the insistent sensation that I have been swimming in, and binge-drinking, embalming fluid. My suspicion that my gin was switched with formaldehyde at Brussels' premier (only) (unless you count Homo Erectus, and really, who would) transvestite cabaret bar last week is apparently inaccurate, however, according to the mighty forces of Science, or at least Mr Cookblog. Apparently "our bodies produce aldehydes as part of metabolising alcohol", so it is my own fault I feel like a long dead thing.
I am currently in London, international city of glamour and so on. This is demonstrated by the following facts:
1. Shopping
I have purchased two Marks & Spencer minimiser bras for the modish sum of 14 of your British pounds. I am very delighted with my newly crushed chest, it is everything I hoped for and more. With the sterling elastic assistance of my new bras, I can probably fit into almost 20% of my wardrobe, progress indeed. I also went to Londis for deodorant and Maplins for an adaptor, but then I had to stop before I became overwhelmed with retail opportunity excitement. The latter was an excellent retail experience for a Belgian resident, since it:
(a) took 30 seconds; and
(b) was very cheap; and
(c) took place on a Sunday.
London 1, Brussels 0, but Brussels doesn't care because it has a lift museum, and popular music in the metro.
2. Romance
An elderly Irish gentleman smelling strongly of Tenants Extra chatted me up on the 31 bus. Actually, he offered me his seat but I am fairly sure he did not actually think I was pregnant.
3. Livestock
There has, apparently, been an escapee peacock down my father's street in recent weeks. "The neighbour's dog barked at it, so it flew onto Ivo's roof (ed's note: if you live in Notting Hill, there is a strong likelihood that one or more of your neighbours will be called Ivo) and sat there".
I caught a tiny frog in Beckenham which tried to jump into my cup of tea.
The CFO, who is also in London just called me. "I am in an office in Sussex Place", he said. "And I am watching a fox in the corner of the room scratch its ear. There is another one sleeping next to it".
Which was odd.
4. Social events
I went to 52 Betty's book launch last night, in posh sex emporium Coco de Mer. There is nothing like nervously sipping pink Cava and waiting for someone you recognise to arrive in a forest of high end vibrators and jade dildos to make you feel like a bit of a tool, but thankfully the Harridan arrived and I attached myself to her side, like her mute, black, parrot. We made an excellent double act, I think: her telling everyone whose paths we crossed that her "stroke face" was due to her root canal work rather than a stroke; me getting people's names wrong and knocking over flogging paddles and god knows what else at every turn.
Betty's book, The 52 Seductions, based on her former blog of the same name, is about Betty and her husband Herbert's year long mission to revive their sex life by seducing each other every week. It is not a how-to manual, and it's not self-congratulatory or likely to make you feel inadequate. It's warm, often thoughtful and frequently very funny. Actually, it's at least as much about love and vulnerability and the meandering course of long term relationships as sex. It feels a very brave book, actually. I would no more be able to speak of such things than I would be able to do particle physics, so I am particularly awed by her candour.
Most importantly, it was an excellent do, with mini sandwiches shaped like pants and pink Cava. I took a picture of the pants-wiches, reasoning, why be classy when you can make an arse of yourself. 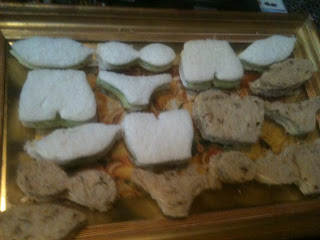 Speaking of arse, there were also biscuits with chapter headings on them, very similar to my own arse biscuits, but larger. 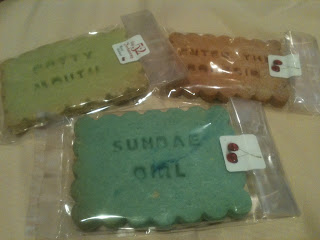 Now I must return to Brussels, but not before I have walked around Marks & Spencer in a fugue state.

*The title of this post comes from today's chat with M, which also covered our respective attitudes to various geometric shapes.
"So, you're saying a disc is ok, but a circle is bad?"
"I don't know. Am I? I have nomenclature problems. I am saying bagel bad, biscuit good".
"Noted. Cheese: ok, elastic band: not ok. How do you feel about squares?"
"I associate them with caramel shortbread, which is positive".
"How do we feel about half circles? Like, a rainbow? Or half a reblochon?"
"I am against them".
This did not even arise in the context of Google Plus, it was just common or garden stupidity. How do you feel about circles?
Posted by Waffle at 12:36

Oh I empathise! A similar thing happened to me just last week. I too got offered a seat at the bus stop by a young woman. I did happen to be shoving a Double Decker in my mouth at the time but I did and still dont look pregnant.
I have repeated this alongside "she was just being friendly" til I stop panicking and continue to resist all-out reactionary crash dieting.

Honestly can all you nice old men and young women on buses take into account the repercussions of offering non-pregnant, non-disabled women your seats?! You're not being kind - thank you muchly.

This is one of the joys of getting on a bit and having grey hair - people give up their seat for you and you are asked at the supermarket check out if you would like someone to pack your shopping - yes please.

I love and loathe circles in equal measures. Too many "reasons" to go into here. And triangles. Hello? What are they about? Pointy, harmonious when they feel like it, fallover-y quite often - a little flaky, methinks.

Do you also do this thing where days of the week have a colour associated with them in your mind and so you like them more or less depending on the colour? As a child I went as far as associating some days to TWO colours, based on the typical meal of that day (mainly applied to Saturday really, which was and still is yellow and browny-pink based on it being poulet-frites day when we got back from school at lunchtime).
Yes, the human mind is a strange thing. Well, mine is, at any rate.

Glad you're enjoying London, its fauna and flora.

Soleils, did you know there's a name for that? It's synesthesia. I have a different form, had no idea it was a thing, love it though!

I like rounded edges -- possibly because the older I get, the more "rounded" I become. I'm calling it Rubenesque...(and then I inevitably catch a glimpse of those pasty-skinned, pin-headed women....)

Circles are all right, but rather unsubtle. I prefer the ellipse They are fine in Google+ though, where so far I have only two, family and blogfriends. I don't know of any actual friends who have an account.

I was 34 and not at all pregnant-looking when first offered a seat on the tube. People in London are just charming and courteous.

at the risk of adding a note of Euclidean precision to the proceedings, a bagel is a torus. As they are rumoured at some level to be the shape of the 4D universe, they are amongst the best shapes there are IMHO.

Circles are ok. I prefer an oval less showy.

Where were all these seat giving up persons the 3 times I was massively pregnant? I could count the no of times I got a seat On one hand.

We was AWESOME. I especially liked the way we were all sweating profusely. OH, and how I blocked Betty's husband Herbert in the toilet hallway and FORCED him to look at my face until he agreed with me that, yes, it was a bit wonky. And your bosoms were marvellous. jealous, I am.

Respect for doing your shopping in Maplin. You have gone up (even more) in my estimation. All the Maplins I have ever been in are populated by pimply nerdy youths and overweight middle-aged men who have never heard of Arrid Extra Dry (or indeed dental hygiene).

And me, of course.

But but but, FC, the men of Maplin treated me like a PRINCESS. I might go there more often for the ego boost.

Lizard - Can we please have a diagram of your bread-based pedantry?

Rhia/Betty M/Native - I get offered seats more than I like to admit. I tell myself it is due to my penchant for dresses that look like binbags-cum-maternity smocks. Or Z's courtesy theory, possibly. Straws. Clutching.

Poor H was obviously too traumatised by The Harridan's stroke face to tell me that - he also neglected to tell me that he'd been adding a little drawing of a penis to the books he signed. I was not expecting him to freestyle. I am, however, now refusing to eat any sandwiches that are not cut into the shape of undergarments. Lovely to see you x

There you go. Delicious with cream cheese and bose-einstein condensate.

Since our son was born (nigh on 11 years ago) Tartarus and I no longer go to bed like Brad and Angelina; we're more Eric and Ernie now. Minus the pipe (at the moment).

Lucky you meeting up with The Harridan - she's another one of my favourite blogs.

I need to know - what on earth was the CEO doing in a room with two foxes. I'm presuming he's talking Reynard rather than two babes from Jersey Shores?

re number 3, anecdotal reports tell me areas of northern California are beset with *wild* peacocks whom, you know, screech at all hours of the night. Disclaimer: I do not live in northern California or anywhere near the godforsaken bankrupt place.
- Brenda

I did a photo collection of circles a while back. I love circles. Circles are divine...
http://bbonthebrink.blogspot.com/2011/01/circles.html

Does your father live towards the Bayswater end of Notting Hill? When I thought I'd been woken up by peacocks last week I thought I'd better lay off the wine for bit, but perhaps it was the escapees.