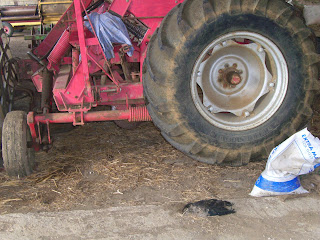 I have a pressing question on the phone hacking scandal, and it is this.
What the fuck are the Chipping Norton Set doing in Chipping Norton?
I mean, have you been to Chipping Norton? Because I have. I got my first and only speeding ticket to date trying to leave Chipping Norton, actually, and that's no coincidence. Ok, it's very pretty. The Cotswolds is, generally; I must concede that it is exceedingly attractive If You Like That Kind of Thing. If, however, the tunnel from Barbican tube to Silk Street is your idea of beauty, you may, like me, struggle. I suppose the fact that there's a Londis AND Co-op helps (actually, scrupulous fairness requires me to disclose that there's a Sainsburys, which I will admit is the height of Cotswold sophistication. I often find myself weeping tears of gratitude when I get as far as the rubbish Tesco in Broadway). And yes, there is a nice hotel and two delis. But the discovery that Chipping Norton is a nexus of News International evil baffles me. Do they perhaps get up to such depraved, horrible things because there is arse all else to do?
Even before the current brouhaha, I kept hearing about the London-on-the-Wold side of the Cotswolds, how it's lousy with celebrities - Liz Hurley Kate Moss, Damian Hirst, Kate Winslet.. And other people I have just looked up on this handy list. Well. I have never spotted ANY of them. Not even at Brailes Agricultural show, where they have a live pensioner fruit machine (this, magnificently, is three old people sitting in a row with a basket of fruit each, no word of a lie, I promise this is true) AND ferret roulette, so I am deeply sceptical. What on earth could they possibly find to do which would beat that?
The reason I know so much ("so much" = virtually nothing) about the Cotswolds is that my father, the Bearded King of Science lives there, has done for years. He used to live in Blockley, which was supposed to boast a more reasonable selection of notables: Alan Rusbridger, Will Hutton, Joanna Trollope and The Fat One From Lovejoy. Not quite premier league, but you know, enough for a little frisson. We never saw any of them. My stepmother did once claim to have seen Sting in the pub, but we didn't believe her. Our idea of Cotswold celebrities remained the homicidal goat at the Cotswold Farm Park (pictured here, that man in the flat cap doesn't realise he's dicing with death).
Now he has moved to a remoter corner of the Cotswold firmament and I have yet to spot so much as an extra in Hollyoaks. I am not saying there are not compensatory delights. Regular readers may remember the dizzying array of activities on offer for small children: the opportunities for fishing dead mice out of storm drains, chasing spiders the size of ponies out of the shower, the cheery parlour games of 'guess the cause of death of the small mammal', the hours of fun dicing with death or amputation in The Tetanus Adventure Playground TM (barn full of rusting agricultural machinery). Well behaved children may be offered the chance to go down to the stream and poke a decomposing fox corpse with a stick. If I am very very good myself, I may get an hour's free pass to go to the nearest market town while my children roam free range near the septic tank, whining about the absence of digital tv. Until recently it had largely escaped the gentrification of most of the Cotswolds and a good day out involved wandering round the hardware store, then buying a lardy cake, that tasty traditional Oxfordshire blend of diabetes, heart disease and raisins. Sometimes, if were feeling lucky, we would beg the depressive café-gallery owner to turn his coffee machine on, though this rarely ended well. Now there's a proper hotel and everything, with reading material other than Cotswold Life. Maybe next time I go I'll see Lily Allen or something? I live in hope. I did once go to Daylesford, but it was terrifying, filled with women in Tod's loafers assaulting each other for the last jar of plum compôte. I'd rather take my chances with the horse sized arachnids and the badger carcasses.
I do not understand The Country, this has been long established. But this whole Chipping Norton set thing has piqued my curiosity. What do they do? Presumably they just go to one another's houses for cocktails all the time, and none of them have to deal with the queue in Londis or negotiate the challenging journey to the Costwold Motoring Museum to see Brum. I am quite certain none of them have ever been to the "Fundays Play Barn" in Bourton on the Water (it is hard to type those words, the scars are still fresh). But I am going back there in the first week of August (children and dog have tetanus boosters scheduled) and I will investigate. Maybe Brailes will be throbbing with paparazzi? Goodness, I am almost looking forward to it.
Posted by Waffle at 11:16

I now can't get the pensioner fruit machine out of my head. What on earth happens to them...?

I live in Dorset and our village vicar does his own solo fruit machine at the summer fete. It is marvellous.

Ha, thank you, you've brought back many a fond childhood memory for me!

You're talking to the twice-winner of the Brailes Show childrens' entries cup, for miniature gardens and decorated paper plates and the like. *bows*

Back to the matter at hand - this is why Ocado was invented, so idyllic retreat-dwelling poshos don't have to interact with actual country folk at the local Londis.

Rachelolio I am in awe. IN. AWE. This is better than meeting a celebrity. I can't get enough of those gardens on trays. I LOVE them. Did you ever make a vegetable animal?

(as someone once said about Poland) It's not so much a country, as a state of mind.....

Gail: Well. You pay your 10p, or possibly more now and the pensioners each randomly select a piece of fruit from their basket. If they all select, say, an apple, then you have won. Voilà. Simple but brilliant.

Ferret roulette involves betting on which hole of a large box filled with numbered holes a ferret will emerge from.

Living, as we do, slightly west of Stratford upon Avon,I am not a million miles away from you. Holler if you have time for cake!

HFF: Oh god, yes. If I get an extended pass to leave the compound, I would absolutely love to come and visit...

(Word verification = 'dress'. This is spooky because I am naked.)

Live pensioner fruit machine and ferret roulette - we have both of those at the Dyke Neuk Show (yes, it's really called that). Maybe it is somehow "twinned" with the Brailes show? We also have a Most Disastrous Baking prize. Frankly, as anything I make would win hands down, it seems somehow unfair to enter.

We had the human fruit machine thing at our school fete a couple of weeks ago! I had never heard of it before but clearly they get everywhere. I don't really 'get' the Cotswolds - they're sort of pretty and everything, but there's a distint lack of castles or coastline. You're just looking at people's houses after all - although people who are richer than you, obviously.

I keep meaning to lure Katyboo here again for tea & cake if you want to make a party of it!

I think the odds of a win are better with the ferrets...

Chipping Norton always makes me think of some sort of overcooked beef bits on toast covered with a pasty white sauce....

Hmm...I will have to peruse my back issues of Living Etc. to see if I can solve the Rich Folk in the Cotswolds Mystery. I suspect they just need the square footage available there to fulfill their need for 2,000-square-foot master suites and kitchen islands the size of my bedroom. From what I understand of international real estate, you're not getting that in London.

You know what, I once made a genius vegetable dog out of a deformed carrot, a couple of cocktail sticks and some raisins. It did not win. I still hold a little bitterness in my heart...

All this comic countrified-tomfoolery makes me think that, quite simply, the English are mental. Vegetable animals? What. ever. could. they. be? It is all a bucolic wet dream, and I don't like it. Hugh Fernley-Whittingstall would like it though, I imagine, and he would sell you a lamb burger and lemonade for 20 quid.
Anyway. Once I saw Ruby Wax and Jason Donovan on THE SAME DAY in Notting Hill.

But...Ruby Wax is American and Jason Donovan is Australian.
(Is this why there's all that brouhaha over immigration?)

(American abroad still "free reading" too much crap at the local newsstand.)

I know! There's a freakishly good Chinese restaurant in Chippy. How, why, I have no idea, but it made working in the neighbourhood bearable.

You have no idea of what you are talking about. Chippy is a wonderful place to live