Things I Have Learnt During Infant Revision Time*

Revision continues, endless, frustrating, revealing more about my shortcomings of patience and pedagogy than actual facts. Facts thus far are thin on the ground, but I have gleaned the following:
1. Guignol was created in 1808 in the image of an Italian silk merchant living in Lyon called Signor Fabio. He has a friend called "Gnafron". This is plainly ridiculous. His friend should be a crocodile. I explained that all puppet shows should involve a crocodile, a string of sausages, a baby and endless hitting, but that was deemed unhelpful.
2. The Stegasaurus had plates that changed colour, which seems terribly evolved of it. When I asked Fingers if it was a carnivore or a herbivore, he hummed and hawed for a while and settled on "un peu des deux". Stegasaurus is cutting down on meat, actually. It's a health thing, and, you know, an ecology thing? He'll have the silken tofu tonight, thanks, because he had a burger this weekend and he still feels bloated? Stegasaurus is a neo-yuppy.
3. The silk workers of Lyon in the 18th century were called "canuts". Best to teach this to children whose first language is not English and who are under ten, I reckon.
4. Jullie zijn dik, which means "you (plural) are fat". Robald isn't big on political correctness.
5. No-one in this house knows what a non-equilateral pentagon is called in French.
6. I have all the patience of a wounded anaconda.
7. . I also know how to say glue stick in Dutch. No, I will not tell you. I am keeping it a secret.
*May not be factually accurate.
The winner of the father's day tat competition is.... 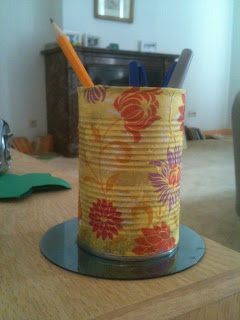 ... whoever first said "pencil tin".
(Talk amongst yourselves whilst I check who that was)
That was Alienne who wins .. something. The Mexican wrestling chocolates remain elusive, but I will use my imagination. Email me an address, Alienne.
Apart from that, wretched irrational terror remains the order of the day. I interviewed someone today who has accomplished completely jaw dropping things, who started a vast, extraordinary project with no financing and no experience, who took on an unimaginable level of debt, who everyone confidently predicted would fall flat on his face within six months. 19 years later, with a massively successful venture on his hands, he still invests €60 million every bloody year in it. It's mind-blowing.
"Weren't you terrified?" I asked. It fascinates me, this level of nerve. "How did you ever sleep?"
"I was blessed with not realising quite how deep in the shit I was in at the time" he said.
There is no lesson here. I was just impressed at that belief and confidence and sheer nerve. Now he gets to ride around on an elephant whenever he likes. One of his five elephants. At Lashes' behest, I asked him why he had shut the snake barn (with the free range snakes). He casually got out his phone and called the snake guy. "Philippe? Is the barn open again? There's a very sad lady here who wants to touch snakes. It is? You've put some snakes back in? They haven't escaped yet? Thanks. I'll let you get on".
Best interview ever. He's like a BILLIONAIRE FATHER CHRISTMAS. I was slightly disappointed he didn't thrust a baby owl into my hands as a parting gift, but still, best interview ever.
(This is a tiny video clip of a baby seal, or something, from the park website, but what I really love is that in the comments box it says "there's an armadillo on its back by the exit to the bat cave, is this normal?" which entirely mirrors my own conversation with them a few years ago about escapee capybaras wandering the picnic site, sneering at people's sandwiches.
"C'est normal?"
"Oui, c'est normal".
"Ah, ok alors" .
My interviewee told me escapees were common, the worst offenders being the maras who had developed a taste for his rose bushes. "Ces petits salopards". I am not surprised, I have seen them descending in marauding hoardes on the snack van. Pampas hares are surprisingly intimidating en masse. Try saying THAT in Dutch).
Posted by Waffle at 17:55

You have NO IDEA how much the revision answers remind me of school revision time. I Once had a child tell me that Viking boats were coated with tea to make them waterproof 'like when you do tea stains to make thing look old miss'. They were in fact coated with tar (or something resembling it). At least it was a three letter word I suppose.

All puppet shows should have a crocodile. And a few goats of available.

Your interview sounds ace! MAYBE YOU SHOULD ASK THE MAN FOR A JOB?

Quite correct, puppet shows should always involve a crocodile.

Robald can say any rude thing he wants, it's his duty. If he nips any information in the bud that he might have gotten in return...say, by having a 'normal' conversation where one keeps negative thoughts to oneself, well then, tough shit for Robald. He will have his idiocy and cultural cohesion to keep him warm at night. Look at him, no one else is going to do it, it's not like he can come up with lines like, "There's a very sad lady here who wants to touch snakes."

Waffle, you are making me laugh so much I can hardly breathe. I feel ready to face the world on the Trusty Trefusis bicycle. I shall pretend it's an elephant.

Oooh, so topical, a reference to Senator Jon Kyl (R)?

Brilliant! I will pretend to be heading for the elephant enclosure when doing the school run/drag tomorrow.

I am overcome by my astounding knowledge of child-made tat. I'd better get a lottery ticket this weekend too, just in case.

I can't help but give away the Dutch translation of glue stick: Pritt Stift (or more correctly and less brand prone: lijmstift)

And I'm a big fan of Stegasaurus, that guy was always way ahead of his time.

Lisa Marie - I seriously considered it. I still am actually.

Adrian - Since I entirely missed this story, I will have to put it down to genius zeitgeist reading and unconscious competence. Ahem.

Korakel - I HAVE BEEN LIED TO. The thing I learnt was something like 'plakstift'

Anon - It sounds awesome. I am heading to Vilvoorde to try it out on the unsuspecting local populace.

But has he got a flea-ridden hedgehog, a head-butting tortoise and a dog that refused to get his ball out of the water?

One nil to the Waffle household :-)

Must there be a word for a non-equililateral pentagon?

Hang on, there isn't a word for a non-equililateral pentagon in English, is there?

I can count in Dutch and I know the days of the week. Glue sticks had not been invented half a century ago when I had a Dutch au pair, so I have every excuse not to know their name. I still feel dim and ignorant, however.

Go for it, Alienne, you rock. As they say.