A cheery wake up on this, the Ascension bank holiday (I had to get theological advice as to what Ascenion is exactly. Apparently, it's a bit like the Rapture, Jesus shoots up to heaven, well worth getting a Thursday off. Why it's always a Thursday is any bugger's guess).
"Come down! Now!"
"Ugh. Why. It's early".
"JUST COME".
I drag myself out of bed, and come down. My head jerks back with shock as I see the horrible truth: the dog, looking faintly guilty, andd crawling, literally crawling, with fleas. I know who the culprit is: it is the CFO's godammned hedgehog which exercises a fatal pull over the dog whenever they encounter each other. He has stuck his head into the hedgehog's house to bark at it in weirdly compelled terror for two minutes and now look. It is fricking revolting. I recoil in horror.
"OH GOD OH GOD, SHIT SHIT SHIT"
"Maman! 20 centimes!" (they have a swearing fund now. They have worked out that they now have enough for a 3 scoop ice cream extravaganza with all our foul cursing).
"Well, look at him! Ewwwwww this is not good. Not good not good not good".
We start de-fleaing the dog. Fleas are persistent little bastards and to kill them, you need to basically explode them with your nail (gross enough? Even nicer at 7am, I can tell you). The children bloody love it. Lashes is actually laughing with joy.
"This is AMAZING" he says , delightedly popping another tiny corpse. "It's like a shoot 'em up game! But real!" (Disclaimer: he has never played a shoot 'em up game, at least whilst in my custody). "It's like the Wii but BETTER!"
"Ugh".
Next we go on a trip to the emergency pharmacy. Flea treatment: €28. Standing in line for 45 minutes with twelve elderly gentlemen with lengthy questions to ask the poor sole pharmacists and the local slightly disturbed man who has "had a fall" and needs bandaging up and anti-psychotics: priceless.
When we get back and the dog is fumigated, Lashes turns to me with the sinister cheery smile of a scout leader:
"Now we make a volcano! Out of CAKE!"
"Says who? I did not agree to this".
"Yes you did, you said we could make a brilliant cake on Thursday because Thursday is a holiday. Today is Thursday".
"Sh.. ok. But I'm warning you, I don't think we've got half the ingredients we need".
"I want molten lava! Made from jelly! And a ski lift! And dinosaurs".
"Whoooa! Ingredients, remember!"
"Ca va aller, maman. We will use jelly and Côte d'Or". (Where have I gone wrong, or is it that Belgium has gone right? This child does not like Cadburys, but only Côte d'Or, the spawn of the evil Kraft empire. Serpent's tooth, sharper, child, thankless).
So we did. It is a crime against cake but they are happy. And it is a public holiday, so my inner pastryfascist is en vacances. 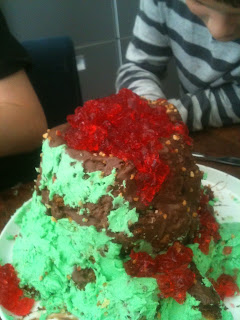 I should probably dedicate it to my father who is now an Ash Tsar, but frankly, I think it's the last thing he needs. I was thinking 'Mount Type 2 Diabetes', but Lucy (do you read Lucy's blog? If you don't you are missing out big time) suggests it should be called Popancreaspetyl and I like hers better.
It's ok, it's not a public holiday tomorrow. I hope.
Posted by Waffle at 18:35

I am thanking my lucky stars we no longer have a dog and have never had a hedgehog. My husband used to love catching and cracking fleas off the mutt - eurgh, seriously.

Now I want some cake! Tch.

When we'd had sheep on our field all summer, years ago, the place was infested with ticks all autumn. Chester used to come in smothered with them. Every time he'd been out, I used to have to spend half an hour with tweezers de-ticking him. They got everywhere, between his toes, fringing his ears, on his scrotum - sorry, but it's true, I got closer to that dog's bits than I'd ever expected.

Chester was a dog, I should emphasise.

Does this make you an Ash Tsarina or some such? I am somewhat confused though as I thought your dad was a fish boffin nota volcano one. Either way a Tsar must make up for the fleas which are gross.

Z, that doesn't make it better.

Unfortunately Cadburys is now the adopted spawn of the evil Kraft empire, since they were taken over earlier this year? Last year? I have converted to Lindt. Probably owned by evil Nestle, but a girl's gotta eat.

We, too, get ascension day off. The reason it is always a Thursday, as I noted this time last year, is because it is 40 days (and 40 nights) after Easter Sunday. You might have thought that Christ might have had the good sense to wait 44 days before ascending, then we could all have had a Monday off. Bad planning by The Almighty there.

The Queen - You make an excellent point, Ma'am. Where indeed?

FC - the Lord distinctly missed a trick there.

Z - Mmmmm dog testicle de-ticking. It's all glamour, isn't it.

Betty M - I am so glad you asked. It ACTUALLY makes me an Ash Tsarevna. I wikipediaed it.

Lola - I know, but I am choosing to pretend that never happened. It distresses me deeply.

I now have a black cat. I will never find any fleas until they find me first. (For some reason, fleas & other blood-sucking insects never go after the husband.)
I thought Cote d'Or was owned by some Swiss company (or has that been subsumed by the mega-giant Kraft?). Once when living in rural Canada, in solidarity with local farmers, tried to boycott Kraft...which meant there was NOTHING we could buy from the whole dairy counter in the local grocery. Eventually had a cheese crisis and cracked.

That cake is brilliant. Just... brilliant. I am in awe. (This is not sarcasm - I really am)

The sad news is that fleas spend a good deal of their time off the dog. daily vacuuming for a while will usually get the situation under control if is doesn't drive you barking mad first.

Nooooooo Ellen. (I know, really. I have been washing blankets and covers and singing dark curses all the while)

WV "fledic" which seems to include fleas and dog's testicle in one made-up word.

The cake looks like the sort i would dissapprove of when making it with the munchkins, then devour several large slices once they were tocked up in bed. I am weak.

I have basically eaten the whole thing, Lesley, while they were at school. I am not only week, I am repulsive.

(And thank you, Sewmouse, I will convey your compliments to the, uh, creative team).