Do not wear your rights. Please.

Prizes prizes prizes
The school fête was a little dull this year (compare and contrast this, my favourite ever year, which we eventually worked out was supposed to be approximately Mamma Mia themed, when the boys wore swimming trunks and danced to Erasure's 'I love to hate you' and the girls wore bikinis made from CDs). Stalin was not even dressed up. Fingers did an exact re-run of the kitschy cowboy routine from 3 years ago, whilst Lashes was skulking at the back of some kind of weird colonial spectacular. "I am an African" he told me. "Because I have a legging noir. The ones with cameras are aventuriers". Er, right. Apart from that, the whole event appeared to be sponsored by Jupiler, which seems a sensible way to deal with having to spend an afternoon in the wind tunnel school yard being hit up for money for appalling tat whilst toying with a tepid hot dog. If you like beer. Which sadly I don't.
Anyway. The whole thing was almost redeemed by the "tombola", which is actually not a tombola in the sense of the summer fêtes of my own youth, and more of a sort of administratively officious raffle. Either way, we totally ruled, with FIVE prizes for ten tickets purchased. Impressive, no?
No.
Our prizes were:
TWO pairs of (I suspect free with purchase) Leo (substandard Milka KitKat pretender) branded purple fluffy slippers
One skull motif trivet: 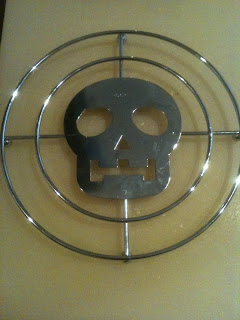 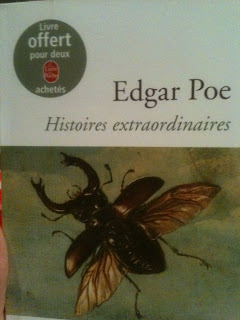 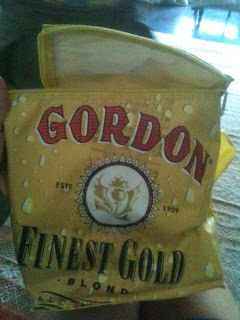 The children were excessively pleased with "their" prizes (even though the tickets were both bought by me and had my name on).
"Only ONE other person in my class one a prize" said Lashes, exultant. "Théo".
"Oh? Did he win anything good?"
" One of those square plastic shades you stick on the car window. With the Little Mermaid on it".
We all fell about laughing, because nothing puts a shine on your shit raffle prize like someone else's even shitter raffle prize.
Lame Euro Merchandise Part 1
A new occasional series, now, which I am calling "Lame Euro-merchandise". Courtesy of Beatrice, please marvel at these 'Wear Your Rights' t-shirts. I urge you in the strongest terms to follow that link and wait for the revolving gallery of "celebrities" wearing the t-shirts to go full circle. It's like an aesthetic car crash. I have found it literally impossible to decide which of them is worst.
1. Barbara Hendricks, that is NOT a good neckline for you.

2. Bianca Jagger looks terrifying, and having a noose round her neck is not helping.
3. "Mark Makai from Hungary", you are actually James Blunt's lovechild and I claim my prize, which I sincerely hope is not the t-shirt you, or indeed Emilia Ciovor, are wearing.
Why are these t-shirts so bad? Why? WHY? Would it be possible to design a worse t-shirt? Why is there a picture of a pleated skirt on the "fair trial" t-shirt? I have no answers.
Photo of the day
My photo, and actually probably my story, of the day, beating off strong competition from some excellent cucumber related copy, is about exploding alarm clocks in Ghent Ikea. This is the happiest alsatian you are ever likely to see.
Oh. I can only get a tiny version. Click on the link, it's a joy.

B: Is this Belgian terrorism?
Beatrice: I think it is a flamboyant wake up call to alert people to the fact there are many excellent flea markets in the region.
Indeed.
Posted by Waffle at 10:29

I took it that the alarm clocks had exploded spontaneously. Reading the article was a slight disappointment, although the dog made up for a lot.

Those t-shirts, while hilariously awful, were also quite irritating. Not only because they were so dully righteous, but because you could pick so many holes in many of the statements.

Why thank you, er, "Calco". You're "little cute" yourself.

What sick, demented group of people would explode alarm clocks in Ikeas?

Do they have a grudge against flat-pack furniture? Has Ikea done something offensive to some major (or minor) religion?

The story was woefully lacking in such details. However the dog was excellent.

Those T-shirts are the most joyless items of clothing I think I've had the misfortune to encounter.

I haz got to get me one - guaranteed to cut a clear swathe through to the bar on a night out wearing one of THOSE.

I think the problem with "old skool waffle posting" anon, is that I used to leave the house on a more regular basis. Most of my inspiration and ideas came from long, ridiculous journeys on Brussels public transport. Anyway. I am sorry I am crap now. I will go and impale myself on a ceremonial speculoos.

Does anyone else think that dog looks like Scooby Doo? Waffle, you and your posts rock. After all, as has already been said, you are little cute (teehee). And remember, "Everyone has the right to take part in peaceful meetings and set up associations, including trade unions, and/or to join them". Thank god.

Jessb - That is indeed an exceptionally catchy slogan, is it not. Wear that on cheap poorly printed cotton and be the envy of your neighbourhood! (and thank you xx)

I'd like to wear one of those shirts around my lovely hamlet of Los Angeles, as many of those rights are somehow a hotbed of contention.

And it fits so neatly on a small, shoddily constructed and ill-coloured tee-shirt. Europe, you do us proud.

I'm quite enamored of the website name: flandersnews. It's better than regular news. My favorite part of the photo is the man pointing up and the dog looking up. Good dog!

My cat Layla just wrote that. I suspect she may be channelling Satan.
Have forgotten what I intended to say now. That's what happens when youR kitty is POSSESSED BY THE DEVIL.

They serve beer at school functions in Belgium? That is awesome (even if you don't like beer.) You would never see alcohol at any American public school event, more's the pity.

Those are the worst t-shirts I have ever seen. Why would anyone want to wear a sermon on their chest? Not to mention a noose, or random implement of torture.

Yes Patience. Basically in Belgium, beer has the status of a soft drink, served at, for instance:

It is one of the things that makes this country great.


Nimble - You are quite correct. Flandersnews is WAY better than real news.

Bianca Jagger looks VERY angry about being made to wear such a poorly designed and manufactured T-shirt.

I quite like that trivet. And beer. I am sure I will pine acutely for beer when I have to attend all those years of school events here in the prim and parsimonious USA.

The skull trivet is a total score. I want one!