Oh man, I am very tired. If today were a Pokémon attack, it would be called something like "Intense Torpor - mimics the sensation of drowning in wet sand whilst listening to that plinky plonky music they play in sub-standard spas". Benelux was - probably apocryphally - declared the hottest place in Europe this weekend, so we have all mainly been staring in confusion at the sky and waiting for it to start raining locusts, or blood, or something, because it must be the end of the world, there is no other explanation. To give you some indication of exactly how dead from the neck up I am, I have not taken any anti-histamines this weekend even though my sinuses are entirely clogged with pollen (and even though I LOVE anti-histamines, yes please, the drowsy kind is just fine, mr pharmacist), because I was worried I might actually forget to breathe, or might mislay my children on the 2 minute walk to the park, or similar. It was like that from about mid-week onwards, actually. I think someone is secretly sedating me, my brain has been replaced my some kind of whipped marshmallow. Probably the assassin, the fucker has taken to calling very regularly even though I never pick up the 'phone, and we know all about his covert skillz.
There has been a lot of Pokémon this weekend, anyway. Someone on Twitter kindly pointed me in the direction of this amazing tool, so mainly we have been making Pokemon cards of ourselves. These ones aren't particularly funny (a shred of wit or intelligence about me today since I have exhausted myself staring at the sky in peasant terror), but the potential is limitless. Well, it is limitless if you have ever been enslaved by the evil empire of Pokémon, which I have in several ways, since apart from the children syphoning offf most of my net income into poké-products, I used to work for the people who produce the actual cards back when I had a proper job. There was a time when I could have told you the name for most Pokémons, and the rationale for the differences, in three languages. Which I am sure you will agree is an excellent party trick if you only go to parties attended by 8 year old boys. Ideally in the year 2000.
ANYWAY. We made these. 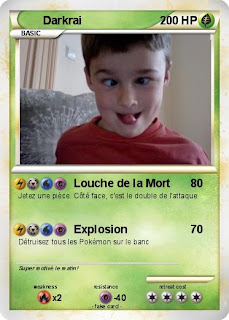 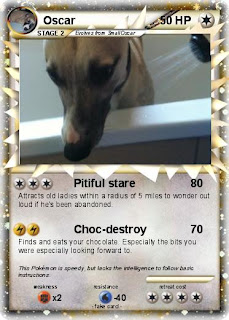 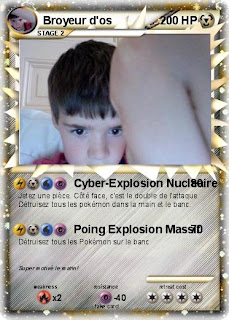 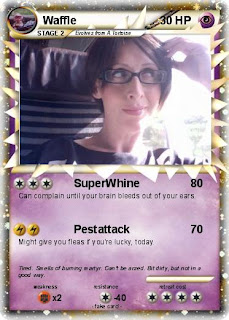 (Yes, Oscar has fleas. It's been a delight. I suspect he got them from the CFO's hedgehog when we went round there. I was quite impressed with the hedgehog, incidentally, which does not seem to have received the memo telling it it is nocturnal. It spent its time sprawled around the garden in a sort of passive-aggressive territory war with the tortoises. I have some film of it, but is quite brown, silent and boring, and I will spare you. )
Do make your own, they will be a million times funnier than mine, I am quite certain.

Oh, today was mother's day too in this country (can we still call it a country after a full years sans government? I have my doubts). I was greeted, very sweetly, if slightly early, this morning with a Petit Filous, and four Oreos (reduced to two after enforced "sharing") on a tray, and a poem recited by Fingers, complete with actions. Then, finally, my long awaited camembert jewellery box, a crucial rite of francophone motherhood, complete with vanity mirror and "compartments". Lashes jumped the gun somewhat, summoning me to his father's house on Friday afternoon for what he described as "A NINTENDO EMERGENCY YOU HAVE TO COME NOW, MAMAN". I dragged myself there with much eye rolling and muttering only to be presented with a magnificent surprise tray featuring: a slice of Crabzilla, some pineapple juice, a card, and a vase he had lovingly created out of a beer bottle Aww. They are very lovely boys, and I will look back on these moments, I know, very fondly, when they are stealing out of my handbag soon.
I am stopping, because I will definitely forget something crucial, like, my own name, if I continue trying to type in my current state. Please send fish oils or something.
Posted by Waffle at 21:34

This is not a comment on your post, I am just being REALLY nosey. Who is CFO? I have been reading your blog for ages hoping one day it'll become clear. It has not and now I am just REALLY curious (and nosey).
Sorry.

He's the kids' father. Check out the "Dramatis Personae" on the right for more details!

Aww lovely kids ! but then,it's only right they treat their mum like that with all you've been through for the birthday cake.

I got a nice photo holder covered with what I thought were paint staints but turned out to be butterflies and thanks to my 4 yrs old i can forget my dreamed Longchamps and Delvaux home with what has been labelled "my best bag ever" decorated with hearts and strange cabalistic signs ("I had to be careful with the painting mum because "madame" said it was really expensive" , knowing how my princess can be generous when it comes to painting,I really appreciate the effort ;) )

Thanks for the Pokemon hints,that's ll sure be a hit with my boy (he's into bakugan but not being a six years old,I can't see any difference between the two things and my only pokemon memories are christmas gifts for my man's nephews ten years ago)

as for the weather,storms are for wednesday (or so the weather lady said)

typing error,forget the "home" between "Delvaux" and "With" , that's what happens when writing two messages at the same time ;)

Mercifully, I/ we "missed" Pokemon, Telly Tubbies, Bratz and most of "My Little Pony". Not, however, Barbie & her entourage ("Let's go BUY Barbie a boyfriend, Mom"....GREAT learning experience, that!) and, dare I remember, The Spice Girls(all now long abandoned).
The only (possible) lasting effect? A shoe "addiction" (the higher the heel, the better) -- but daughter was already shoe-focused at 18 months...so this may have been inevitable, later influences or not.
Happy Mother's Day!

I loved this post! Am now off to make Pokemon cards..... Happy Mothers' Day, Waffle! Do you get two Mothers' Days then? The UK one too?

Not fish oils - iron. (Not as in ironing the laundry - there is NOTHING on God's great earth which laundry ironing can help- but vitamin iron... [if nothing else you can at least take some comfort from knowing that my brain is more muffled than yours. I cannot think of how to describe iron] Ah yes, supplement.) Iron supplement. Make sure you wash it down with a half pint of cold white wine - it helps the absorption or something... (It could be worse. You could have scooped a human poo out of your handbag this morning. "Look mummy, me poo do-ning rolling into your bag HAHAHAHAHAHAHA")

I received the camembert jewellery box last mother's day - I am slightly aggrieved to learn it was just one of millions!
Go and knock yourself up a liver and spinach omelette, or chew on some iron railings - probably tastier.
Mya x

I saw this and thought of you

You will die of cute.

Oh dear lord, Reluctant Launderer. Your child defecated in your handbag. You win the terrible day prize hands down. Iron eh? Will investigate.

Thanks for the award (I think...) Unbelievably it got worse. Will add to your "ups and downs" post (More "down", less "up")

Play those favored captured minutes in slow-moving activity use VivaVideo There are a wide variety of features offered with VivaVideo.

This indicates that you could let go of the pressbooks pestering cable in the method, while you are podomatic.com hectic keeping and also grooming your facial hairs best trimmers furthermore, reenergizing centers on the beard trimmer trimmer is likewise a wonderful alternative official guide for saving after the electrical power costs.