Let us start this long overdue post with Belgian news: Lady Gaga day on the Brussels metro seemed to pass off without incident, to my sadness. I was hoping for a flashmob at the very least, possibly some kind of mass civil disobedience. This video about it is fucking hilarious in every possible way. I love the voiceover man's incredibly soft, deadpan delivery, the fact they have featured metro Kunst-Wet, which is not at all open to misinterpretation by English speakers, oh no, AND the lady from the STIB using the expression: "Highlight the modern and trendy image of the Brussels metro". At this point I had to restart the video and watch it again, gleefully, in full screen as she apparently says that in front of what appears to be a scene of grimy, early '80s soviet cinema verité, but is in fact Brussels's busiest metro station. I love this city.
I was, however, slightly disappointed not to see a single person wearing a dress out of américain or hatching out of a giant witloof. I feel I missed a trick by not dressing up myself, really. I wish someone had sent me to wander the platforms in prosthetic horns and giant hoof shoes. I would happily wee through my fishnets for money.
Instead, I did enjoy this new platform signage, which made me think of B's perpetual fury at Brussels' commuters and their total inability to grasp the basics of getting on and off trains in a reasonably logical fashion. This is now proved by the introduction of amateurly painted ARROWS to assist them. Wonderful. 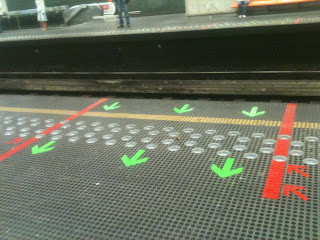 If they really think this is enough to convey the message "LET PASSENGERS OFF THE TRAIN FIRST, YOU UTTER MORONS", I think they are woefully mistaken. I will be looking forward to seeing how this is interpreted by commuters. What would Lady Gaga think? I bet she could do a better job of it.
Apart from that, nothing is working today. The "book" is full of holes - mysteriously sliding tenses, characters I am bored to fuck with, plot screw ups, a creeping sense of dread at the pervasive crapness of it all. I am trying to keep a JK Rowling style redemptive narrative of triumph over adversity in my head to spur me on, through the financial apocalypse and the self-doubt and the embarrassment and the hiding the electricity bill under the book case, but there is a nagging voice in my head that says 'somehow, I don't think that yet another novel about middle class adultery is going to spawn a multi-million pound industry and six film extravaganza, you dumbass'.
On top of impending literary and fiscal doom, my face is full of gigantic insect bites, my lips are dessicated like Ramses II's scalp and I threw my pants in the bin in a fit of rage earlier because they were too tight. I am behind on everything except my invoicing, which I am compulsively, obsessively, up to date with. Instead of actual trying to generate some revenue, I am now watching the French news (which I usually wouldn't touch with a shitty stick, but I have a terrible compulsive need to know exactly what they are saying about DSK. They are making me pay for my prurience with lengthy reports about the level of compliance with the French MOT) drinking a large gin and eating a bowl of spinach. There is pasta too, but I realised too late there are only 5 tortellini left in the packet. It's an almost Hurley-esque portion (apart from the fact that pasta is carbohydrate, obviously, and that I am the size of six Hurleys. Or a Hurley from Lost. I am reduced to my Gap occupational therapise trousers that are made of some kind of suspiciously wipe clean material. My top has both blood and tomato on it. I am 36).
I bet you're glad I've updated you on public transport, my dinner and other whining, finally. You were holding out for that weren't you? I hope your day is going better. Perhaps a monkey brought you banana pancakes in your hammock? Perhaps tiny ponies brought you mini choux à la crème and gave you a gentle massage with their tiny hooves? No? Ah well. Maybe tomorrow.
Posted by Waffle at 00:05

I feel for you, I do. I blame this awful month of May. I chronicle my own May woes herein: http://dinnersbyjodi.blogspot.com/2011/05/i-miss-making-dinner-may-23-2011.html You see? Things are not much better here in the U.S. Great Plains, and we have tornadoes to watch out for.

I'm sorry, but I love your whining. It is so much more entertaining than my own - your two types of Hurley reference made my day.

My whining relates to me currently being in full on avoidance mode as I am meant to be going to a graduation ball with my law lecturers and other practising members of the profession (oh joy). I am such a social recluse I have never been to a ball before. I am shopping on-line in dismay with only my brother's opinion for help which includes his insistent talent for picking the Dierdre from Coronation Street outfit on every site I show him. See here and imagine the fat gold belt: http://www.houseoffraser.co.uk/Kookai+100%25+silk+mixed+print+minidress+with+ruffle+hem+d/148515406,default,pd.html?cgid=301

I hope this makes you feel a bit better. Also, I am 31 and haven't learnt to look after myself yet. I think you're doing pretty good, coping with yourself, a weepette and two children. Pat yourself on the back, surely?

p.s.
Keep going with the book. I'm sure I'm not the only one who'd be interested in reading it.

I will be helpful and tell you that this mornings news on Telematin (feel free to mock) is taking the minimising by providing some context tack.

Quick blurb about DSK (word sperm only mentioned once, mercifully, I don't want to eat cornflakes with teenage boys with the chorus of sperm, sperm, sperm going on behind me).

Don't watch it, you will start agreeing that DSK really not so bad and have to get even more obsessed. Okay, that's just me.

I can send you a stencil ("HAVE SOME MANNERS, FUCKWADS") and a can of spray paint if you wish to conduct your own experiments on the metro floor (sadly, it would be its own reward). I'd do it myself if Brussels would promise this at deafening levels for fifteen hours straight.
http://www.youtube.com/watch?v=jmR5Aat11P8
It's magic, I am not in the habit of listening to it, but pulled the headphones out while it was on when the local dillweed sat in his car with the volume blaring three feet from my ear (to spousal chagrin). He got so flustered, that after barking at his wife yet again, he tried to start his engine when it was already running. He makes me do it, he's the voices in my head (literally).

oh man, i missed gaga day on the metro! and i have not yet seen these signs. I will join B in the yelling :-) although I've been yelling happily enough without the signs for a while now.

Sorry 'bout that -- a glitch in my system.
Trying to say that living in the boondocks, Leuven, 20 kms/ 12 miles east of Brussels, means I miss almost all these "events".
Thought, until I viewed oh so typical Belgian transport video, that Gaga had been swanning around town on the underground. I continue to live in hope!

That video is quite alarming. Are all Belgians like that? And the weird pervy voiceover....yewwww...

This morning on Radio Canada (the nationally funded French radio station) I was told that the Brussels metro has made a rule against playing any music with French lyrics to appease what sounded like "l'irlandais". Are there roving angry Irish people in Brussels now, or is that an actual term for Flemish?

No pony massages here. But while lying in my hammock in a shack on the beach in Mexico I watched a beautiful Busby Berkeley number performed by geckos on the ceiling.

Meanwhile in real life I helped my spouse to and from his colonoscopy. And looked on the bright side of having a car out of service (regular exercise!).

@ali_jane: I'm (almost) willing to bet the word was NEDerlandais, meaning Dutch-er-Flemish-speaking people.
Ahhh, the language situation in Brussels is "hotting up" again, just in time for the holidays. It's going to be a long summer!

@Pat (in Belgium)
Thank you! What's ridiculous is that I'd thought of a potential language connection and was all "Gaelic is really far from Dutch", so I should have been able to figure that one out.
I'm in Quebec, and am worried this will give them ideas to ban music in English in public places. So far it's just illegal to have English on signs that is more than 50% the size of the required French on the sign.