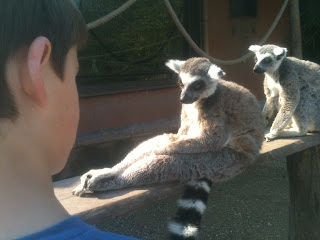 (Lashes, explaining to a lemur that it lays eggs made of finely milled cubic zirconia and nests in viking longboats. Scornful lemur is scornful.)
Not much to say tonight, I have just eaten some paprika crisps and I think my throat is swelling up. However, the Scary Bat Caves had not lost any of their magic. Well, they have closed two of the 'poke your own animal' exhibits. I thought that presumably international animal welfare norms had led to this policy change, but when I asked a staff member about the pick your own snake barn closure, she said, wearily "people kept stealing the snakes". Despite no pick your own reptile, I have had a blissful day staring at furry stuff and being told utter crap by my eldest child (The youngest spent the whole day walking twenty yards behind us, which is exactly how I used to send my father into incoherent rage, aged 14). Example:
L: The baby kangaroo lives in its mother's pouch for 2 years until it is full grown
E: But then how does it fit? Because it is fully grown and so is the mother, so how does it get into her pocket?
L: (patronisingly) You don't understand Maman, the baby is fully grown, but not fully grown like the mother. They are BOTH fully grown.
E: Yes, you are right. I do not understand.
I particularly liked how after a the €800000 entrance fee, both children spent a good hour and a half sitting on a patch of scrub ground looking for caterpillars on some nettles. Really? This is what amuses you? I have many perfectly good weeds and some bare earth back at home you would be most welcome to, hell, I'd thrown in a few stones for free and all the slugs you can catch!
Apart from the obvious attractions of earth and larvae, we were repeatedly assaulted by lemurs, fed some giraffes and spider monkeys, and discovered PIZZA CONES. 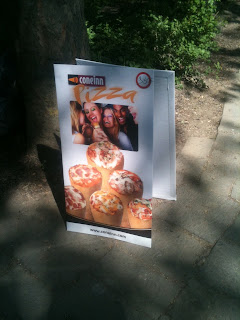 Look how happy they all are to have discovered pizza in a cone! Their whole lives have been but a set of empty, mechanical preparatives leading them to this, this convenience food nirvana. On a careless first glance I thought they were novelty ice creams made to look like pizza. I could sort of get behind that, cognitive dissonance, sure. But Fingers insisted I look closer, and sure enough, no, they are pizzas in cones. At this point I surrendered entirely to animalistic enjoyment of my ice lolly and the sun, then tried to catch myself a peacock, or a coypu, or ANYTHING to mate with, because the end of days is surely coming, and fast.
(other sign the end of days is coming, and fast: there was a deer in the petting zoo corner that was insistently following a gigantic turkey around, licking it. It got very angry if any other creature came near the turkey. This is not normal. No-one can lick a turkey and get away with it, surely. AND the lemurs were mortally scared of the ducks. Properly, twitchily scared. I think this shit comes straight out of the Book of Revelation).
The end of days does not seem inclined to come tonight, though, so I suppose I will just have to unearth some clean clothes and deal with the glaring and unacceptable absence of Pritt Sticks for school tomorrow, my spotty countenance and incipient migraine, the cowboy outfit that must mysteriously be sourced for the school fête. I also vow to get to the bottom of the repeated, insistent demands for "a used lightbulb and wooden spoon" from Lashes. It's been a lovely weekend, I hope yours was too.
Posted by Waffle at 21:01

I bet that woodspoon will win a total makeover for Mother's Day (when is that again ? ) but used lightbulb ?

He is probably making a bomb, Marie, and it has nothing whatsoever to do with school.

WTF is a pizza cone?

I am afraid, Margaret, that it is a pizza in an ice cream cone.

oh God, that endless waffly (no offence Waffle) drivel that kids talk. I love my son but we went out a walk yesterday and every conversation started:

*sigh* no - I do not know Minecraft, but carry on sweetie.

Thereafter more burbling that could EXACTLY have been about lemurs laying eggs of cubic zirconia or how to make a hot air balloon for your minecraft character.

It's a computer game waffle, downloaded from the intertubes. Fingers and Lashes will love it. You, however, it will drive to sleeping in the Weepet's basket. Move over, is there space for another fully grown one?

I was afraid you were going to say that. Is it just a Belgian thing, or has this cancer spread across the rest of the continent?

Now did you test the pizza cone? Please say you did.

After you mentioned Pizza Cones on Twitter, it's all I can think about.

It's like the whole of my 26 years of life was leading, just LEADING me to the discovery of the existence of Pizza Cones, so that I might go forward and eat them till I weight 600kg and don't even GIVE! A! FUCK! BECAUSE I HAVE PIZZA CONES, BITCHES!

This pleases me, Danielle. Do you think the cones are sweet? I fear that greatly.

Look how the scornful lemur in front is able to fold his feet just like hands! It makes him extra scornful.

The used lightbulb will be covered in alternating layers of paper and glue, papier mâché style, and when it's fully dry, it will be tapped on a table, hard enough to break the glass, but not so hard you break the paper layer. Et voilà, free musical "instrument". And yes, the spoon is for Mother's Day, I'm afraid.

Oh Hilde. I weep. I had to buy a last minute Camembert box today as well.

Hope for you that this camembert box is part of the homemade bomb plot and not a jewel box to be. I had to urgently run to shoe shops as a shoebox was requested and I swear I didn't have any boxes left (hand on my heart!) , (un?)fortunately I found the perfect clothes match for the shoes and earrings as well. Mother's Day is such a great thing !