You are all on your holidays, you English people, so I might as well just write about the dog, I reckon.
The weepette is extraordinarily world-weary at the moment. 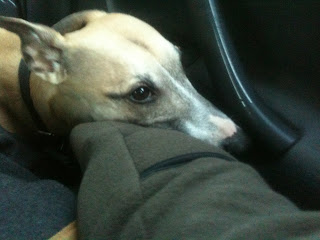 It's strange, the amount of weary indifference this dog can convey. I fear he gets it from me. 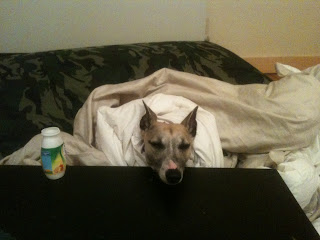 Sometimes he lies like a broken corpse after a devastating fall from the 48th floor. 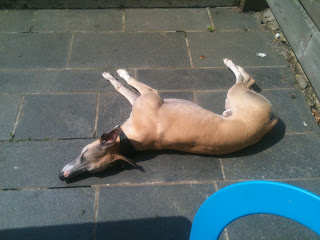 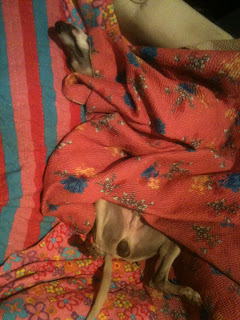 'This?' his look seems to convey. 'You need this? Give me a fucking break. You look at the ratchet screwdriver like it's Fermat's last theorem. Let me rest my heavy, heavy head on it while I contemplate the futility of existence'. 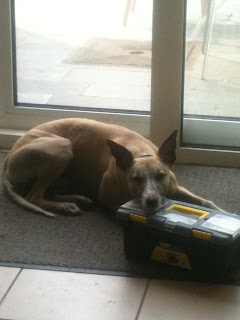 This morning it rained for the first time in weeks, and the weepette, whose memory is unreliable (but not as bad as the simple dog's, god this made me laugh) had entirely forgotten about rain. He stepped outside gingerly and froze, appalled at the whole water from the sky thing. Fingers had to drag him down the road in miserable confusion, claws scritching along the pavement as he tried to cower under cars and make a break back for the house.
"Come ON dog" we coaxed (bullied) him as he stared in abject misery at us, unable to make any sense of the falling wetness. 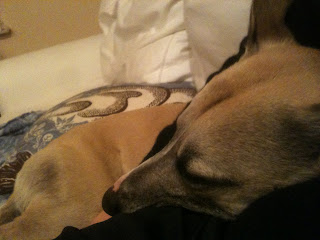 He really does look extravagantly unhappy most of the time. That's his superpower, looking extravagantly unhappy. If I leave him outside a shop for two minutes, he will gather a small crowd of concerned well-wishers within seconds. "Poor little thing!" they say, as Oscar cowers, with a sheepish glance at me. "He looks so folorn!"
I bet I could leave a child wandering the streets for a similar length of time without exciting the slightest bit of attention. 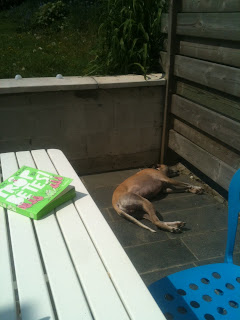 It made a nice change, then, when someone at the gulag looked at him appraisingly this afternoon and said "isn't he getting a bit .. FAT?"
Ha. 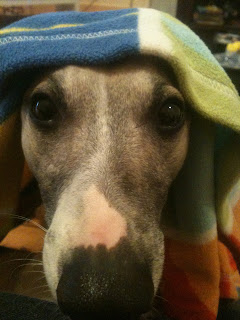 Poor Oscar. Body dysmorphia dog is body dysmorphic. He will hide in this blanket, stony with despair, for 6 months now. We have so much in common, he and I. He's even going bald! All he needs is a purple tracksuit and a face like a Glaswegian heroin addict.
(Belgium, incidentally, doesn't seem to be going big on the whole royal wedding thing. I asked Lashes if anyone had mentioned le mariage to him at school and he looked blank. I tried to explain and he looked blanker still, and deeply bored, as well he might, then started on a long anecdote about whether three horned cameleons could lose a horn. ).

Didn't you all have a significant anniversary the other day? Happy first year of no constitution! I believe the traditional first anniversary gift is paper. Maybe I will get you a gift of a print-out of our glorious U.S. Constitution. We don't use it all that much these days.

I tried to educate Daughter (13) about the British monarchy in general and Diana's brief and unhappy stint therein in particular the other day. We ended up looking at "Diana's funeral - highlights" on youtube.

My brothers indifference in the face of a fiercely and hysterically royal-worshipping Nana was hilarious.

Mixed with the slightly suicidal (Obsessed Nana is obsessed with Lady Di), "Well... They said that about Diana."

If you're going to rest your heavy, heavy head on something while contemplating the futility of existence, a toolbox is just the thing. Especially if you have an insurmountable aversion to toolboxes, portfolios, and the like. Tell him rain is necessary for (infernal) dust abatement, he will understand.

Ever since being informed that you have no neighbors, I feel the need to touch the hem of your purple tracksuit.

There was only one pack of the "Royal sweets" thing in Stonemanor yesterday and they told me they were selling like mad. Was I the only one in that wedding frenzy ? can't believe it !

I did raise the point of the royal wedding at school but then I had to,they had my flag. Making a little something special for the kids tonight as my youngest requested a "princess party" , royal glittering cupcakes, only if i manage the glittering stage that is :)

and as for poor whippet, my man would agree on the fact that toolboxes are so depressing ;)

My sister-in-law used to have a collie, the Lassie type. Its head was so narrow that it seems that there was little room for a brain. They used to send it to kennels when they went on holiday and when they came back it recognised neither them or their house for at least a day.

Margaret, I don't believe we've reached a year quite yet, but we HAVE beaten Iran in the 'longest time without a government' competition.

Frau Antje - I FULLY APPROVE. You may touch my hem anytime.

Marie - Stonemanor is too bloody far and I always come back with 226 bars of cheap chocolate. I'm glad you did it for me though.

It seems that all weepettes are not allowed out into the world without perfecting that amazing combination of ennui and guilt inducing pathos. And the word verification "word" I am now expected to type in to prove I am a human is "irlymen". I think you have to say it in a heavy Cornish type accent.

Waffle, I'll always respond to an emergency choc bar call,that's natural solidarity ;) even if this case I'm afraid those 226 bars are already on my hips (well not quite,but you get the picture)

I've been to Waterloo this time and tried the train trip. Apart from the rain and me not having an umbrella, it was a great thing to do. (glittering cupcakes were a hit,yipee!)

My bad--you're just been without a government. WOuld you like us to send over Donald Trump? He seems to want to start a political career.

My wv is possibly a Clue to the royal succession: kingolt.

your dog is a better actor than johnny depp! we had a dog for 17 yrs who knew to act for the mama. he was a mutt but he shur had my number! i really miss the big, silly puppy-dog

Thank you for the simple dog link - haven't laughed so much in ages... also the Marmot eating a cracker

Nice chirpy little mutt you've got there, bearing the weight of the world on his shoulders. "a tracksuit and a face like a Glaswegian heroin addict"... what a wonderful image!
Funny post, enjoyed reading.

We honestly want to serve you the simplest matters with 100 percentage satisfactions. It is extraordinarily exhausting to say as soon as exactly must be forced to money your test. Usually it http://www.unitedcheckcashing.com ought to terribly tough to cash if it is now not official hours.check cashing