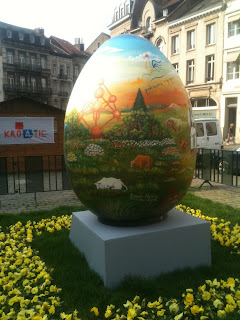 I buy Tesco own-brand vodka for (really) cleaning (windows, mirrors and such) but find the experience a little shaming, especially when there is a combined purchase of OTC drugs (co-codamol, cough syrup, antihistamines) and tampons, as though I could be imminently hysterical and self-medicating on a very strict budget.

Emma, you are ashamed to buy alcohol in the supermarket because you are British, and thought it is perfectly normal to do so, we feel alcohol should be bought from an alcohol shop, not from the supermarket like we NEED IT EVERY DAY along with food.

I am delighted that you keep me up to date with the health of your domestic appliance, yes. This is what I come here for.

I share the alcohol guilt. I am always waiting for the hand on my shoulder, followed by a stern, "And just WHAT do you think you are DOING IN HERE???" whenever I set foot in a liquor store (which is what we "call a spade a shovel" Canadians call the stores in which you buy liquor and beer. Only beer can be purchases in convenience stores and no alcohol at all is sold in supermarkets. We are a confused bunch.).

I blame the tea-total mother.

When I saw the scene on the Easter egg in the Sablon I conjured up this scene of a neolithic Brussels, where the tribes gathered together on the plains to build up a giant atomium statue out of wood. A thousand years go by, and the pre-industrial farmers rebuild the decaying statue out of bronze, the Belgian equivalent of the Colossus of Rhodes. Finally, in modern Brussels the atomium has been rebuilt in steel (actually aluminum I think), the next stage in the life of this statue which has stood since the dawn of time.

The bottle of Cointreau I bought just last week is already empty (the week before it was a bottle of Amaretto...both are in the recycling pile; does that count for something? Anything?) -- which means that not only am I on that short, slippery slope sliding into alcoholic oblivion, I am also going to weigh a TON when I get there. (Puts a whole new spin on the phrase "hitting rock bottom".)
I have also lost count of the number of chocolate eggs consumed today (just in case all the sugary booze wasn't enough!).
So, no surprise that I'm heavier than I have ever been in my life (including pregnancy).
Just thinking about it makes me want to have a drink but it's Easter Sunday and ALL the stores are closed (unlike America where there's always something open 24/7).

The only time I feel shame buying alcohol is when one of the teenagers requires me to get something ghastly for them - can you imagine the shame of buying Lambrusco, when you'd rather buy a decent whisky!

Pat (in Belgium) is clearly on the same slippery slope as me. I sank a bottle of cointreau in less than a week - I haven't got to the Amaretto yet, but there is still some vodka, gin and tequila left from the (whisper it) 17 year old's birthday cocktail party for me to finish, so plenty of time. I don't even like tequila. And like Pat, I now weigh more than I did when pregnant - and I still can't be arsed to do anything about it.

Isn't Ikea the model for Big N Large, the ubiquitous store in Wall-E, sure to doom the population of the earth to having to live in space (and I hate space, by the way) when we have overwhelmed the planet with the making, reconstituting, and discarding of mostly cardboard furniture? I haven't got the balls for that place. Only the meatballs and lingonberries can make me enter there, but I am afraid I may not make it out. Say, tell us more of how to get a reconstitutable handyman. I want one. I will engage in some unholy consumerism to get one of those, and then I won't need a husband at all.

You and your readers are really enjoying your liquors a good deal more than is strictly necessary, n'est pas? From the mind of a little girl who was greeted every Easter morn not with candy but with a parent saying "the Lord is Risen" with an absolute expectation that I would answer "the Lord is Risen indeed" I am in the know on this - you are indeed drinking too much. Let me help you with that, and just pass it over here, please.

Yesterday, while you were trying to escape with a cheap flannel, I actually (absentmindedly) picked up someone's to-go order at the strip mall sushi joint when I paid the bill. I was so pleased when an employee chased me down saying "ma'am, I don't think that to-go order is yours." I suck at everything, includind drinking, which apparently I need to practice at, so I won't be so shite at it. As you say, phenol consumption may help, and we have hours left of the day, I'll try to make the most of it.

I have the liquor store deliver cases of wine, so apparently, I have no shame whatsoever. Weirdly, New York State sells beer in supermarkets, so I've been used to buying it like that since I was a pimply adolescent with a terrible fake ID. Even more weirdly, we cannot buy wine in the same supermarket; I think because we are essentially a British colony at heart and feel it is unseemly (i.e., French) to buy wine where we buy food.

I don't get the fear when buying alcohol but feel MORTIFIED buying toilet roll in isolation. If I'm chucking it in the trolley during a Big Shop it's not so bad because it just looks like I'm maybe taking advantage of a special offer on the spur of the moment but if I go to the corner shop specifically to buy bog roll I just KNOW that the shopkeeper is thinking "Oh aye; somebody was on the curry last night".

There must be an analogy between visiting Ikea on Good Friday and doing the Stations of the Cross. "The first station: kitchenwares. Let us pray."

Wouldn't it be nice if all Ikea furniture came with a pre-packaged Swede to put it together for you?

Bratwurst must always be boiled in beer for a 10 min. or so time before putting under the broiler or onto the barbeque grill.

Therefore, beer - like wine - is used in cooking and is therefore a legitimate purchase.

(Serve in soft white buns with lots of grilled onions and yellow mustard!)

Hmm. I have always thought of myself as more British in soul than American (what I actually am), but maybe not at all, because I have no shame about buying liquor. Which is actually sort of peculiar since we're supposed to be the moralistic ones. Maybe it's just that I'm not much of a drinker most of the time.

But then again, I do get embarrassed buying tampons, because apparently I am internally 12.

I am not surprised that creating the egg hunt reduced you to tears. I don't think I could have done it after suffering from cheery E. Euro cinema and too much tipple. Points to you!

There are class issues wrapped up in buying liquor too. Sometimes I'm still surprised that I'm allowed.

In my mind, beer is something guys buy - maybe this is what your mind thinks too and why it tricks you into feeling guilty.
Anyway, as someone already mentioned, it can be used for cooking - but I wouldn't use it for disgusting bratwurst (as the other poster suggested) or for equally disgusting 'konijn met pruimen' (rabbit with plums), but for those twice-a-year calorie-bombs which you can buy at the fun fair, called 'oliebollen' ('oil balls' - some doughnut kind of thing, but without the hole and not as dry).

I hate buying this combo the most: wine, chocolate (minimum 3 bars), chocolate biscuits and tampons.
its umm embarrassing but I still do it anyway!
I always feel guilty buying booze too, anywhere in fact. Especially as I swear the people in front and behind me me on the conveyor belt, without fail, are buying only healthy things like lettuce, yoghurt, tomatoes and soya milk. never alcohol. This is in Nettos people!

I pretty feel the same about buying alcohol in my local supermarket which is located yards from the kids school. I'm always afraid to bump into a teacher (with the inevitable "met X's mother in the shop,no wonder that kid is a pain,his mother's on booze" kind of speech)
It's the same with chemists really. I can go miles to buy certain medications I wouldn't dare to buy in my chemists-loaded street.

I sympathize with the candy eggs story too. had my son telling his gran this very Easter week-end about "the cloches" bringing him Cars eggs which he now hates ("flash mac queen is so for babies") and my mum giving me a "why didn't you tell me" stern look (with me giving back a "how was I suppose to know Flash was out?" shrug) , the whole thing just giving me strengh to go to HER local shop on booze-hunt...

Ha ha ha Marie, I had to go MILES out of my way and past 4 chemists with young male assistants to buy morning after pill a couple of years ago. That's normal behaviour, right? I think it is.

FFB - Yes. My chauvinist brain also believes it is a man's drink. My brain resides in the 1950s.

Tigerbaps - Yes. There must be no shopping that might imply ANY bodily functions.