So, I went to that Cube thing I mentioned for lunch today, balanced precariously on top of the Arche du Cinquantenaire. Bonkers, but in a very pleasant, if slightly last days of empire kind of way.
There are only 18 people at each sitting and on arrival you have to listen to a sweet, faintly embarassed, I felt, hostess tell you all about Electrolux's magical technical innovations and the harnessing of tradition and cutting edgezzzzzzzzzz, in a sort of dark dusty garret filled with 19th century weapons and shiny new washing machines. Then they escort you up to the Cube - not remotely cuboid, rather the kind of random shape you get when you try and do drunk Lego - and start plying you with champagne as you gaze out over most of Belgium, which was bathed in unsustainably beautiful sunshine.
This is not going to be a proper review, obviously, because I didn't take a picture of any of the food, or remember what it was, and most importantly, because of the booze. However, I vaguely remember the following. Amuses-bouche: Prawn thing on a piece of crispy prawn cracker-like toast tasting strongly of the sea (delicious) , anchovy thing on a sort of crunchy black rectangle a bit like a mini pissaladière (also delicious), raw mackerel with aubergine purée (meh, ok) thing all whilst standing outside watching misguided tourists emerge disappointed from the various dreary museums they store up in the Parc du Cinquantenaire. Then inside for a sashimi-esque fish thing that had to be viewed through a reversed magnifying glass that made it look small (no, no idea why, it was pretty small to start with). The bread came with a pot of peculiar herbs and a pair of scissors chop up and garnish it with, and some giant shards of intensely savoury crispy chicken tuiles as a sort of extra snack. And wine. Lots of wine. Two kinds. Then sole with cauliflower and cauliflower purée and some kind of strange but delicious black dust, and squid made to look like tagliatelle. After that, the serious business started with an endless stream of puddings - Nettle mousse and magnolia sorbet with strawberries, a sort of mousse/ice cream/tapioca combo flavoured like pina colada (yes, I have made that sound disgusting, it wasn't) and eight million petits fours in a two tiered box of goodness, including a magnificent tiny cheesecake dome with a base seemingly made of nothing but chilled peanut butter, passionfruit mousse, weeny chocolate fondant, cinnamon marshmallow.. Many things were made into ball shapes in hommage to the Atomium which was glistening on the horizon as if someone had polished it specially.
Occasionally someone would bombard us with a barrage of pointless factoids such as how many hours it took to install the non-cuboid Cube, the unwelcome fact that it is not secured in any way, just plonked on the top of the arch (lovely, thanks), how many layers of dusty municipal government had to be cleared before installation could even start, or even the weight of the table. Truly. At one point, the chef - who goes by the magnificent name of Bart de Pooter and who was very calm and jolly - appeared to tell us that the table was made of coriander. That seemed highly unlikely but I thought it unwise to challenge him. You all sit together at the same table, so it seems to have taken on a sort of higher significance for the staff. The staff had various exceptionally peculiar jobs to do, like snipping leaves from the vertical hanging display to make tisanes, or taking photographs of guests on Electrolux branded iPads.

I took my own blurry crap photo: 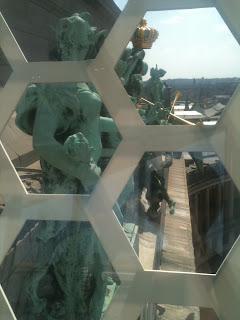 That was the view behind me, which made me feel a little bit queasy if I got too close, so I didn't.

It was all very pleasant and surreal (though unlike Simon, I did not get either to admire a luxuriant moustache, or eat a bird's nest full of smoke and rereading his account of lunch, it looks like he got considerably more food than we did, chiz), and I only dropped food down my front embarassingly once. I'd suggest you go, if you have a pet millionaire to stand you lunch, but one of the factoids they threw at us was that they currently have 1500 booking requests a day, so you'll have to have very fast fingers. The only real weirdness came from one of the 18 being a faintly crazed Belgian patriot, who kept haranguing all the non-Belgians to admit Belgium had the best food in the world. On the way out, I walked past her standing, admiring the view, chin thrown back in Belgian pride.
"Say what you like, he had vision!" she said, presumably referring to the lunatic ambitions of Léopold II the rapacious sociopath who oversaw its construction using money from his murderous rampages through the so-called "Congo Free State". Er, yes, quite, do go on revelling in his glories.
When I got home, I had a magnificent and entirely unrelated email, largely to do with cephalopods. It contained the following:
"I have a mortal terror of things with claws, possibly stemming from the fact that once when I was seven I came upon a tank containing a large, lumpy orange crab which was meditatively stuffing a smaller crab, headfirst and kicking furiously, into its mouth with both claws; or perhaps it was the Japanese spider crab, as tall as I was at the time, that indecently dropped its gill cover and began picking through its horrid circular gills in front of God and everybody"
There is nothing I do not love about that sentence.
Posted by Waffle at 19:36

It was ever so slightly like baby food, Mrs Osborn, but also quite delicious.

ELC - Quite possibly. What on earth is that anyway? Apparently it weighted 8000 million tonnes. I may paraphrase ever so slightly.

Also, look, my phrase of the evening appears to be "ever so slightly". I will go and hit myself over the head with a thesaurus until it stops.