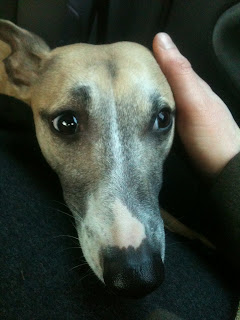 (This is also slightly like his Footlights headshot, I think. He could, indeed, use it to audition for Les Misérables, neatly squaring the circle, whatever the fuck that actually means).

2. Chekhov face
"What's the use of talking? You can see for yourself that this is a barbarous country; the people have no morals; and the boredom!" 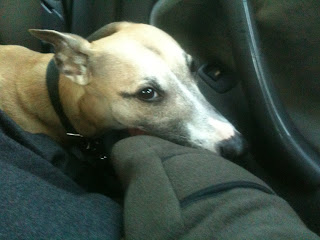 (He was in fact on his way to dog borstal during this heart-rending photoshoot. He had turned up the reproachometer to maximum, just in case I had a change of heart and smuggled him into my wheely suitcase). 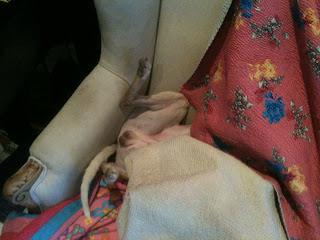 In the meantime, we are in London. I have already got into a squabble with a German man who called me an arsehole because he thought I was trying to hurry him off the train. I was probably actually rolling my eyes at my own children who have tragically become OUT OF TOWNERS. They have perfected the art of walking slowly across a mainline station concourse whilst looking slightly dazed AND getting stuck in tube barriers, then, to break my heart even more profoundly, Fingers sat on the Hammersmith & City line with a slightly supercilious expression and said "je préfère les trams de chez nous". I was rendered temporarily speechless and have had to bundle him straight onto the top deck of a Lahndan bus to try and rectify the damage. He remains unmoved. I am not sure what I still have in reserve, their entire plan for the next two days is "aller acheter les microbes" (buy plush bacteria, from the Natural History Museum). We are going to something at ExCel with Sir Waffle on Friday morning which sounds fun, even though for me, ExCel is irrevocably associated with my brief stint in the property law department of my erstwhile employers, hallowed be their Chambers Directory ratings, where I signally failed to deal with some tricky easements over a pylon in a barren corner of the ExCel site. The giant, cigarette paper thin plans I shoved guiltily in my desk drawers still come and rustle at me in recurrent nightmares.
In fact though, I have already struck holiday gold in the most unexpected way, and I think nothing will quite match up. Leading a reluctant constitutional around west London this afternoon, I realised we were very close to the fish pedicure place that I went to for Facegoop last year ; we took a detour so I could show them. It was love at first sight for Lashes, like a piscine thunderbolt. He stood, open mouthed and completely entranced at the sight and pleaded and pleaded with the single minded insanity that only an 8 year old can muster to be allowed to have his feet nibbled by small fish.
ING forgive me, I could not find it in my heart to say no, and I do not regret it for a second. If I am trying to rediscover tiny moments of pure joy, this was certainly one. They both did it, the ridiculous fish pedicure. Lashes had an expression of the most distilled, concentrated bliss throughout and Fingers laughed so hard on his precarious bucket perch that I was quite sure he would fall in. The Japanese lady on the front desk couldn't help giggling too. We all laughed and laughed as the sun set over the fleshpots of Notting Hill, and back in Square Marnix in Brussels, I don't suppose the ING were laughing much, but wotthehell. My children had a goddam fish pedicure. 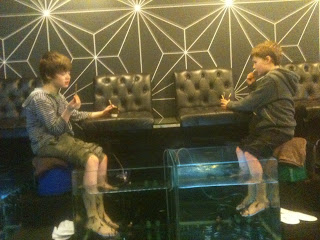 (at this point, you can see they had got beyond the AAAAAH FISH stage to the 'yeah, fish. But also: biscuits!' phase)
"I will ALWAYS remember this" said Lashes, reverently, towards the end. I think we all will.
Posted by Waffle at 22:32

Labels: Lovely London, Parenting, Shut up about your dog

I shall be in London too, tomorrow. I don't suppose we will bump into each other, unless you happen to be going to the launch party for a small book of poetry, in Brook Street. It seems frankly unlikely.

I really enjoyed your post. Weepette is adorable. Such range!

When will you be taking bookings?

Also, you may be the greatest mother ever for taking your kids for a fish pedicure. Fish pedicure is going to the top of my ratings list. Certainly beats my two fish related memories - winning goldfish at the funfair and then flushing Starsky and Hutch (as they became known) down the toilet a mere few days later after some over eager feeding of the fish flakes.

If I show that picture to my children, they will insist we become expatriates immediately. Well done, rule Britannia, God Save the Queen, and so forth...

You are a good mother.

Sonshine is also keen to give the fish pedicure thing a shot up in Glasgow.

I'm not sure. I've seen too many rank x-rated films where this sort of thing can get Out Of Hand.

The Weepette looks absolutely pathetic. You must have a heart of stone to refuse that wittle face anything its wee heart desires *smitten by whippet*

your last statement about the boys 'beyond fish, but also biscuits' had me howling with laughter. Perfect!

Have fun in Teh Lahndan!!!

Oh Lord, I am *weeping* with laughter - this is so utterly, utterly brilliant. I can just imagine how much F &L would enjoy the fish pedicure.xxxx

I've found a cool thing to do with jaded expatriate children is to take them to Yo! Sushi - where the food comes to you VIA A CONVEYOR BELT. I am sure the Japanese are horrified by it all, but my children go for the shock and awe reaction...

i miss my whippets- lovely but pathetic beasts they are- heart on sleeve they are. word veri is 'patzies' - how appropriate

Ro - HA, that is exactly what M, the brain twin said of that photo.

Z - I wish. Instead we are going from museum to museum and I am turning into my parents, fulminating that a piece of cake and a cup of tea can cost seven quid.

Tilia - I think I have a picture of his Madame Bovary face, actually, subtly different from the Bukowski.

Oh how lovely, that's the sort of parent I always thought I should be! Am still smiling about the weepette's euro-angst. J x

I'm sure you're going to tell us about it but having checked the website, science looks no sexier than it did 30 years ago. Just slightly more desperate.

What a fantastic treat! Feet eating fish plus microbes. Marvellous. If they like microbes then the Wellcome Collection often has deliciously medical exhibits. But the pain of becoming out of towners.

Can't imagine they'll want to see anything of the law bthe should that be their thing I'll be at the back of Court 73 tomorrow.

Betty! That sounds brilliant. Instead we are off to Excel. There will be a simulation of finding land mines. I'd rather be in Court 73, really.

Mountainear - I have to agree, the website is dire. I will let you know if the whole thing is similarly so. I have heard the words "ticker tape", "Brian Cox" and "chocolate Artesian wells" bandied around though, so it sounds, well, at least like it's trying..

Fish pedicure and biscuits! You are the best Mama of the World!

You are am awesome parent. What small boy wouldn't want to do something where fish nibble your feet?!

the settings alternative.Currently you could see content to your heart's delight. kodidownloadtv Search to the location of the deb file for kodi with the input data section.

Which we will discuss in this extremely area.There is a tutorial setting in WWE2K18 Before you go any type of even more, let me tell you that to mount.

This will certainly release the web Faucet on the Google logo design on top. https://frpbypass.me well as include a brand-new customer utilizing any kind of Google account.

This is so fun! What a great idea. Also I love how authentic you seem to be. Your style and passion for blogging is contagious. Thank you for sharing your life!