I am just sneaking in under the wire on the daily blogging thing today (and thank you so much for saying you are enjoying it, you are lovely). We have been out all day, and then I had a small quantity of wine and got involved in an incredibly lengthy discussion of taxidermy, because that's how we roll here in W8. I am lying in bed typing this, with my sacklike smock top (and possibly also my sacklike face, I have not checked) covered in melted cheap chocolate, stolen from children's Easter eggs that were entrusted to my safekeeping and which I have eaten. Plenty of time to replace them, Easter's not for months.
Today I skulked away into a dimly lit corner of the Natural History Museum while the children rampaged around with their pocket money (for which read 'money foraged from every surface in my house') and what happened? Lashes came back INSISTENT he must have what looked like an indistinct plush blob, one of the cuddly molecules he is currently obsessed with. I did not pay it much attention (I think my faculties melted down around the 700th interactive display. Honestly, what's wrong with a stuffed horse and a colouring sheet and, indeed, a shop selling nothing but tins of boiled sweets and souvenir pencils?) and shepherded him to the cash desk. I was thinking, with a high, to the point of obsessive, level of detail, about the precise composition of the cup of tea and cake combination I would choose when we got the hell out of there (lemon drizzle/builders, disappointing, but it hit the spot anyway. The spot is fairly large).
It was only when he asked me "c'est quoi, en fait, 'gonorrhea'?" that I realised exactly what he had bought. Another proud parenting moment. I would like to emphasise that we spent many hours looking at improving stuff in two museums. HOURS. I even found a dusty corridor full of decapitated birds to walk them along, bitching and saying their feet hurt: 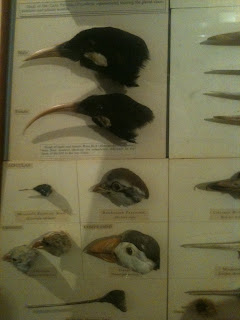 This one in particular is fucking FURIOUS about having its head cut off: 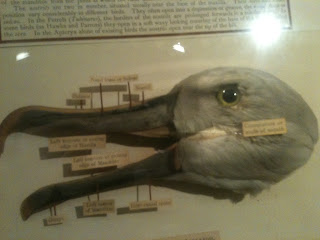 But even so, gonorrhea. I am going to have to creep upstairs with the kitchen scissors and take the label off.
Here. Gonorrhea. It's cuddling up to e-coli and, I think, a streptococcus. Can you guess which one it is? 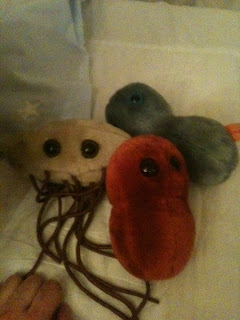 I had better sleep now, because science never does.
Posted by Waffle at 23:59

They do gonorrhea toys in museums? I don't quite know what to say, I'm so impressed.

When my son was 9, he won a bottle of whisky at his school fête (that would probably be on a par with a gonorrhea plush toy in a primary school nowadays). It was drunk and replaced many times before I presented him with it on his 18th birthday.

Brown one with the pili is E.coli, red is Streptococcus and last is the most evil gram postivie cocci out the Gonorrhea ~

...I'm a microbiologist I'm suppose to know these things.

Yes! You are quite right Aspasie! Brava!

Awesome post! God, all I ever had was teddy bears.

I think a shot of Penicillin is in order!

Would it be possible to make those germs in a "Build a Bear" shop? If so I would gladly sacrifice my rule of "no more stuffed animals in my house under pain of death" rule and totally go for it!

Who knew E coli was so cute?

And that bugs don't have whiskers, they have pili?

Glad you had an eventful visit! Had to check out the blog to find full details of the gonorrhea (toy) incident.

Here's a further suggestion for challenging questions from our online shop - http://ow.ly/4c9pG

please click and enjoy. i got these (in a heart shaped box, no less) for my boyfriend for valentine's day. because i don't love him enough to give him REAL std's.

Ohh I had a heart-stopping moment when I recognised the different beaks of the NZ huia (now extinct).
The male used his shorter, stronger beak to tear up rotten wood, and the female used her longer, slender beak to extract insects - perfect synergy.
In the wonderful new exhibition at Zealandia, there is a poignant display of a pair of taxidermied huia, with their song replicated by a man's whistle. He was recorded in 1960 using the call as used to hunt and find huia years earlier (they became extinct around 1913). This is the closest we have to a recording of the bird.

My cuddly MRSA has a CAPE. I believe I win :)

Is gonorrhoea the one with tentacles? I had to talk my 23 year old scientist friend out of buying these things.

Belgian Waffle, you are absolutely hilarious.
Is it very wrong that reading your posts is the highlight of my days? I know, I should probably get out more, etc.
Have a wonderful Friday! Looking forward to the next post :)

Waffle - brilliant! I feel your pain re the gonorrhea
thing.

When we were at the Nat History Museum, there was an exhibition about the human body. Sonshine loves all that sort of stuff and so we tagged along as he raced through the exhibits pushing buttons and twiddling switches (not actually stopping to see what anythign was supposed to do of course).

He then shuddered to a standstill in front of a life-size display of what can only be described as a sawn through pair of torsos (a male and a female) engrossed in what I shall describe as Congress. Although Hubby rushed to the scene and ushered him on quickly, Sonshine's little eyes were like saucers and I braced myself for a slew of hideously inappropriate questions.

But mercifully he fixated on a hugely magnified head louse instead.

Exactly, what's wrong with a stuffed horse? As a veteran of many Sunday afternoons spent fiddling with the ever-increasing amount of bells and whistles crowded into the 'toddler-friendly' section of Manchester Science and Industry Museum I'm not convinced by the value of all this well-meaning but undirected and chaotic interactivity. Tomorrow we're going to our favourite museum which is the defiantly 1970s style one on Oxford Road (its actually part of the university) with the stuffed penguins and live reptiles and Egyptian artefacts. Not an interactive button in sight but we can spend a good couple of happy hours in there,just wandering about and gazing at whatever takes our fancy (although mostly at the monitor lizards, who in return studiously ignore us, as if in solidarity with their host institution's Old School philosophy).