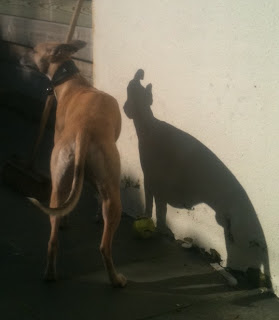 It would be pretty feeble to declare a brave new daily blogging regime and then fail on day 2, so here is a photograph of the dog. The sun is out and the dog has spent large swathes of the weekend doing this. Proper animal bliss; I would be doing exactly the same if it were two or three degrees warmer.
In other news (watch as I stretch the definition of that word far beyond any defensible boundaries), I travelled home on the tram tonight (after seeing these people, fun, but I was quite preoccupied with trying to work out whether the singer was Antony Hegarty or not. I am still not sure. Then there was an exciting beer based GIRL FIGHT and I lost my concentration entirely) with a gigantic old skool TV abandoned by a passenger, and a great deal of sand: 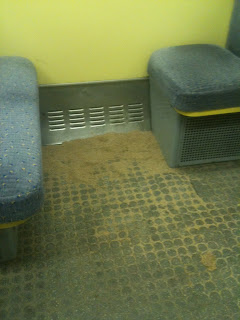 (Yes, I took a photograph of a pile of sand. Your point is?)
I also discovered an interesting Czech beverage called "coffin varnish", which may be responsible for the poor quality and tardiness of this post.
I am going to sleep, because I need to get Team Indifference to substitute holiday gulag early doors tomorrow with packed lunches and I do not even know where it is. If you are in Brussels this week (2% of you), I strongly recommend you go to some of these. They are taking place at Space Without History Man in a Box gallery, and who knows, there might even be coffin varnish.
Posted by Waffle at 23:56

I must have been a poor student as I had to wikipedia Belgium to find out if it has a beach! (should I be admitting that?)Apparently some of Belgium does so is that where the sand came from?!
Or is there a Belgian equivalent of Paris Plage that only comes out in sub zero temperatures?

Ha. Rhia, we have a beeeyootiful coastline, actually.

If you want cocktails or to stretch the coffin varnish to last longer - try mixing it with tonic. Makes a lovely drink.

Oooh, Sabina I really like the sound of that. Yes. Coffin varnish and tonic. It should have a wider audience really.