Brussels was looking nice yesterday. I felt like its patronising husband, or overbearing mother, walking around. "See? See how nice you can look when you make an effort?" 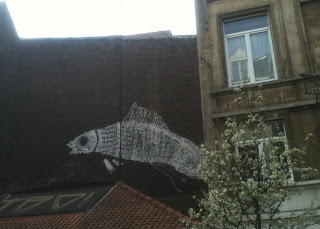 I had not spotted this fish before, though there is lots of fish grafitti generally. 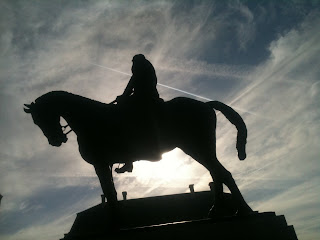 Léopold and his ridiculous rectangular beard were admiring the late afternoon sun. 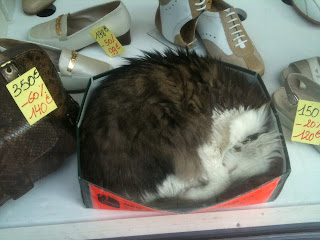 Cat in a box on the rue Blaes, where I was discovering the exceptionally well-hidden Institut Confucius, for obscure reasons that are continuing to erode my sanity. 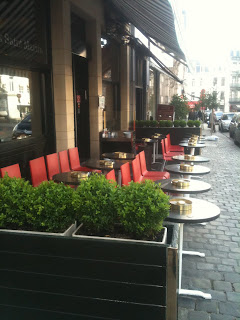 Le Vieux St Martin, Brussels's best café terrace, empty because it was in the shade. The opposite side of the Sablon was packed, but I still love the Vieux St Martin best, because it is perfect and you get a large palmier biscuit with your coffee and an opportunity to admire some of the most accomplished tweed wearers in the whole kingdom. 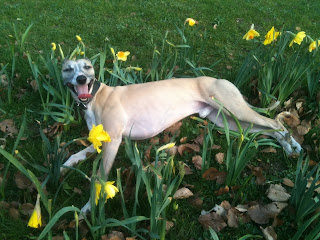 Oscar later assumed his favourite male centrefold pose in the park, crushing the municipal daffodils. He was exhausted by performing, for the first time this year, his Circuit of Shame. It goes like this:
1. Arrive in park. Bound up to gaggle of hair tossing teenage girls with your filthy ball and scatter them, screaming.
2. Run at full pelt through the wooded area, terrifying the lurking gangs of dope smokers.
3. Find a heavy petting couple and sniff insistently around them, refusing to leave.
4. Get over-excited around some small children and bounce about like a terrifying hound-marsupilami hybrid. Make one or more small children cry.
5. Shit at length, in full public view, surrounded by infants, right in the middle of the thoughtfully provided spring flowers.
6. Find something unpleasant to roll in - mud, fox shit, or alternatively jump in the pond, then shake yourself all over the hair-tossing teenage girls, making them scream again.
7. Pass out. Last year he performed the Circuit of Shame so enthusiastically on a hot day that he actually passed out and I had to carry him home.
I have nothing else for you today, I am accidentally hungover (the wine just FELL down my throat) and useless. I could say there'll be something better tomorrow, but it would be a lie. Presumably you are all keeping up with Antonia's joyous daily lent blogging? That, and constant checking on owlcam, are the only things keeping me going. There's something indescribably thrilling about the odd moments that maman owl looks towards the camera and you see her vast, owl eye that keeps me watching long swathes of motionless feather. She just did it! Just now!
What has kept you going this week, if anything? Do share it with the group..
Posted by Waffle at 18:44

The biggest bottle of Bombay London Dry Gin available (on sale! the highlight of my week actually), a three pound tub of peanut butter, and watching my sheepdog determinedly gnaw her way through a 14" rawhide.

I believe I spent my food money well this week.

Counting the days until I finish work. Forever! Mwahahahahaaaa. Well, for a bit, anyway.

Admiring my spring flowers in the garden - five daffodils, three hyacinths and a snakes head fritillary, so far.

Regular blog updates from people who are very good at it. That includes you. You're welcome.

Counting hours till husband returns from business trip to US so don't have to put all 3 kids to bed alone again. And not having to eat reheated mega Lasagne from Monday again as is now finished.

The grin on that dog is priceless!

Hee hee. I love the photo of a joyfully dissolute, shameful dog. And I am particularly delighted by items 5 and 7. It is vicarious dog owning at its best.

(VW sumetta: name of one of the adorable infants who witnessed #5)

The sun, three days in a row!
Dancing like a lunatic, with my three unhinged little boys, to "Wanna be starting something", several times.
That's all. Rest was crap.

That picture of Oscar is priceless. And I know what you mean -- I, too, am frequently the victim of wine falling down my throat. Happened on Monday. Tuesday was unpleasant.

I have got several events coming up where I will be required to do public speaking, at which I am shit. I am keeping the nerves at bay by becoming obsessed with a new diet and exercise regime (I have joined a gym! I am even going to it! 3 times a week!).
It's an ill wind, mind. The new regime is making me noticeably thinner and more toned (I am also becoming very boring, however).

Waffle!
That owlcam... Ooooohhhhh... It is mesmerising and strangely calming too. The way the sunlight is hitting its feathers makes it almost rainbow-coloured, like Funkadelic's George Clinton's crayola dreadlocks. It is simply beautiful.

This is why I NEVER let my whippet off the lead in town. Made me laugh though, reading about another sufferer.

Maker's Mark? Nah. Lorazepam? Oh please, you must be joking. What then? I'm just not frail enough to spontaneously combust? Much as I would like to faint in the park and have someone carry me home. No, it must be the story of a drunken Japanese guy (his nationality is quite coincidental, I assure you), told to me by a beloved college coed. Seems he was with 'friends' when he passed out, did they carry him home? No, they (of course!) shoved a live eel up his ass, where it proceeded to eat through his intestines. Why has this kept me going? Because every time I have to talk to someone that I shouldn't have to be talking to, I find a way to fit it into the conversation...changing the names to protect the innocent. Due to current realities, my imagination is a tad worse for wear, so the eel victim always ends up being the person I'm talking to.

Watching telly, internet, eating whatever got near me, drinking a lot of tea.

All of the chairs at your cafe st face the same way, and into the street. excellent for people watching, but do Belgians not talk to each other whilst they drink coffee? When I was a coffee shop worker(I am not going to say barista, Scottish people are not baristas, we make coffee and frown at you if you want anything complicated), they were very particular about chairs being opposite eachother.

I have been reading your blog for a while and so when I saw this YouTube video of a cute weird animal I thought of you http://mashable.com/2011/03/08/slow-loris-umbrella/. I hope you enjoy.

Keeping me going is Shark, who has developed an excellent evil laugh - BWOOOAAAHAHAHA - which she is using to good effect on the Hong Kong underground, where all the Asian girls are very, very, quiet.

I have been guzzling Cadbury's giant chocolate buttons. I didn't even stop when a 'friend' told me how many calories are in a packet - they are on special offer in both Tesco and Sainsburys, it would be criminal not to, really.
I love the picture of the Weepette!

I agree with everyone that the picture of Weepette is joyous. Actual joy. :D

Great picture of the dog, mine looks like that when we gave her the cork from a bottle of champagne to destroy.

I have started a new job with a classical music magazine, and I am not very good at it. What has been keeping me going over the last week has been the discovery that the history of classical music is full of people with quaintly ridiculous names - my favourite so far is Alma Mahler Gropius Werfel, which I chant over and over to myself whenever I start to feel a bit overwhelmed.

It snowed cruelly last week, so what's keeping me going is the thought that perhaps one day, I won't have to wear gloves.

Also, there's a new blended whisky on the market that mimics a whisky and ginger ale. I long to enjoy it in large quantities soon.

I used a fancy deodorant Downstairs and promptly gave myself thrush (Thursday). Did a jigsaw on Friday and put my back out so painfully that I had to lie on the flor and moan (still with jigsaw piece clutched in hand). Went to burlesque show on Saturday night complete with glittery handbag stuffed with canestan, pain-killers and hemorrhoid cream. It's not been a fucking great week to be honest.

I'm late to the party, but last week was only helped by spending my lunch money on fashion magazines and lip gloss.

Rain, Rain and more rain. Oh and celebrities filming in my small town.

The fact that you are not being paid large amounts for a syndicated column proves there is no justice in the world. Each time I look at this blog I am impressed again by your ability to produce effortlessly funny accounts of the most mundane events. And you have reminded me, in the nick of time, about why I don't want another dog. Thank you.

Zmck - Oh, thank you. I have just spotted this comment and am in one of my periodic (permanent) 'I am hopeless' phases and this was really cheering.