Well, it's been a right old couple of days -- few achievements, many minor disasters. The weepette had a tail accident, I got a puncture with the godalmighty Maserati I was test driving (a whole other story featuring my blank, utter terror at driving a gigantic piece of metal worth about 5 years income with my shonky driving skills and worse spatial awareness), and the oven fell off the four chipboard blocks upon which it was inexplicably balanced, narrowly missing me and buggering up my frying pan, which does not strike me as appropriate behaviour for an appliance named Competence Trophy. Oh yes, it's been heaps of fun.
However. There are several bright points, not all of them involving lying in the dark rocking backwards and forwards and eating Daim eggs.
Lashes, for instance, has, unprompted produced a Household Charter, like a UK government department ten years ago, full of unlikely to be fulfilled pledges and idiosyncratic spellings. French speakers will particularly enjoy (4). 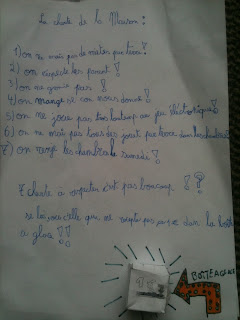 I'm not sure what (3) is supposed to be, my best guess is "grogne", as in complain, bitch, whine. If it also applies to me, I will definitely be the main contributor to the ice cream fine box. There has been some discussion about the size of the box for fines, but he claims he has measured it exactly to hold €5, enough for 2 double scoop ice creams. I am faintly concerned as to what can have prompted this, particularly taken in conjunction with his decision to put his pyjamas on at 5 this afternoon, and to request raw cauliflower for dinner. My best guess is that he has done something extravagantly terrible at school I don't know about yet. I am prepared for the worst.
The weepette tail incident was pitiful, pitiful. I did not see what happened, but heard him yipping in misery (we were in the parc du caca). After some discussion with the Portuguese woman with the giant Rottweiler, who thought it was his "bijoux", I realised his tail had gone all floppy and took him to the vet. The vet rarely disappoints. Today I was also party to a conversation where a woman revealed that she left her boyfriend because he was unwilling to accept her Pekinese's prostate problems. I live for this kind of thing. Apparently Barry - that's the Pekinese, not the boyfriend - has total urinary incontinence due to his prostate problem. The boyfriend knew when she moved in, but even so, it reached a point where he asked her to choose between him and Barry, and apparently, even though she was very much in love with him, there was no contest, it was Barry all the way. We all of us sat, rapt, listening to this tale: me with my broken tailed whippet, the man with the horse sized doberman with a stomach upset, and the woman with the geriatric husky that needed its thyroid function tested. There was a woman with a cat too, but she went outside to wait after Barry peed on her boot (I am not even joking, he really did).
The Pekinese was almost worth the €102 I was charged to find out my dog is stupid enough to sprain, but not to actually break, his tail in a feat of possible stick based idiocy. During all this time Oscar was unable to sit down and hovered uneasily an inch off the ground, the picture of whippety misery. Anyone who has ever bruised, or fractured a coccyx will know exactly how that feels, and as someone who has had the embarassing arse x-ray myself, I was sympathetic. Look, here is the offending appendage, floppy and useless (welcome, keyword searchers!): And here is the front end, quivering with pathos in the hope of gaining a pizza crust: 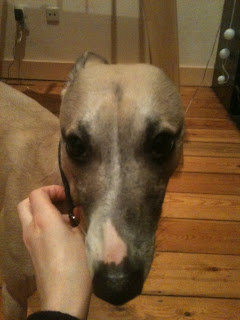 Apart from that, I have watched in growing disbelief as my neighbourhood proves that it is basically a small provincial town, as large groups of my neighbours have gathered to stare at holes in the road. Whenever I go past said holes there are at least 5 or 6 people looking at them attentively, as if they must contain the secrets of the universe. They are spoilt for choice at the moment as every day a new hole springs up somewhere in the immediate neighbourhood, none of us has a clue why, just the excitement of not knowing whether we will be able to get out to buy our crates of Jupiler and copies of Le Soir. Heady times of uncertainty in Uccle.
Also, this local window display pleases me: 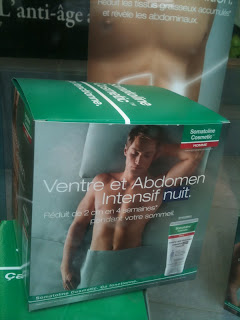 1. Why is green the universal colour of cellulite and fat fighting? How did this happen? Even the sleeping man's sheets are green. I'm not sure green has the necessary aggressivity to deal with my stubborn deposits. I want a black and silver cellulite product with white chevrons, please.

2. Are the men of Uccle particularly susceptible to chiselled chested pharmacy advertising? This is the first place I have seen the arrival of spring heralded by MALE cellulite product advertising. I welcome this equal opportunity body fascism, obviously.
3. Perhaps if the men of Uccle are very cellulite prone or merely very cellulite intolerant, they should consider a form of exercise other than standing and staring into holes? Nah, just kidding. Mes semblables, mes frères, let us celebrate our shared belief in the magical powers of seaweed based pomades by walking very slowly to the end of the street to buy an ice cream, then coming back to stare down some more holes.
Posted by Waffle at 20:02

My mother's idiot greyhound broke his tail and had to have a bit cut off - it's not an unfrequent occurrence apparently, as they're thin and whippy - the tails as well as the dog.

I like the rules and am inclined to apply them to myself, although I don't quite know and can't be arsed to look up what the first one means. Mites? Hm.

When my son was at university, he lived happily on the subsistence allowance of £5 a day we gave him. "Raw broccoli sandwiches are really good, mum," he said.

Z: HA. Our children are weird. Miets are "miettes" - crumbs.

My dog had this affliction! But in her case, it was from jumping into the river right after it thawed. The air was around 40 degrees Farenheit so god knows how cold the water was. The vet said this condition is known as "rudder tail" (because dogs use their tails to steer with when swimming) and also "broken wag." Very tragic. Apparently caused by swimming in a barely-thawed river.

Oh dear, it does sound as if there is something dire in the offing! There was nothing I dreaded more than my daughters appearing and uttering the terrifying word (sulkily) of "sorry".....

At least your children give you some warning behaviour. My Very Trying Child would show absolutely no hint that anything had happened, then I'd be gobsmacked at the next parent-teacher meeting when the transgression was revealed.

I have nothing else to say, other than the next WV was 'mingshin,' which sounds like some vile soppy spring weather-induced lower pantleg violation.

Poor weepette! I love the overheard conversation at the vets.

Perhaps I can be of assistance. The reason the oven was on cheesy blocks in the first place is because, well, people are idiots. No, no, don't try and talk me out of it, I will only drag you down with me.

One of the best parts of the day:
The moon over the (broken) tail end of the San Joaquin Valley, before getting to L.A. You needn't ask if the music was on loud enough to literally peel the skin off my face, as it is internationally acknowledged that I have little fear of never hearing another word. What's that you say? It's just the tequila talking? Hmm, that could be, surely it's either that, or me being just about to snap. On the other hand, if money talks, it seems only fair that alcoholic beverages from Mexico also have a voice.

Aw look at the doggie's sad wittle face. I do hope he got a crust at the end of the ordeal.

They are such fragile creatures - they look like delicate china. Albeit china that can fell a small boy with an over-enthusiastic jump.

Watch out too for mystery cuts from when he rolls himself in something caca in the parc du caca - my friend's whippets always end up cutting themselves on glass. But THAT parc du caca is in Kilmarnock which probably explains the glass.

How's the non-goverment coming along?

I particularly like the implied accidental pun in the 'you'll eat what you're given' rule: how about 'on mange ce que ce con nous donne?' when faced with an especially annoying waiter, sometime?

And poor Weepette. He looks so tragic. The personification of 'having one's tail between one's legs'. Though I do suspect the waiting room talk made it all worthwhile...

All I can think is I WANT TO TRY THE CELLULITE TREATMENT. even though i don't have cellulite. i have LONGED for this equality of access to idiocy for SO LONG.

off to look at holes.

i recently saw this exact same mens cellulite advert in france whilst visiting a friend and i cant explain why but i find it really foreboding. i dont know what of or why. oh the NSAs! Interestingly, I saw this advert in a pharmacie that still had a giant reindeer in its window!! this was February 14th! mid February.

Pretty please, for the uncouth among us who do not speak French, will you translate the sign? I could type it into Google I suppose ... but right now I'm more at the hole-standing level of energy.

"We don't put crumbs on the floor

We respect the parent

We eat what you give us

We don't play with electronic games for too long

We don't put all our toys on the bedroom floor

We tidy our bedrooms on Saturday

7 rules isn't many! Whoever doesn't respect them has to put €1 in the ice cream box!"

I hope he gets well soon!

"Mysterious" potholes are popping up in the roads around Leuven too, although the neighbors are staying firmly inside (too cold). Maybe they're some sort of urban crop circles? (Aliens at work???)