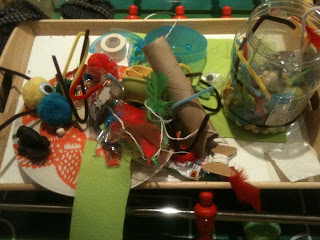 I was inveigled into facilitating acts of aggravated craft today, which always leaves me feeling .. well. There are a range of responses, actually, and usually a single session can produce all of them.
1. Smugness - Look how creative my children are. Look how totally laid back I am about the mess they are making as they sweetly create googly eyed monsters! Look what a gigantic stash of craft materials I have! Look, I'll make my own because I'm SO damn relaxed!
2. Control freakery - "Darling, that cardboard tube slide is never going to work if you balance it on the sheet of felt at that angle. Just give it here I'LL do it. Now pass me the red beads. No, not those ones, the smaller ones. And another 3 pipe cleaners. Just put your finger here and don't move. DO NOT TOUCH THAT!"
3. Foreboding - Are they ever going to stop? Do Fimo stains come out of Ikea pine? This is all costing me more than a family trip to Disneyland, isn't it? Oh crap, is that a packet of Satan's dandruff (glitter) I see clasped in a claggy hand?
4. Irritation - Ok, there's really NO need for that many google eyes on one pompom. I don't CARE if it's a spider, can't you go and watch tv like normal children, godalmighty. I mean, pipe cleaners? The clue is in the name, kids, pipe cleaners have no place in 2011. We only played with them when I was little because Nintendo hadn't been invented, you utter clots.
5. Shame. I am in fact an uptight, killjoy, arse. Not only that, but my pom pom monster is shit, far worse than theirs.
6. Resignation - Fine, whatever, sure, stick eyes on all the cutlery and my phone and the dog's arse. Sprinkle glitter into my cup of tea, and use my Wolfords for monster sleeping bags. I am just going to put my head down here on this slightly sticky corner of the table. Wake me up when it's over. Or, if you are a dog, hide under a blanket and stay verry verry still until it's all over and the tuneless, soul-sapping bleeping of Mario lets you know the coast is clear. 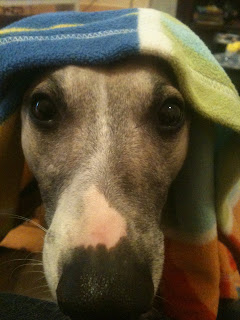 Sssssh.
(The dog is slightly less folorn than yesterday, weepette watchers, though he still has the pained expression of one who would be more at ease sitting on an inflatable rubber doughnut).
I am working on a patented Beddington formula to define the tipping point into parental meltdown on any given craft project, but it needs refining. I also need to work on The Immutable Rules of Craft (such as 'the lid is gone and it is never coming back. Do not even bother looking for it', 'whatever scrap of tat you throw away will be instantly needed and irreplaceable', and 'if it's wet or stainy, it's already all over your tax return'). If anyone has made a breakthrough with this, I would love to hear it.
Posted by Waffle at 22:40

No breakthrough. My older son is 16, and I still find things I thought would be good for 'craft' that I have been saving since he was a pre-schooler... because you never know....sigh. And I made sushi last weekend - at home - because the little one wanted to 'cook' his favourite food...so it doesn't go away - just 'craft' changes what you have to do...

ps should you ever try to make sushi at home, read the instructions properly first, and wet your fingers before you try and manipulate the rice - then you will keep seperate fingers instead of ending up with a sort of ineffectual paddle thing at the end of you arm...

I see your traumatised glittery dog, and raise you a set of utterly ruined tie dyed bedding.

We ROCK at craft.

This is so spot on. I love the Satan's dandruff reference.
My only rule is I must have had coffee first. One too many creative disasters at 8am...

we had a "ceramic hell" shelf for the kids' pottery ash trays and mugs (all we had to work with in iowa was mud or clay).

three cheers for you for doing all that. "satan's dandruff"--ha!

I need to look around in the 'homemade' closets (thanks for nothing Europe), and sift through an embarrassingly large stash of craft materials (though some require bandsaws and disc sanders...not so good for kids). Embarrassing, as there are no children around to explain their presence. You should have them, though I'd have to keep the pipe cleaners (again, embarrassing).

Disturbing WV (if one is into animal husbandry)--unestris.
Nowhere near as disturbing as B. off to look at holes, though.

At least you are doing crafts! I wage war inflicted. I raise you this parenting fail. My lot are in a deeply urban playground snacking on Coke, crisps, over sweetened cereal bars and a tangerine each. Near us is a picnic blanket with pitta, hummous, veg sticks etc. waytomake the other parents feel inadequate.

this house is layered in craft shit. all fairy/horse/fish related. no.6 i would call not resignation, but 'paying the price for independence'. you have independent children mme waffle! celebrate! hurrah! blockade one room and tell them if any craft item comes there, you will destroy the planet. simple. there is a price to independence, just how much does anyone want to pay?

(you can see - craft/madness - it's all the same knife edge now.)

the word verification 'pylarsit' sounds like a drunk trying to utter 'pile of shit' no?

Ah, yes. And those little bobble pom-pom things repel glue and stick to Nothing At All until you give up and walk away - at which point, they become grafted to you for life.

And whenever I join him at the play-doh, he always steals whatever it is I'M working on, and wrecks it. And then wants the second piece I've started on while he was wrecking the first piece. Etc. Pisses me off no end.

Laughed out loud several times during this, especially 'you utter sots.' Don't think it fair that the Weepette is on its own in all of this. But still, hilarious. NO ONE ELSE admits to all of this. Brilliance!

You are the Elisabeth Kubler-Ross of crafting.

I never comment, but as I am reading your blog instead of cleaning up the glitter-glue splotches all over my kitchen table, I thought I should make an exception.

We were all crafty kids but my mother drew the line at one thing: glitter. There was NO GLITTER ALLOWED AT ANY TIME in our house. Not in a PEN, not in GLUE, not in ANY FORM AT ALL. I think it saved her sanity, because now she's doing craft with the grandkids!

You can easily apply this stress'o'meter to teaching cooking, which I will NOT do, and their GCSE art exam which I most defiantly AM taking a very hands on approach to. I find it so very stressful doing anything creative not least because having done all bloody day why would I go home and do it?

I love this, especially the "smugness." I know a lot of smug, crafting parents--the ones who do all their children's school projects for them and the teachers are totally fooled.

I think my son will end up seeing a therapist because of the time we tried to make snow globes.

I have just stumbled on to this --- for someone who has loved all typies of craft, but has no time time, as have to clean, cook and look after guests in a small bush pub in the never-never, this makes my day reading all the comments when I can sit down. GREAT!!!