I had to drive another expensive car yesterday and am still frozen in a rictus of terror. My jaw is wound so tightly that, rather like the lobster we saw on the Isle of Wight last summer, I could snap a biro in a nanosecond (with my teeth, that is, if you could prise them apart. With the lobster it was its claw, obviously. Lobsters don't have teeth. Or perhaps they do. Anyway, I know what I was trying to do with that simile and it worked in my head, so let's move on).
I know this sounds like one of those pinching diamond shoes type complaints, I do. I know many people would love to do this, but most of them - am I gender stereotyping? Somewhere in gender neutral, secular heaven (where they are serving Chablis and chips and there is a gigantic Jaeger), my mother is furious with me, but then she couldn't drive - are men and thus not reading this weblog. I do not love it. I like writing about cars, it is amusing and I am extravagantly grateful that someone is kind enough to pay me to do so. But the big expensive ones, the ones that cost more than a racehorse, or a flat, or a flat with a racehorse in it, wearing caviar hoof oil and eating diamonds, scare me to death. I am fast discovering that driving big expensive cars that go VROOM when your foot slips is a job I am even worse at than being a corporate lawyer, and that's saying something. When you drive a massive expensive car, I have also discovered, they make you sign a release form. The first time I signed a release form, it was in Dutch so I had no idea what I was signing. I think it was best that way. The second time, today, I have discovered that I have warranted to drive "en bon père de famille". I swear. The actual form, that I actually signed, has me stating that I will drive like a "good father", look: 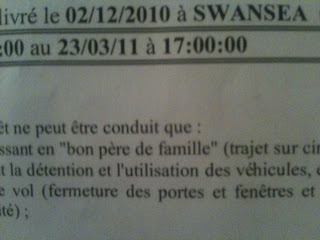 (I have just consulted a francophone and apparently this is a standard clause. Like the man on the Clapham omnibus, or the reasonable bystander. I love it.)
I doubt that bon pères de famille deal with narrow roads in racehorse cars by shouting OH GOD OH GOD OH GOD I DON'T KNOW IF THERE'S SPACE OH GOD, PLEASE LET IT BE OK and gripping the steering wheel in their sweaty palms in abject terror as they lurk in a lay by until there is no traffic left at all. Or declare the acceleration "scary" and stay in the slow lane all the way round the ringroad. Or fail to discover how to open the boot. That said, I am at least exceedingly safe since I get palpitations over 110km/h, so in that respect if no other, I am indeed a VERY good father to the racehorse car.
Anyway, I did not break it, the sun was shining, it had some kind of sci-fi camera to show you how to park, and I had coffee on the Place du Grand Sablon where one of the cafés has installed some sort of white leather benches which are delightfully vulgar, so I sat on one. All the men were channelling Bernard Henri Levi (giant hair and shirts open to the point of risking hypothermia) and the women either Carla Bruni or La Cicciolina and everyone stared at the monster racehorse car with naked envy. Given another five years and someone else's brain, I could probably have almost enjoyed it. I did like the GPS which would only direct you to beer and dollars: 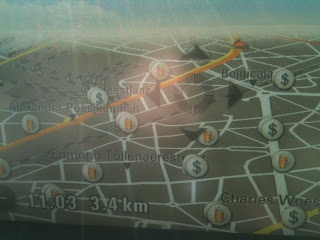 Pleasingly Grand Theft Auto.
Also, it had "porte-gobelets escamotables" (removable cup holders) which is (a) a fabulously complex expression, and (b) entirely without use. Also, they looked faintly sinister and medical, like so: 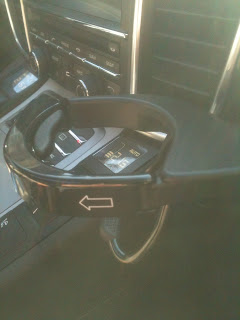 Enough luxury complaints. I did get hit on the head by a bottle of Dr Hauschka bath oil this morning, but that's more of a middle class injury. I am going to investigate the massive protests taking place in Brussels today. So far, I have a report from Schuman that "the protesters are already taking up every terrasse seat in every café for miles". It sounds like my kind of protest.
Posted by Waffle at 11:27

Look forward to reading your review... Will you mention the stirrups/cupholders? I wonder...

I'm a bloke and I love your blog. At the risk of turning you into Jeremy Clarkson, or worse that small overly groomed fellow, what was the Panamera like then?

I believe that cupholder is known in the trade as an "Abu Hamza." Or maybe it isn't.

You paint such a vivid picture that now I'm yearning for you to feature on "Top Gear", as the everywoman opposite viewpoint to the car-mad fanatics usually interviewed.
If only there was a secret camera mounted in the dashboard, and perhaps your lovely hair, to record the envious glances at the cafe...
Heather (NZ)

Just back from Schuman area myself - not a protester in site and roads empty. Perfect day for a walk in the sunshine - I am thinking of requesting one day a week like this - it's when the farmers revolt and block the roads with tractors I start to get testy (I rather liked the Flanders News report which declared traffic was not so bad because 'commuters had taken their precautions' http://www.deredactie.be/cm/vrtnieuws.english/news/110324_demos_Brussels_unions)

Is the Tea House still there just off the Place du Grand Sablon? We stayed ages drinking a whole pot of tea each and eating delicious rare roast beef and salad when we'd been freezing cold.

Unless there's a Place du Petit Sablon too, and that's where I'm thinking of. Anyway, until then I had pretty well stuck with Earl Grey and Lapsang with the occasional foray into Jasmine, but it opened my eyes.

did your rental contract on your house not also require you to be a good father? I had a massive feminist rant at my landlord's secretary when we were signing our contract. She looked really uncomfortable. Then I ranted at some Belgians and they thought I was mad. Finally someone explained that its standard here and not some patriarchal conspiracy although i still have my doubts.

Ha ha! This post was full of metaphorical gems but "a flat with a racehorse in it, wearing caviar hoof oil and eating diamonds" was one of my favorite not-so-metaphorical. I can precisely imagine the terror since I am a fearful driver even in bourgeois cars. And I loved the description of your furious mom in heaven. How did you end up writing about cars anyway?

Well, regardless, thank you for this most excellent post.

Paola - THANK YOU. I'm not imagining it then.

Espen - Meh. It was like driving a gigantic, cumbersome boat. Full of furious wasps. (Ed's note: I cannot drive a boat).

Z - Yes, still there. I've never been, it looks really twee, but if you say it's decent I will check it out, I like the sound of rare roast beef..

Anon - No! My contract does not contain this gem! I am fascinated that it is common usage and I still blame the patriarchy.

Laurel - Your guess is as good as mine. It can't possibly last..

I have been enjoying your blog for a year or so and this made me come out of "lurkdom". As a Flemish female lawyer working in Brussels for a UK firm, I should probably warn you that a "bon père de famille" is a little more than a reasonable bystander. In Dutch we speak of "een goede huisvader". (again the father figure) Napoleon left us with a very male-oriented civil code...

I had to actually scratch out and revise the gender on paperwork to wed my spouse in Germany, all under the watchful eye (and forced, ecclesiastical smile) of a pasty-faced, fat-handed GW Bush appointee in Germany. Trust me, he was the one who felt uncomfortable.

WV undstic
Reminds me vaguely of a working girl I once knew from Hamburg, nicest person I've ever met, one would never guess her specialty.

Current status: still trying desperately to keep it together, until I am back within the jurisdiction of a country whose jails do not end up all over National Geographic. There was a brief moment yesterday when rocking back and forth seemed very alluring.

Fascinated by the editorial mind who decided to terrify you so regularly with fast car assignments. Even more fascinated by the commenter who could identify the car from the cupholder!

Why do European cars always have such flimsy looking cup holders? Is if because you don't have 7-Elevens? I cannot imagine that your luxury motor car's cup holder could support a Slurpee.

It was a long time ago, twelve years or so and it was warm which, since the wind was freezing and I was colder than I ever remember being in early December (we went to the cinema every afternoon just to warm up) might be tinting my memory a bit as I don't recall tweeness, but the tea is certainly delicious.

I too would like to hear the story of how you won the "writing about scary posh cars" gig.

Also, bonne pere de famille - that's surely from roman law, innit? Bonus pater familias. But, bet the romans did have to account for the male midlife crisis. I think your version is much safer.

Oi..I'm a bloke (or at least, I was last time I looked) and I wait with the impatience of a three-year-old for every word that drops from your pen. Or word processor. Whatever.

Some years ago a barrister friend notified me of the sad demise of both the Man (or Woman) on the Clapham omnibus and the Reasonable Bystander. In these litigious times they have both been reduced to the level of blind, deaf, illiterate and suicidal halfwits.