I got sucked into a black hole of childcare and general incompetence in the second half of last week. I don't even know why I didn't get around to writing anything. I do know the whole week came to a head today with a game of battleships so protracted I think I aged fifteen years in the course of it. I didn't think anything could be worse than Monopoly, but it turns out that battleships with:
1 incredibly easily distracted and slapdash child;
1 incredibly precise and minutely careful - not to mention easily angered - child. Who, it later transpires, is crucially still a little hazy on the distinction between 'G' and 'J';
1 very tired, numerically inept adult who nevertheless has a stubborn belief that things should Be Done Right
is in fact worse than Monopoly. Truefact. It is probably no coincidence that the day ended with someone getting stabbed with a giant, sharpened wooden stick in the zizi and the whole household being put unceremoniously to bed. Well, not me, sadly. I wish someone could put me unceremoniously to bed, but instead I am arsing around making stupid amendments to documents, picking up marbles (which are dotted around the house in extraordinary numbers, considering I have never, but never, seen the boys make any attempt play with them) and trying to play Adele songs on the piano holding the soft pedal down so as not to anger the neigbours, whilst intermittently watching Isabella Rosselini in red spandex talking about bed bug penises (amazing, essential viewing, thank you Mr Houser).
What DID I do,exactly? Perhaps better not to dwell, I mean, I know I was working, but god knows what on. I check my phone for clues, but all I could find were these photos, which actually seem like an extraordinarily accurate representation of the inside of my head. 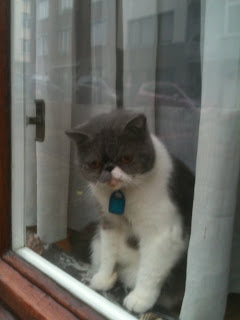 This is Brussels's very own LOLcat. I spotted him looking mournfully out of the window on a grey day last week. 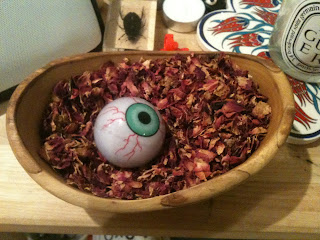 I discovered this tableaux vivant on the sideboard one morning last week. It is still undisturbed. Perfectly charming. 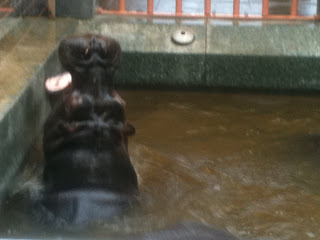 We spent a long time in the hippo house at Antwerp zoo on Saturday. Mainly because it was raining. The hippos were exceptionally noisy, in an impressive, but ultimately repetitive sort of way. They were - and this is a technical term - fucking huge. 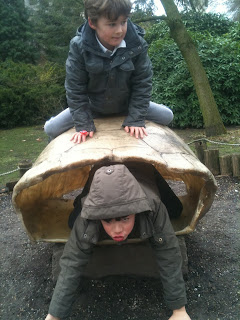 I do not think this requires commentary. 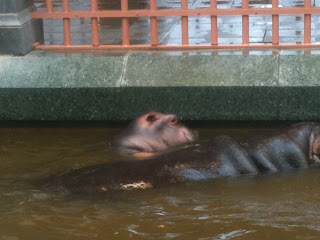 This is the baby hippo, Lambrini (I swear. It sounds like one of Jordan's children). The baby hippo has PINK FEET. We saw them for about a minute, when baby hippo stood on mama hippo in a fit of youthful hippopotamus high jinks and kicked her hard with its adorable pink hooves. I felt a pang for mama hippo, I'll admit it. 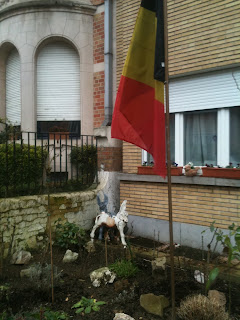 I love this garden, which is very near me. Dilapidated wooden donkeys, check. Belgian flag, flying low, check. Rockery, check.
I am not even going to pretend for a second this week will be better: it won't. I mean, look, it's midnight already and I still want to watch Isabella being a mackerel. What have you been up to, mes petits choux?
Posted by Waffle at 00:07

The photo of your children on the tortoise thing is priceless. This week I have

-worked (and they for been thrown up on by a bay)
-eaten alot of chocolate
-spend Saturday having tea and cake and then A LOT of gin in Edinburgh, culminating in me missing the direct bus home and have to swap at Broxden Park and Ride (in the middle of nowhere, at midnight, just outside Perth). I survived that and got home, and then did my ankle in when i missed a step in the close my flat is in (there are no working lights, plus gin).

Today I mostly ate cake. This is as exciting as my life gets.

*and therefore been thrown up on by a baby

This week I bought my first ever apartment with my husband! And then he got laid off!* And now our current fridge "sounds like an airplane"!

Sadly, I have not been able to medicate any of these happy, stressful, or expensive situations with big buckets o' booze because my doctor has me on some new prescription regime. Not regimen, regime: it is like a tiny Stalin is inside me screaming at my organs and sending troops to interrogate and torture my GI system, which is unpleasant and makes me want to sleep 15 hours a night.

But no one threw up on me or made me play Battleship, so it wasn't such a bad week, all in all.

*Anticipated and planned for. But I can't resist a dramatic announcement.

This week I have visited a supposedly 'tropical' island called Batam near to where I live in Singapore. It mainly consisted of rusty buildings, middle aged British men and their much younger 'companions'. A holiday is never good when the most commonly used phrase is 'shit hole', you book an early ferry home and the most positive thing your husband can find to say is 'at least it didn't rain'.

We used to call Monopoly "MONOTONY".

On Saturday I went to a convention in Ostend where a brilliantly funny speaker from Germany described certain meetings as BMW -- "bitchin', moaning and whining". (When car-obsessed daughter, then 3, asked what those initials meant, she was told "big mangy warthog".)
I also ate three desserts in two days, my new "diet" plan to lose weight (oh yeah!).

This week I watched friends and relatives come perilously close to floods, cyclones and bushfires (anyone planning a holiday in Australia?). And helped the kids clean up their rooms. Natural disasters sound like much more fun than their rooms ...

I spent most of my week sitting on headset, at serious risk of hypothermia backstage in a theatre staffed by the most mournful/sarcastic techs on the planet. It was like being held captive in the Theatre of the Damned. Thank God the run is over.

On Saturday I finally had time to clean up my living room and transform it from a props workshop into an actual sitting room/lounge-type room that an adult would actually be able to enjoy sitting in, which has been overdue for many weeks.

Am now hunkered down in said living room grateful that the production is over and I can return to my usual MO of living on the interwebs.

I spent the weekend staying in a pigsty. Not the usual pigsty, but a tastefully renovated four-star pigsty.

WV is 'flatoo'. I think somebody is having a laugh.

This week I have:

....continued to nurse my toothache, putting off yet another visit up the M8 to visit the dentist.

....had the Meerkat over for a sleepover. I fell asleep before the two small boys did.

....Managed to submit one invoice for website work done.

....Drink all the cider in the house (see: Toothache)

I'll tell you what's worse than battleships or monotony. A LEGO board game. Maybe we're just not playing it right. I am too grumpy to read the instructions ;)

What's with all the Monopoly hate? I loved Monopoly--we used to have ruthless, weeklong games during the summer when we were kids. However, if you have the need to bleed from the eyes with boredom, go get yourself Candyland. Sweet mother of God, that game is the most tedious thing ever invented.

Any board games with children make me want to poke hot sticks in my eyes. Or in the eyes of the children if they are winning.

Last week was spent doing everything but the job that I was supposed to be working on and as it is due on Friday this week will be spent in a screaming panic. Yay.

Love the hippo. Do you think they get to play battleships too?

Have you seen Isabella as dolphin? Or humping the cardboard lobster? Must. See.

In our house it is pennies that are all over the house, not marbles.
This week I

Bought him an order of dumplings to make up for it

I couldn't make out the baby hippo, so this week I will be going to the opticians. This week I have also:
- wiped the little one's nose approx 4000 times,
- had 10 children aged 4-6 in my house at the same time, eating cake,
- cleaned, lots, and
- picked up around 100 marbles - they are everywhere! How does this happen?
- re-started my blog.

I very much like the BMW meetings and will shamelessly steal this when I go back to work - thanks!

This week I have driven from Colorado to California with my fiancé. Unpacked heaps of boxes. Swept, mopped, dusted, and best of all cleaned not one, but two of the filthiest bathrooms I have ever seen in my life. There's nothing like moving to a strange city, with no job (or prospects really) and cleaning strangers' piss and shit off 1980's style blue tiles. Epic week really.

Last week was so bad with four sick kids, Monopoly was the highlight of the week - honestly! This week is shaping up to be even worse as I'm the sick one now.

Thanks for the battleship warning - kids currently in a monopoly 'love fest', it is more than I can bear! However trialed a game given out on a course at work, with the family at the weekend. It's called 'The nurturing game', is so incredibly awful, if anyone ever approaches you to play it - run, fast, get away, take no part!

this week i had another chinese security guard called to me. this time to remove my shopping bag from me in case i felt the urge to shoplift a dried fish. shoplifting in china is probably punishable by death, so i let him have it, along with an english tongue lashing that became more descriptive as i grew increasingly confident that he didn't understand a word i said.

well its funny you should ask cos my week started stupendously crappily. It involved a MASSIVE argument with a shopkeeper at a mobile phone shop who (without recounting the whole stupid story) ripped me off ten euros. I said I wanted the moneyz back and was told that "I wasnt being very nice!" and I should be glad to be getting the "present" of ten euros phone credit which I shant use. Theres very little more insulting than being told something is a present when you know full well you've paid for it. Grr.
Then the follow on bad mood made me have a go at my boss just before she was due to write my character reference! oopsy.
BUT good news, I had lots of translation work and im going on the night bus tomoro to Paris Wooop!
- Rhia

I didn't kill my husband. Have you heard anything lately from our friend with the husband with the friends? Tips, maybe?