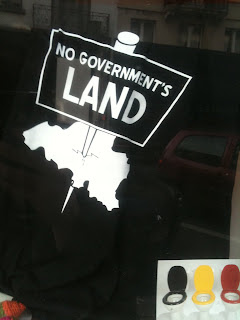 "Do not", someone said plaintively on the last post "go away for so long again in February, the month of Beelzebub". But of course, February being the month of Beelzebub I did and I am very sorry. You are less neglected than, say the house or the dog, if it's any consolation. The children are ok, because they can reach the cupboards and have opposable thumbs.
It's been a strange week, including for my beloved Belgium. When is it not a strange week for Belgium, one might ask with some justification, but this week was a corker. We beat Iraq's "no government" record, effortlessly gliding past 249 days of farcical constitutional paralysis, and celebrated with, uh, nothing really. Some people in Ghent took their clothes off and there was a low key Frite Revolution in Brussels. The postal services and my cherished Brussels public transport operatives at the STIB went on strike in a helpful, totally unrelated fashion, just in case anyone had a residual impression that public services might be functional. The transport strike was particularly precious, since it was a walk out in response to an act of aggression against a metro driver. So far, so laudable. Sadly, it later transpired that the metro driver in question had thrown the first punch, and the whole incident had degenerated into a twenty minute brawl. I find myself wondering how he feels about the whole thing: righteously indignant, or a tiny bit sheepish?
Back on the domestic front, Fingers has been sneaking into my bed at six every morning to intone gravely in my ear how many days it is until his birthday (eleven). I think if you asked him how many days it is until his 23rd birthday he could probably tell you at this point, so fixated is he upon it. They are a strange combination of things, these wake up calls. Firstly, it is rather nice on an animal level, because he is irresistible, particularly when he is being so serious, and he will hold my creased, puffy face in his small cool hands as he tells me the present state of his party guest list, and that is very pleasing. But of course, it is 6am, and I have been gnawing a bald patch in my fur (thank you Antonia) until the early hours worrying about laughably tiny things in the grand scheme of things and 6am - even without the gnawing and worrying - is Too Bloody Early. Then on top of that there is the guilt that falls on me like a cartoon grand piano at 6:03 each morning because I have not done a damn thing about this mythic party, even though he seems to have drawn up a table plan, menu and order of ceremonies in triplicate in his mysterious small head.
So it came to pass that I finally knuckled down this evening and signed over 3 years income to "Stardust Park" for 3 hours running around a poorly lit hangar staffed by dead eyed teenagers on day release from Forest Prison, 1 fun sized packet of Haribo per guest included. He initially took the news with calm acceptance of one who knows it is only his due, but when it got to the bit where I printed off the invitations and he got to stick stickers on the envelopes he got quite giddily thrilled, so I felt I had done a good thing and we can move on to the ceremonial studying of the Women's Weekly Birthday Cake Book.
Apart from this rudimentary act of parenting, my high point of the week was probably doing this gentleman's make up. 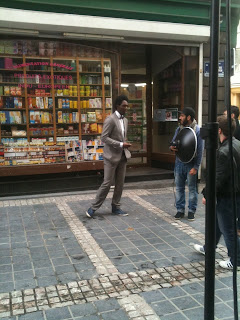 You may be thinking that I am not a make up artist, I certainly know I'm not a make up artist, my face testifies that I am not a make up artist. Even so, Baloji had been told that I was going to do his make up. So I did. Well, I patted around his face ineffectually with a sponge, trying to look professional. Occasionally someone would say "how's the make up?" and I would purse my lips and frown and say "I think it's holding up", without actually having a clue. It didn't matter much thankfully, because he'd look amazing even if you dressed him up as Bart de Wever. I've already bored everyone I know rigid with my borderline creepy admiration for him but I'm sorry, he's fucking brilliant (nothing like Jessie J, that was weird) and he's coming to the UK in July so you can expect me to harangue you further about going to see him if you live there.
The standards, they are a-slippin'
A series of things I have got wrong in my last two posts:
- apparently lorries don't weigh 500 tonnes. Eh. How much is a tonne anyway?
- Mistakenly described chlamydia as " a molecule" and not a bacterium. My father would be so proud (though, as my friend R wisely observed "I'm sure he'd be proud you were talking about chlamydia online regardless").
- "Jurk" is a dress, not a skirt.
- I used the word "snoek" (meaning pike) instead of "snoet" (meaning face). Which I sort of like.
Please continue to be vigilant with my factual, spelling and grammatical errors, I approve. I will be over here drooling gently and bringing shame upon the sciencier members of my family.
No, sciencier is not a word. Shut up now.
Posted by Waffle at 23:01

It's been a fabulous day for headlines thanks to your constitutional crisis, so many "Belgian waffling" references! (I've lost track--have you caught up to Iraq yet?)

The Globe and Mail (in Canada) had an article that Belgium was "celebrating" 249 days without a government:

It is quite unbelievable, really. We had a total freak-out when the Prime Minister prorogued parliament (rightly so, I thought) for three months.

Baloji eh? Great song, though I don't understand french. No matter, thanks for the introduction.

They were passing out free frites in Leuven and...I MISSED it!
Damn, and I used to be "up" on the news....
If someone gives Yves Leterme yet another goat I think I'll....

Pat (in Belgium, sulking a little)

I wonder if anyone would mind/notice if we didn't have a government over here in BlightedLand? You can have ours if you really want one, but I'd advise you to keep a close eye on them if you own any trees.

I don't see the problem with substituting 'snoek' for 'snoet.' Granted, I don't speak Belgian or Flemish or anything but English really (and the jury has found against me on that front on occasion), but I personally know several individuals with very snoek-like snoets. Such as to make the terms interchangeable, really.

Many years ago when we took the brats to EuroDisney there was a strike on the Metro/RER - the trains ran but no one manned the stations so no one paid - win, win! The strike was called because a member of staff had been found unconscious in his station and was thought to have been attacked by a member of the public. The union bigged it up. Then it turned out he had had a heart attack.

"sciencier" is perfectly fine. don't worry about it. anyone who can read knows what you're trying to say.

I'm sorry, Waffle, but you can't talk about your Goverment (even the lack of it) without some chicons to illustrate it.

When are you all going to migrate to the main square and incite revolution?

I cannot wait for the birthday party blog :-D

saw an aye aye on david attenborough's madagascar. thought of you.

Can you send me some fun-sized Haribo too for my birthday? I think it's only fair in the circumstances. Not sure what they are, but it's always fair in them.

Like most Americans, I am shamefully ignorant about Belgium, so thanks for the peek into its troubles.

My son's twelfth birthday party is tomorrow. I allowed him to plan it for a day on which I will be at work for 12 hours and my husband will have to supervise the whole thing. By the time I get home, my house being taken over by a group of skateboarding tween boys will be only a recent memory.

A tonne is like a ton, only smaller. Or bigger. (Depends on whether it is a good old British Long Ton, or the degenerate American Short Ton). All clear now?

The feature that debuted in the Apple Watch and the latest Macbooks may also find its way into the iPhone 6S. Force Touch technology enables a touchscreen or trackpad to detect the difference between a light tap and hard press.

Interesting post! This is really helpful for me. I like it! Thanks for sharing!
microsoft office online

I found a lot of interesting information here. A really good post, very thankful and hopeful that you will write many more posts like this one.