I developed a peculiar fear of the internet over the weekend as part of a minor attack of The Mentals, as if the internet might crawl out through my keyboard during the night and destroy me, the same way my mother used to unplug everything, but everything, at night in case The Electricity escaped through the plug and set fire to her house. Thankfully it has worn off.
Actually, it was nothing like that really, I am being fanciful. I was experiencing severe anxiety, most of it unrelated to the internet and mild paranoia (which was), not an extended hallucination featuring internet gremlins. Oh dear, I'm not making this sound any, better am I? I'M FINE. The above is all exaggeration. Actually, you can see in the very existence of this disclaimer that the paranoia has not quite worn off, I am still worried about the impact anything I say on the internet may have on some unspecified future scenario that I cannot even begin to imagine.
The thing is, I am not actually sure what proportion of the internet is videos of frisky bear cubs and lovely chat about people's favourite kinds of cheap chocolate, and what proportion is dead eyed trolling and chilling lunacy, but at some point in the last week the entirely fictitious proportions I keep in my head as reassurance got dislodged. I think it was because I was writing a piece on this kind of online profile stuff, and whenever I do that I begin to see terrible pitfalls in the most innocuous statements. I have confessed to using Dr Oetker's pancake mix (shite, don't do it kids)! I will lose custody of my children! That kind of thing.
Both Paranoid Me and 'Preserving The Fiction The Internet is 50% owls in boxes and 50% nice chat with like minded people' Me award that last few paragraphs a special prize as "Paragraphs Least Likely to Reassure Anyone of my Metal Stability and Employability".
The internet is all meerkats dozing in boxes, correct? Thank you. Normal service can now resume.
Oh, you want me to say some stuff now? Ah, right. Well, there is little to report, you might regret that.
1. Alopecia is very in at the moment, honestly it's all over the couture shows in Paris, so let's have some alopecia chat. In fact, better than that, let's have a photo. Alanis Morissette must never be allowed to see this picture, her head would explode with the irony. 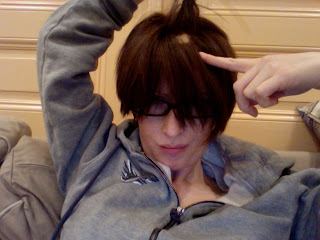 Yes, my friends, once more (yes, it's happened before) my WIG is going bald. I showed F a picture.
F: But wait.. that's like a Zen Koan. "The bald wig".
E: I am supposed to derive some comfort from this?
My new one will be here soon, which means a trip to see John who I love and revere above all men and who has always cut my "hair", so it's not all bad, I suppose. And I am surfing that alopecia zeitgeist good and proper, yeah baby.
Other things that need attention: my glasses (scratched, buggered), 80% of my shoes, anything that was supposed to have buttons. Stay 200m away and I look fine. Stay on the internet, in fact, please, and imagine me less stained and unravelling than I am in reality. Actually, you could come into my kitchen where all the lights have blown yet again. I probably look quite hot there.
2. Belgium is getting a little riled by the lack of government (8 months and counting). Look, it says at the top of this page here that even Pravda have noticed. There are protests and stuff. You have doubtless all heard about the beard growing? I am obviously going to have to put aside my scruples about public life and sort the constitutional crisis out AGAIN. No-one has listened to my idea of making a coalition of female tennis players, cartoon characters and Stromae. We could have Alors On Danse as a new national anthem, everyone already knows the words. Fine. I will sort it out. Give me a week or so, honestly, must I do everything round here?
3. Forthcoming entertainments: Tall Tales on Thursday which will feature the full unexpurgated tale of the Assassin as a distinct low point in what will otherwise be a programme of great hilarity. I like War Horses particularly ( these are letters from Napoleon's horse to Wellington's horse, who have the kind of relationship that would give Melanie Philips a stroke). You can still come if you like, you just email the address on that link. I'll let you admire my balding wig and everything.
That means I am going to London, hooray, it has been aaages (erm, about 6 weeks). M has instructed me about some special Hungarian black facial mud I have to go and poke in Liberty, Fingers has been promised a box of Lucky Charms, his favourite diabetes in a box style treat and I am all out of Bobbi Brown Caviar gel eyeliner. What with that and John to pay, I had better start saving up, or better still robbing.
4. The dog hates me tonight because I washed his stinking blanket. He's like a child with a comfort blanket that must preserve its specially fetid scent (I have one of those, children, not fetid comfort blankets). I did not Febreze him, as I threatened, although he fully deserves it. 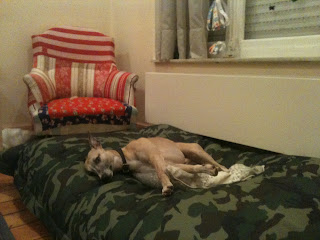 Looking at this picture, I note that I would have been well advised to wash my net curtains instead. It's a good thing that shutter is broken plunging me into perpetual twilight, if the neighbours saw the state of my nets.. Well. It doesn't bear thinking about. Except to note that the nets aren't, perhaps, strictly necessary when the shutter doesn't even open. Maintenance. It's exhausting.
Posted by Waffle at 23:36

Isn't it lovely when the balance of crazy/not-that-crazy goes all out of whack?

I have questions about your alopecia! When did you develop it? Are you hairless everywhere? I don't mean that as pervy as it sounds, but am desperately curious. Do you not have to shave legs? I know this is wrong of me, but the the thought of just popping on a wig every morning is quite appealing. Forgive me, I am a horror of insensitivity.

More importantly, the chair in the picture with the weepette fascinates me. Is that a cover? Upholstered?

Sorry to have such awful questions and no solace.

Not eve close to having read this whole thing, but an "attack of The Mentals" is one of the best things I've read all year. And that's saying something about the past 25 days. Not sure what.

I know only one other woman with the alopecia/wig situation, and she's also a wonderful writer. Not as good as you, but what are the odds?

I LOVE that picture with the weepette. He looks like he is simmering with barely contained fury at the loss of his smelly blanket.

In fact, the whole photo could certainly be featured on the Unhappy Hipsters website, I think.

The weepette's caption would possibly read:

'Imprisoned by grey shutters, grey nets and a greyer mood, the weepette angrily turned his back on the jaunty red chair.'

Poor weepette: He looks very disgruntled. He has 1030 results on google though, so he should be less about the weltschmertz and think about employing his own PR to manage his career.

Mrs Trefusis, weepette is indeed a very famous dog: once while I was having him over for a week-end, i came home with a guy who instantly asked: "Isn't this waffle's dog?"
Oh, dear.
b

The internet is terrifying. I have a show starting on TV fairly soon. It is already attracting tweets that make me feel sick to my stomach. Pure fear and horror of impending humiliation and general ruin. And that's just the OK ones. The internet is great for shopping, cinema times, and booking tickets. Apart from that, you shouldn't look but there it all is - just a couple of clicks away, a toxic soup with extra mentals which is especially addictive if you sit at a computer all day. My dog helps a bit!

This post is, once more, a gem. Love the seductive pic of you with a wig bald patch (looking good, and I mean it). Unfortch, Alanis is not all about the same brand of irony as yours - you know, *actual* irony.
Just wanted to express my concern re. the Hungarian mud M. has requested. I would not go anywhere near any mud from the country which suffered that very shocking toxic RED mud disaster, would you?

This post made me laugh very much indeed, especially the 'attack of The Mentals' bit, and the alopecia picture, and well, all of it really. Thank you!

I've just joined up to Facethingy, rather against my better judgement, but so I know what the blazes the teenagers are on about!
Don't think they'll actually let me in as a friend (that would probably count as stalking), but just need to know how it all works. Cue all sorts of anxieties about how much I'm letting loose to the whole world, and if friends of friends can see stuff I've written, does that also mean the whole world anyway?
It's all set up for total sharing, with opt-outs buried somewhere deep inside, so approaching it with caution is probably a good idea, though not encouraged by the setup. Wish me luck!

What the hell with the wig? Again? Seriously? You're so much less whiny than I would be in your situation.

Vis-a-vis your government: Do you want ours? It's like your redneck neighbor's car that's been up on blocks on his front lawn since 1992: It doesn't work but he can say he has one.

I also love that chair.

already Replica Rolex Watches noticed, pricing doesn’t always seem to make sense in the watch world. There are times when otherwise Watches Replica interesting replica watches are marred by having retail prices which simply UK Replica watches confound the consumer’s sense of reason. Sometimes those prices are actually too Designer handbags high, and other times the prices are fair but the consumer doesn’t understand or appreciate handbag replica the reason for the high cost.