It seems weirdly important that I write something today, which is probably a combination of displacement anxiety and a fetishistic desire to keep my stats looking nice. I shouldn't admit to the latter, it reveals me for the sad, validation-craving creature I truly am (ok, you could probably have guessed that from an almost infinite number of other, people-pleasing clues).
So. What to tell you?
Lashes reported a day of "looking through microscopes" yesterday (I suspect the Holiday Gulag has subcontracted them out to the nearest cytopathology lab where they are reading smear tests), whilst Fingers made origami frogs, which seems to me to veer dangerously away from the original brief of a full week of sticking stuff. All three of us are vastly cheered by the gorgeous little car I am borrowing for a week. Mmmmmmmmm, car. It's terribly seductive having a car to play with as the rain sets in over Belgiana for the next six months, especially one that's small enough for me not to break its wing mirrors off on the nearest likely stretch of wall. I have been dizzily exploiting my new mobility with trips to out of town shopping centres until I get sweaty palmed and panicky at how much budget loo roll, bleach and cheap consumer electronics I have bought and have to put my head between my knees.
I have also "celebrated" the two year anniversary of acquiring the weepette. Look, this is him on the day we brought him home: 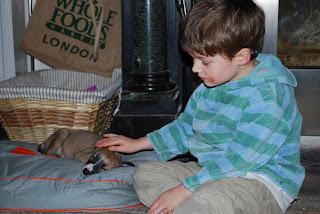 This gives a good idea of how small he was compared to that also very small child (who, in comparison to the weepette doesn't seem vastly changed).
This is also amusing, from a couple of weeks later, the CFO made it for him out of an old jumper sleeve: 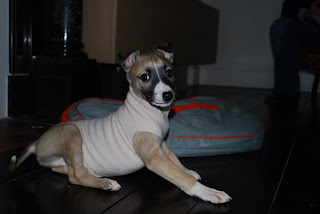 Now look at him yesterday, practising his very best pleading look whilst begging for, well, anything really. I think it was a mushroom here. 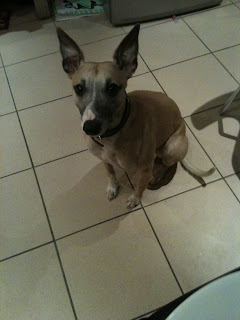 (What's that? My floor looks strangely like the floors in the Holiday Gulag For Obedient Children? Yes it does. it is dirty, half the lights have been fucked over by the Assassin and no longer work, and I cannot be arsed right now).
30% bat, 30% pathetic, 30% random electrical connections in his empty skull. I actually think he has more dignity in the one where he's trussed up in the jumper sleeve. I probably had more dignity two years ago too though, so who am I to pass judgment.
I am particularly amused by the comments on that 2 year old post. Firstly, there are a great deal of people who refer to their own pets as in some way spawned by Beelzebub, which delights me, and many more that say I am "brave", which we all know means "insane". Secondly, I loved this from Grit, which shows great prescience:
"You have an animal in the house and look at it already. it is lolling around doing exactly what it wants while you fetch biscuits and carry blankets. soon you will be going ooochycoo at it, leaving the heating on, buying it squeaky presents and worrying how to amuse it in moving vehicles. This is not sweet. This is evil dressed as dog".
This happy event has motivated me to generate my first video. Its only merit is that it is very short. You also get a brief impression of the prevailing squalor, which is nice if you want to feel good about your housekeeping.

I won't make more animal videos, I promise.
In other news (I use that term exceptionally loosely), I had a brief flirtation with trying to tell myself I liked porridge until it exploded over the microwave, taking me instantly back to my happy, eating disorder days at university, when I would consider a spoonful of microwaved oats and water adequate nourishment for a day, so I dumped it. My "new year, same old shite you" (thanks Tigerbaps) policy demanded it. Also in line with the "new year, same old shite you", I will not be:
1. Taking up gardening. The best kept secret of adulthood is that gardening is just OUTDOOR HOUSEWORK. It's tidying up, but with a different colour palette. The parameters are the same: whatever you do, however you try to stem the irresistible forces of chaos, they return stronger than before. Say no to outdoor drudgery.
2. Drinking less. How can that possibly help? I have ten dry years to compensate for! I have to keep drinking or B will drug me and steal my liver, he's already threatened to.
3. Walking more. I can feel that my knee of death is coming back, after a year of respite thanks to the Dr Kevorkian of knees and his magical lubricating injections (bonjour, keyword searching pervs). I have got one of those ball throwing spoons and am refusing to walk further than the entrance to the park.
What are you not doing to ensure you preserve the old, shite you?
Posted by Waffle at 17:59

not running/jogging/anything similar. Spent most of last 12months in plaster on both legs which appears to have done me no harm so will never wear trainers again.

The Weepette video is brilliant, thank you!
I shall be doing:
No running, or any exercise at all really, despite meaning to, in a vague, slightly guilty way. Moaning. Eating Cadburys. Drinking too much. Forgetting to smile.
On the other side, I will try to get more cuddles from the reluctant infants, as they are growing fast. Reading stuff. Getting some work.
This has become very balanced all of a sudden...

I think it's important that we have regular video updates of the Weepette's activities. He looks *so* pissed off. I love him.

Bon anniversaire Weepette...you really seem like a curmugeon dog. I admire how you ignore your owner and hide under blankets, you are painfully cute as well.

Certainly more Weepette, please..I like his style.
Wish I could emulate it.

I have taken up cake eating. I don't even like it. Today I had four different ones.

I did forget to say that enormopup is only five months old. I have just weighed him. 23 kilos. my arms are hurting.

More Weepette definitely please. That nose peeking from the blankets !

I will not be getting regular haircuts or waxes. Nor will I be walking instead of taking the bus to the tube. I won't be tempering my language at work either. Life is not worth living if one can't swear copiously at ones clients particularly if said clients are also lawyers.

I will not be losing touch with my inner bitch -- or my outer one either for that matter (and I will be checking all beverages as husband recently got the idea that all the females in his family should be on Prozac...since his mother is and is now "pleasant").
Please PLEASE keep posting videos!!!

I am only thinking about going to the gym, not actually doing it. Inhaling dark chocolate as I read your blog. Forgetting to smile or alternately grinning like an idiot in an attempt to placate people. Practising my usual world-class procrastinating. Going to bed too late; getting up too late.

how am i going to maintain my shiteness? nothing that requires any effort on my part.....

I will be maintaining my shiteness by:

- swearing, the whole time, at everything, in every situation, using words that only exist in my head;

- not drinking for the entire month of January in a "Ripley's Believe It Or Not' style, then slipping back to the usual 3 kegs of absinthe and a jug of crème de menthe (note correct use of accent) as midnight strikes on 31 January;

- failing to see the benefit of working full-time in an office and being polite to idiots;

- watching endless episodes of 'Come dine with me' on 4oD

- checking iTunes every day in the desperate hope that finally, yes, finally, Series 3 of "Real Housewives of New York" is available to download for only $45.

Love Weedoggie, I have Weecats who do the same, but paws dart out to get you if you pass by too close. I love your thoughts about gardening....outdoor housework is indeed what it is! So why all the fuss about it, why are people so passionate about it? I've never heard so much said about mowing the carpet in the living room...

Classic - love the dog video, and the last line of your post (of course everything else in between too). Much more realistic way of looking at things I think:)

Nothing to do with new years reolutions, when I will lose that pesky extra stone, but I love that the Weepete sleeps under blankets, like my old, amazingly stupid greyhound & cunning lercher did. Running dogs are ace.

"I have to keep drinking or B will drug me and steal my liver."

Please, please, can I steal this line.

I will not be preparing delicious and nutritious packed lunches every day and nor will I be ironing my work clothes every Sunday afternoon. My copies of the LRB will remain unopened, mocking me and my attempts to appear intellectual.

I hate gardening and I don't exercise as such so, my way of trying to keep fit is to do my gardening as fast as possible so that it becomes my workout. That way, I can spend more time laying on the sofa watching football. Its a winner however you look at it!

Two years ago in a fit of worthiness I put my name down for an allotment, which didn't really matter at the time as there is a really long waiting list. I must be near the top now though so am living in fear of the congratulatory call from the plot secretary. The more I think about it the less I want to take up gardening so my resolution is to ignore that call when it comes, or to pretend it is a wrong number and hope it goes away. Obviously I could deal with the issue by calling the Manchester Council Allotment department right now and asking for my name to be taken off the list, but that would mean acting in a proactive way, as opposed to the 'same old shite me' furrow that I am determined to continue ploughing during 2011.

The past few years I have set myself a project for the year — learning photography, reading more etc — to try and improve my mind.

This year, I really can't be arsed. So I'm just staying my old unimproved self. Eight days in, it's wonderful.

We're getting a car soon, and the intense excitement I feel about being free to hop in and go anywhere at anytime is a bit scary.

Enjoy it! Especially since the weather is warmer.

2011 is the year of embracing microwave cooking, not fleeing from it. Even if you forget to cover the salmon you are steaming and it explodes. You would be surprised the places that tiny fibres of salmon can reach.

I may preserve the old shite me, just a warning for future generations. I could be a educational tool. In some ways, I already am.

"Foodscapes" by Carl Warner. These need some of your people & critters