My children are being unnervingly saintly today. They have done their homework without complaint and have not lost any crayons, marker pens, pointy sticks, busts of Stalin or crucial pieces of paper. I asked Lashes to look at Fingers's homework and he patted him kindly (if slightly patronisingly) on the head and said "I don't need to check it, you're really good at it". Then he came and kissed me unprompted before heading off to watch tv peacefully. Just a moment ago, Fingers called downstairs to ask if he could go to bed. It is sweet, and profoundly suspicious. They must be plotting something. I bet they've stolen my credit card and ordered consumer electronics via the televisual evil that is Disney XD. What does XD stand for anyway? It sounds like a brand of batteries, not a tv channel. They are currently in thrall to something called Generator Rex, which is strangely gloomy, post-apocalyptic anime nonsense about small robots taking over the world and a person who can talk to the small robots and make his arms into swords, or something. They tried to explain but I was driving at the time, and desperate not to lose any wing mirrors inadvertently. No matter. The little I have seen of it makes me nostalgic for the golden era of Pokémon.
Anyway. This odd state of domestic peace gives me time to reflect on what I am doing wrong, as is required by law of all mothers. Thankfully Oliver James is here to help me out, as ever. Regular readers will know how much I love it when the sainted Oliver James, Protector of the Preschooler and Fount of All Parental Wisdom ("think of the children! Will no-one think of the children!") tells me what I'm doing wrong (what we're ALL doing wrong), so I was delighted to see he had extended his repertoire of observations on how maternal choices, circumstances and failings damage children to encompass mess and domestic chaos. Oh GOOD. Now that my children are too old to be damaged by, say, nursery, or maternal depression, or shocks in utero or all of the many and varied things I did terribly, irrevocably wrong in the past, it is greatly reassuring to see that OJ has not taken his eye off the ball in making me feel worthless and guilty. No, not for a moment. A chaotic house, OJ wishes to ensure I know, is one in which children feel "less parental warmth and enjoyment and more anger and hostility". Oh, le big fucking sigh avec le big fucking 'here he goes again' eyeroll.
I thought my ability to work myself up into a froth of outrage at Oliver James was ebbing away with age and the clear evidence that my children are not yet sociopathic child-wolves, shaping up for a life of empty violence and anomie, unable to form relationships, clubbing elderly ladies and puppies to death on every street corner for a tiny, fleeting high. But I think I have just become more skilled at avoiding him. The minute I went back to read his recent oeuvre the familiar Jamesean red mist descended once more. That's probably because I come from a broken home, of course, raised by one of those scary "blind feminists". I should channel all this excess aggression into tidying, presumably.
Further evidence of my depravity is provided by a correspondent today, who notes with interest that my blog is now barred in his workplace. He provides me with a screengrab of the reason. 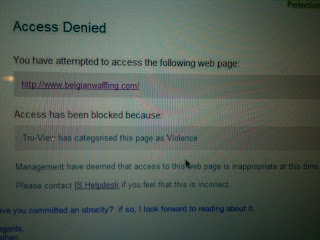 The verdict has fallen. "Violence", indeed. There is only one way around this: I am going to ban myself from everything that makes me angry. I have started to compile a list.
1. Oliver James;
2. Too-small bras, tight waistbands, control underwear;
3. Belgacom;
4. Poor quality "non-slip" rug underlay from Ikea;
5. The UK government;
6. Google Adsense;
7. Loudly sexing on a Sunday night neighbours.
8. Poor bladder control in whippets.
9. Sneakily deposited cards from the sodding postman when you were in all sodding day.
The list could go on all night since, as previously observed, I have many unresolved rage issues from my childhood, but sadly I must now go and tidy my chaotic house, self-flagellating with a Lakeland Microfibre Venetian Blind Duster all the way. Feel free to add your own. If you wish, rather, to be soothed than share your rage, please go and read this blog which is filling me with endless joy. Finding a new blog you completely love is one of those 21st century experiences so particular that it deserves its own word. Unlike the 21st century experience of living on a knife edge of boiler based uncertainty, which is the other defining emotion of my day, and is best expressed with a sort of rasping, wordless ululation.
Posted by Waffle at 21:58

Somebody kindly sent me an article written by this Oliver James with a series of exclamation marks as a message. I could actually feel the rage building as I read it. Sweet Cheezus, is he actually serious?! Why is he even spouting forth? And why is anyone letting him? I need to calm down... But he's on my list. And people who whistle.

1. Colleagues who use the diminutive version of my name without in meetings without any indication from me that it's my preferred form of address.

2. Intense plastic packaging of scissors and razors that requires scissors or razors to open.

I second Alison's number 2. In fact anything packaged so that I need a swiss army knife to get it out. Also tailgaters - they really wind me up, them and the kind of dipshits who pull out (or in) in front of you with about 1/2 a metre to spare.

Oliver doesn't have that angry effect on me - I can feel my eyes glazing over if I start to read his articles and I usually give up after a couple of paragraphs. The man is a total twat.

WV is throgga - presumably what you would like to do to OJ?

I grew up in a house that was as messy as a garbage bin. One of my first fights with little bro - aged 7 - was about the only clean piece of underwear left on a certain morning before going to the school. I think I am quite normal now...

Oh what a wonderful post. Tender (that pat on the head melted my heart), hilarious, feisty, intelligent. Love it!
O.J. is a massive waste of space. Mess goes with creativity. I know that any attempt to go against my messy nature has only ever got me into trouble (I lose everybloodything when I tidy up). My boys appear to be thriving in our messy but warm house.
And ululation is one of my favourite words of the day.

How did I get through eighteen years of parenting without ever having been exposed to Oliver James?

I grew up in a spotless house that always felt cold and unwelcoming. We were never allowed to hang pictures on our bedroom walls or leave fingerprints on the furniture, etc. I much preferred my cousin's messy and comfortable house where no one freaked out if you spilled popcorn into the couch cushions.

Finding a new blog you completely love is one of those 21st century experiences so particular that it deserves its own word.

Not to be a big fangirl, but yeah, just like when I found yours! :D lol

Top billing on my own personal anger list would be any column written by Mail journalist Liz Jones. Especially when she is writing about:

1. Poverty (from her 100 acre West Country estate). Liz feeds her colony of feral cats M&S prawns. I can only dream of such luxury. Her 'poor me' poverty columns are usually juxtaposed between articles espousing the joys of Mulberry handbags and Creme de la Mer.

2. Women with children. I particularly loved the complete lack of irony and self awareness when she berated women for their entitlement to child benefit, 'pay for your own bloody children!' when, in the same article, she castigated Nat West for refusing to extend her overdraft to allow her to buy pet food.

3. Her hatred of women. Liz claims, as an editor, she despised employing women as all they did was moan, cry, whinge, bitch and complain. Moaning, whinging and complaining, Liz herself appears to have built a whole journalistic career on such activities.

Mind you. I LOVE having my blood pressure raised by Liz. I check the Mail website every morning before heading off to school. The sense of unbridled rage is just the kick I need to get me through the day.

XD stands for 10% of your disposable income. It was Walt's little secret.

I ditto eRiN on fab blog find...ps- yours

1)People who let their dogs do their business on the pavement right in front of the school door. My blood temp rises and extra few degrees when it is in front of the Ecole Maternelle.
2)Children who tell my daughter she can 'borrow' her own best friend to play with for 15 minutes.
3)Pulling on boots that have a narrow ankle and are hard to pull on AKA 'welly rage'
4)Kids tugging on my sleeves when I'm trying to work on the computer

I'm sure I could go, but I'll spare yous
B

My children are doing the same as yours at the moment. They are being Absolutely Lovely. I am enjoying it while it lasts.

Oliver James is the worst kind of person. I've got a psychology degree and I am ashamed of him by association. Seeing his name written down, though, always puts me in mind of Jamie Oliver (who could be his polar opposite), and that usually makes me think vaguely happy thoughts (e.g. nice food, beautiful blonde children, immense riches), instead of foaming rage.

Urgh urgh urgh - HOW do the postmen get those calling cards in?? They must actually tiptoe! Then all December I kept getting emails saying tracked parcels couldn't be delivered because I was out and if I just entered the calling card number I could arrange redelivery...BUT THERE WAS NEVER A CALLING CARD LEFT so I could never get any further on the fully automated process and was just left to growl profanity down the receiver and be constantly told, 'I'm sorry, I didn't hear that. Please state the calling card number again.'
There are probably still items of thermal underwear out there waiting for me.

"... making your house a germ-free zone ruled by a military schedule is not enough..."

Snap! Of course not! Obviously you must also beat the children regularly.

"If fathers take up the slack and seriously engage, they can reduce the chaos and increase the amount of warmth and fun."

WV - couchop - a particularly painful Karate move, i.e. what I'd like to do to the Oliver James types of this world. He speaks of child rearing in the authoritative tone only found in the childless.

He actually has a child, Dawn, but he didn't have it until he was approximately 9000 years old. His wife does not work, you will be flat out astonished to hear, doubtless.