No school all of this week. Somehow our childcare arrangements over the holidays have involved the CFO getting Christmas (Magic! Childish wonder!) and me getting New Year (Booze centred adult amusements! Childish early rising and boredom!), and the dead, dark, cold week in January when all the Christmas toys are broken or disdained and my angelic, articulate and highly sociable children are so sick of the sight of one another that their interactions span a scale from extreme violence to cold hatred, with an occasional sprinkling of dangerous hysteria. Another piece of masterful negotiating from Beddington, Master Negotiator In Chief of All Belgium (Learn my secrets in book 3)
Obviously I wish to spend as much time as possible with my darling boys, each discarded wrapper handed imperiously to me is a privilege and every impenetrably puzzling cruelty or injustice one has inflicted on the other that I am required to unravel is a gift from the heavens. Neverthelesss, I must try and scrape a living in ever more implausible ways and a week off is out of the question right now, so I am grateful for the wide range of extra-curricular activities provided by the enlightened society in which I am fortunate enough to live. This week I have enrolled them in the Jolly Holiday Gulag for Obedient Children. Look how much fun it is! Welcome, children! 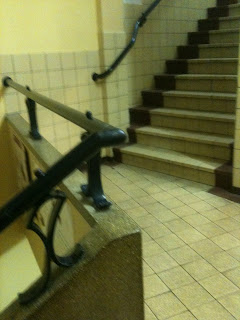 I must get you more photos of this venue (which is a school, suddenly the real Gulag looks as soft, welcoming and cuddly as the Tellytubby house crossed with a boutique hotel). It is very much rocking the "Romanian Orphanage Chic" interior design vibe and looks like it would make an excellent venue for an avant garde fashion shoot. I keep expecting to see moddles in Ann Demeulemeester leaning languidly against the tiny hard metal chairs, their cheekbones reflecting the yellow toned strip lighting. I had to sneak this one whilst delivering Fingers to something called "Collage". Not "collage" in the English sense, just your basic "sticking". I thought I had signed him up for "Peinture, Dessin, Collage", but it turns out those were three different activities. I mean, you wouldn't want things to get TOO exciting. A tube of Pritt Stick between ten is quite sufficient entertainment, surely (Head of Holiday Gulag Entertainments: O. Cromwell Esq).
I asked him how it was going, with some trepidation. Oddly, he appears to be enjoying it greatly, though he did have a couple of practical comments.
"It's very cold"
"Oh?"
"Yes. There's a broken windowpane. We had to wear our coats all day".
"Goodness. I'll give you an extra jumper tomorrow".
"And we aren't allowed to drink. I'm soooo thirsty".
I asked one of the heavily bearded supervisors about this, mildly, as he sat, slumped against the gymnasium wall with an expression of defeat I recognised, having seen it often on my own face after prolonged exposure to groups of small children. He looked shifty.
"We give them a beaker of water. At ... intervals".
I love this. So marvellously Soviet.
In the meantime, his elder brother is in the basement, doing "Science", though all I have seen so far is four coffee filter papers that are supposed to represent the northern lights. I think they are actually building a life-sized replica of Sputnik 5 out of egg boxes and an makeshift glue (Atelier Collage having all the real stuff) made from Speculoos and tears. Either way, he is also, it appears, having a whale of a time. I dread to think what this implies about my parenting.
At the end of the week there is an "Exhibition". I can hardly wait.
Posted by Waffle at 21:42

Seems vacation child care is the same the world over.

My favourite "crafts" my children brought home from these things were the pictures created from chopped up foodstuffs glued to construction paper.

There's nothing quite so inspiring as watching carrot coins decompose whilst attached to cardboard.

character building.... one of mine got lost on a holiday club trip to Great Yarmouth and spent an hour in the office of the bloke who ran the arcade on the pier - he loved every minute of it,,,

My (then) 5 year old dissolved into hysterical tears on meeting the very heavily pierced and tattooed coordinator of the vacation care centre I'd booked. Not an auspicious beginning, but it turned out that she'd leapt to the conclusion that this was to be the activity for the day.... And once we'd cleared that up, she had a great time!

In my fantasy of a Jolly Holiday Gulag for Obedient Children there is somewhat less industrial tile and dirty grout. But I'm American--we like our gulag walls in bright and primary colors and preferably made from lead-infused Chinese drywall.

Brilliant, especially the water only at intervals, and the cold. Builds character!

(I have never been impressed by any word verification I've been assigned before, but mine, right now, is "NATION". As in "OF BELGIUM". Waffle, what, pray tell, is the national anthem? I would like to stand up and sing it solemnly.)

It's as though they are trying to create something like an institutional artist's garret. Hardship fosters creativity you know.
It certainly is very... tiled. And yellow. Cozy!

Brilliant. I'm going to adopt the phrase 'at....intervals' as my personal mantra in response to any number of the stupid questions I get asked. Did he say it with his head turned away from you to disguise the slightly shifty look?

so tempting to put mine on the Eurostar - that will learn em!

A couple of years ago my kids were parked in what we collectively nicknamed "Camp Desperation". The verdict from my then 9 year old son about the activities: "Salsa Dancing is exhausting, but it is nowhere near as boring as Tai Chi!".