Another short, dark day in the magical kingdom without a government. I am missing my lovely sister, the Space Cadette a little right now. She has sent me a parcel of tree decorations from whatever vegan squat she is currently inhabiting in Denmark.
Aren't they lovely? 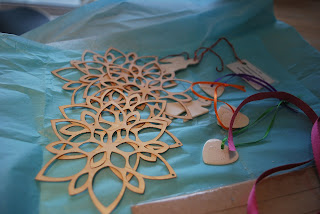 She gave me to understand that she might have liberated one of them from a municipal Christmas tree, which only adds to my joy. Thank you, Danish taxpayers! 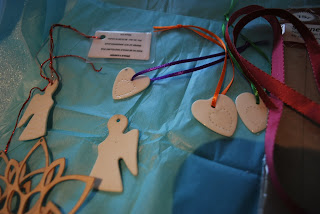 There appears to be some kind of rôle reversal at work, whereby she has become the kind of person who sends parcels in a timely and considerate fashion, and I become worse organised by the hour. I am not going to try and analyse it, I am just very grateful for the decorations and looking forward to seeing her sometime in the next couple of weeks.
Also, look who the spawn brought back with them from their father's house: 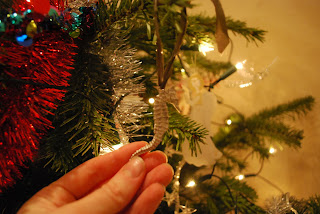 Yes, it's my friend the pewter seahorse who I had shipped all the way from New York back in the day when I earned corporate lawyer money and could indulge in such Marie Antoinetteish behaviour for a tree ornament. I am delighted to see him, he is adding a touch of restraint to the Vegas vomit mini-tree which I have developed a sneaking fondness for.
Their father was in fine fettle when I saw him yesterday, having defied the odds and got back to Belgium more or less on time on Eurostar. Extraordinary. He must be the only person who managed to go to London and back this week without significant disruption. He explained to me with great glee his very un-English technique for arriving ahead of 800000 people who had been queueing for most of the day, which involved ducking under some barriers whilst making a fake "like this? Is this what you meant, official person?" gesture to an IMAGINARY person behind the Eurostar counter. Whilst, obviously, as a British person this is complete anathema to me and I am appalled, I also have a grudging respect for the pure cunning of the man. Travelling with the CFO always made me confident of survival in the event of some transport cataclysm, whereas on my own I would allow myself to be crushed in the stampede for the exit, or for life jackets or whatever with barely more than a suppressed sigh, or a tut, to mark my passing. Moral superiority and decency is all very well, but it doesn't get you on the last Eurostar out of Vietnam (St Pancras).
Few of us are in fine fettle in this house, in contrast. Lashes is moping around like a nineteenth century consumptive, whining lightly about how tired he is, to which I respond, acidly, that if one is in the habit of rising each morning at 5h50 because one is "tellement excité", this is inevitable. I fear this might be the year that he experiences the formative experience that is your first anticlimactic Christmas - not because it will not be jolly and lavish, it will, but because like me, he appears to be the kind of person whose feverish, demented imagination in the field of gifts and festivities far outstrips anything reality could ever offer. I hope I am wrong.
The dog is limping for reasons that I thought were grit related, but now I have thoroughly washed its paws and the limping continues. It might be psychosomatic, the Assassin may have used him for some kind of secret mission. Whatever it is, I am more kindly inclined towards him limping, possibly because on three legs he is far less well equipped for pulling me unhelpfully across the road in pursuit of a cat, or a particularly tasty looking scrap of used tissue. Also, it seems to handicap him in his favourite pastime of jumping on my knee at inopportune moments to try and reach food; I get plenty of warning of what he has in mind as he stands by my chair, rocking, and bending his canine knees with a vacant expression that could be mistaken for concentration, like an inept pole vaulter.
I am simultaneously fat and dessicated, self-indulgent and snappy, panicky and filled with torpor. If St Nicolas were still lurking around, he would most definitely be putting me in his sack and kicking me to Spain. Would it be dark and quiet in the sack? Could I watch back to back Grey's Anatomy and drink tea? Would someone else be deputised to make all the decisions? If so, I would welcome it entirely.
Only Fingers continues to thrive. Between bouts of Nintendo and rattling his presents, he has been telling me at length about his techniques for super precise colouring and how you can ensure you don't lose pen lids. He has just come in "to take your toolbox to fix something" while I stared hard at him and wondered how exactly he got swapped at birth when he was the only baby born that day in University College Hospital.
I must go and cattle prod him away from Mario and Luigi now, in order to follow the very wise Irretrievably Broken's advice on divorced family gift giving and find something for the CFO. Atari style gift idea for Xbox-y recipient needed as a matter of urgency..
Posted by Waffle at 16:01

I was genuinely horrified by CFO's Eurostar swindle. I mean, I'm sure he's a lovely bloke, but there's a special place in hell waiting for him.

Well considering hell is currently located at St Pancras I think the CFO dodged that bullet.

I was there last night (after some lying liar from Virgin told me I could find a train to Scoltand there) and I only got out at midnight after a very kind man from \scotrail got me on to the last sleeper to Glasgow.

I also have a limping dog. I didn't even think of being grit related — I thought he just went so berserk in the fields at the sight of the snow that he twisted his legs. Thanks for the tip.

May I suggest the Collected Works of Edgar Allen Poe? Will work extra well as the CFO is French. I used to derive great amusement from getting my French students to read "The Raven" out loud ("Once upon a meednight drear-ee, while I pondaired, weeeeak and weeeeareeeey...")

But seriously, nothing says Merry Christmas! I used to love you! like the gruesome and macabre. Take it from me.

I LOVE Denmark and hygge. I think it is the best place on Earth, I really do, and so I envy your sister.
I am also envious of the seahorse.

I confess I used a technique similar to the CFO's to get on the only plane out of Paris for Portugal yesterday, thanks to the kindness of a fellow traveler who had been stuck in CDG for 2 days and translated my English into French and/or Portugese for the surly AirFrance reps to help us get on board ahead of the endless queue. I feel blessed with good travel karma.

Having just recovered from a Nightmare At Gatwick - I am impressed by the CFO's behaviour. I would've done anything to get out of that hell hole on Sunday night.

Glad to see you've got some new tree decorations - but keep an eye on that dog, I think he might be faking it!

As a Danish taxpayer, may I say 'You're very welcome'. I hope you have lots of Hygge.

P.s. I defy you to actually define the word 'Hygge'

@ Anna Maria: As an ex-resident of Winchester, I'd swap it for Denmark any time!!!!!