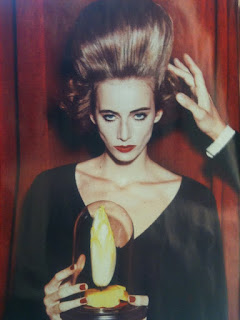 You can see a few more pics from this spread if you go here and click on the picture. It made me very very happy.
Posted by Waffle at 19:58

Dear Emma,
I have been treating my (also unexpected) Christmas blues with amaretto coffees at the local (Leuven) Christmas Market. They seem to be almost entirely amaretto with a whiff of coffee waved over them.
This is probably not such a "good" thing to suggest, however, at this point in time & state of mind, fuggit, it's working!
As for your "Leon" accountant, MAKE IT UP. Tell him you have been cited in Wikileaks as a....(& the Belgian ambassador said...).

same here: COMPLETELY undone by Christmas. Wish I could sleep it through, and wake up early February.

For a start, look at what you achieve as a slightly unofficial Belgian Ambassador. You bring Fabiola and her high hair to the world! I thank you for that.

As for Christmas... it will be over soon. Sorry, that's the best I've got x

The emotions do play up at Christmas/ birthdays and such like, it's a fact. And the situation is made a whole lot worse when someone steals your tree decorations! Please email me your address and I will send you some lovely felt decorations to throw onto Liberace's vomit.

nice. you are indeed a writer--a fine one at that. that patrick to put that in his endive and smoke it!!

By the way, you ARE the kind of person who will be fine. Just because you aren't right now doesn't mean you won't be.

1) i may need jean-yves at some point in the near-middle future. he sounds like a man for me.
2) look up NUJ membership. if i remember correctly they have a sort of expat category that you might fit into. they definitely have a Brussels branch.

And are there no freelancers in Belgium? Is the red tape mentality even worse than in France that one's activity has to fit neatly in a little box? I have been a freelance in the UK for nearly 20 years, with ups and downs, sure, but that's what I am and the authoritahs seem fine with that. As long as I pay my taxes on the rare occasions that my income requires it...
You are most definitely a writer, that goes without saying, a self-employed writer. If J.-Y. can't get his square head around that, it's really his problem.
You WILL be fine. Christmas has a habit of brining all sort of crap up, but you WILL be fine.

Emma, I'm afraid I don't know you well enough to comment on some of the other things, but I just wanted to let you know that you shouldn't doubt your status as a writer. I never had Jean-Yves or any other accountant in Belgium. I have one now, but she's my sister-in-law. I worked as a journalist for seven years in Brussels, and never got round to joining any journalistic organizations. I never got a press card, either - I vaguely remember discussions about it, but it just seemed too much hassle, there were always other things to do, and nobody ever asked me to show my press card. I still write articles for newspapers sometimes, and my company description includes journalism in my field of work. And I feel comfortable calling myself a journalist. The payments from newspapers and magazines for words I've written are proof of it. You're a writer: a journalist and a novelist. (Judging by your writing here, I expect you're brilliant at both.) You can easily get a press card or join an organization if you need to prove you are these things legally - but you shouldn't doubt you are these things.

Oh gosh, working freelance in Belgium is overwhelming. Is it too late to sign up in the UK instead and just pretend?
I felt something very similar last year though re the social security and all that jazz and everything does work out fine, one way or another...

Agreed with Margaret and soleils--you're definitely a real-life writer but, from all that you have written of Belgium, it appears to be a place where one's status is defined very much by forms and bureaucracy; so between not having a press card and doing a good amount of writing on this newfangled medium called the internet, you are confusing the people whose business it is to work primarily with the official channels. But we all affirm that you DO exist as a writer, so there! However it seems like the freelance press card might be a nice way to satisfy TPTB. (Perhaps then you could also gain entry to interesting events about which you could write?)

I am completely with Jeremy on this, you ARE a proper writer. Your posts make me howl with laughter or ugly-cry, sometimes simultaneously. You are my blog-idol *stalker face*

You're a proper writer; we just need to sort out the money.

Honestly, try e-lance for translation work and writing jobs. They do start off paying very little, but if you are good, the client wants to keep you and you can earn more - even writing blogs for people. Honestly.

Every post you write either has me peeing with laughter or weeping into my keyboard - either way, you're one of the very few people can make me emit body fluids :-)

I worked as a freelance writer (okay, for educational materials) in the Netherlands and here any freelance contract/bills/emails about freelance assignments that you have count as much as a press card or any other possible "proof" of being a writer. Maybe that would help?

Oh and I agree with Pat: go for the special coffees. They'll make your day so much better (I like mine with whipped cream and chocolate flakes).

I have a comment regarding an earlier post - have you tried using nappy cream on your face? - This is not intended as an insult :) Sudafed is good in this weather - solves all known winter skin afflictions,with added bonus of making you look seriously pale and interesting - a bit like a Japanese No actor between scenes...

look the feather rabbit ears are on sale! i am v tempted.

Re. the google ads: what can we do to make them profitable for you? Do we have to click on them and wait for them to load, the more often the better? Or do they only pay you for one viewing per computer at any given time?

Here's hoping you are leaving those xmas blues behind you and as for the accountant I'm with Extreme English.....

nice to meet your blog, pop over to bigwords if you need a giggle x

breathe deep for those ornaments...ergh....

remember Bernard in Black Books (his accountant meeting, where his filing system was the pockets of his big dusty black coat).

Mine is a Pampers nappy box and several bits of coloured paper...