Deck the halls with boughs of Bakugans

Sorry, sorry. It's hard to type from inside Chantal Biya's hair (though it is, at least, warm), and I haven't done anything much in the last couple of days except make ever more elaborate lists, stomp round the neighbourhood like a crabby babushka with the limping, pathetic dog (pavement grit gets in his paws, ramping him up to at least 500 on the cringeometer) and watch the penguin cam. Actually, that's not fair. I have also been powering through my lists with terrifying laser focus for ooh, two or three minutes at a time. I slightly hate myself, actually, even though I haven't yet tackled such crucial list items as:
"Search through the recycling bags for missing invoices disposed of in a fit of misplaced zeal".
or
"Make 12 months overdue orthodonist appointment for eldest child".
or even
"Wash"
Even so, I have done as many as three or four oustandingly tedious multi-stage, Belgian administrative tasks and made a luxurious, multi-columned list to pin on the fridge, as well as scrabbled indefatigably around for work for days. I would like to reward myself with a week in bed or better still, a trip to buy scent to replace the second bottle my children have broken this year, but apparently that's not allowed.
Anyway. I have been punished for my absence by having to leave that last, embarrassing, dignity free post up for days and days, long enough for someone to suggest I probably have herpes (I DO NOT HAVE HERPES). In the meantime I was on a boat in a snowstorm watching grown women sit on the knee of a creepy St Nicolas with a loo roll beard and eyebrows. At the same event, I also learned that if you put certain items in your shopping basket in a particular Delhaize in Antwerp, you are signalling your sexual preferences to other shoppers. Other things I have learned about in the last week: cultural proclivities of the Latvian diaspora, passionfruit liqueur (nasty), some car stuff that I have already forgotten, and the details of the Directorate General for Competition's Chief Economist's mandate. I can tell you about all of these (you might prefer it if I didn't), and about my amusingly inappropriate new job involving things with wheels tomorrow, but tonight I have to go out in two minutes, so I will leave you with these pictures from my advent calendar, made for me by my delightful children. I am very proud. How Christmassy!
Look! 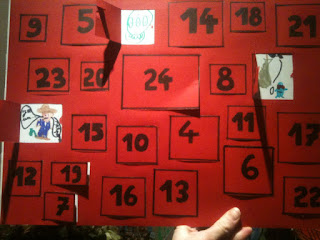 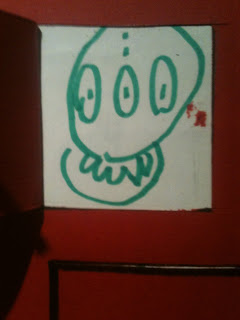 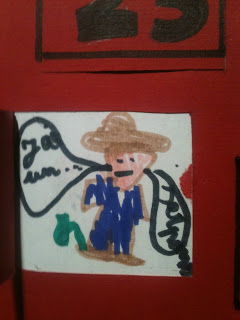 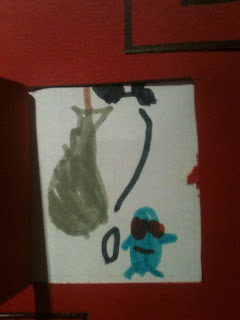 As mysterious to me as it is doubtless to you.
I feel more festive already! Deck the halls with .. snakes. And three eyed aliens.
Posted by Waffle at 19:06

I'm delighted you posted just as I started my lunch a continent away! However, now somewhat anxious that my life will feel unfulfilling until I too know the code of the Delhaize in Antwerp; please share.

I'm thinking there is a Toy Story theme in your calendar. That would explain the cowboy/snake/boot thing at any rate...

I take it you already know that if you have that elephant grass / pamper grass stuff growing in your garden it is a sure fired sign you are a swinger? I did not know this until after we had lived in a house with said grass for two years. Now I am worrying what signals I am giving to fellow shoppers in our local Morrison's. Please help with some clues, mind you, Belgium and all that. Probably weird. Not like here, in the west of Scotland. No, nothing remotely weird about Irn Bru flavoured sausages.

The advent calendar is amazing, if enigmatic.

You sound so productive: is this due to the laser-focused ass-kicking, of which we are dying to hear more? Go on. O you mite.

the Delhaize mentioned is just around the corner here, and i do show caution when shopping there on friday night , in case i unsuspectingly use one of the mysterious dating codes when putting the apples on the right side and the bottle of wine on the left in the shopping cart.

I'm not going anywhere near the fruit in that shop, that's for sure...

This post makes me oh-so-glad I do not have to buy my groceries in Belgium. I am lucky if I even remember to pick up bananas, never mind remember which side of the cart the go on to announce desperate, desperate, unwilling celibacy.

wv (I kid not) monism

Just what location in the shopping cart would signal that?

I hang my head in shame at my previous "diagnosis" (the "H"-word). Truly sorry! And very glad that this is NOT the case.
Hope you're feeling better (you're sounding better).

Now I'm going to re-read the "Del Haize dating code" because whatever I'm doing in my cart is keeping everyone a good 10 paces away from me. (I probably need a lot more booze in the cart for a start...)

Might day 3 be a mexican wrestler with a punching bag?

I love your advent calendar. It's such a BOY one! I forgot to put my daughter's one up and she left me a note saying since I owed her four days she would rather I forget it and just get her an iphone. The spirit of Christmas lives on.

I also want to know the secret shopping code. I suspect that Dan Brown will even now be writing a book to decipher it.