Bloody hell, a whole week with no Belgian whining for you, that doesn't happen often. It was the fault of painstakingly slow and labour intensive arse biscuit production gulag, then lots of travel and meeting half the internet, then no wifi, then more disastrously snowy travel this evening, culminating in a taxi driver who told me - AFTER picking me up following a 40 minute wait in a blizzard - that there were only 5 roads he was prepared to go down in Brussels this evening.
"Ah non, Madame, pas Uccle. Je ne saurais pas le faire, ça".
("No madam, not Uccle, I can't go there" - but said in a special, Belgian way)
"Uuuunnngggggnnnnggg" (wordlessly waving €50 notes)
"Bon, mais je ne sors pas des grands axes".
("Ok, but I won't leave the main road")
When I finally got home after a great many hours, it was to a scene of canine devastation after both the people tasked with dealing with the weepette signally failed to stop him sneaking up to the children's bedrooms, eating 800 chocolate coins and pooing on the rugs. I mean, what?? How does this even happen? What was the weepette even doing back in my house tonight when he was supposed to be Chez Assassin? I have no idea, but I have a cold whisper of dread whistling round my head telling me that it may mean the Assassin now has my door key. Slump.
On top of that, the whole week has been punctuated by a lot of that kind of wotthehell pre-Christmas drinking that leaves the edges nicely blurred, but has also left me a broken husk. You may also note the WTF o clock time stamp on this post: this is because Lashes has got his Christmas psychosis on BIG TIME and woke at 5:45 to tell me festive things. Yes, this is me catching up with some whining, I wouldn't like you to feel you missed out. I'm sure I can be sourly displeased with plenty of things for you today, like a performing, er, capybara.
There should, at least, be things I can tell you though, surely? There must be, but I am distracted. I am scrabbling to catch up with the relentless march of this Weichnachts thing (I can't even say it in English, it gives me cold sweats). How on earth did it end up being in less than a week? I have not done any of the things I needed to do, and risk alienating every member of my extended family who is still speaking to me with my general fucked up weichnachts incompetence (I hope there's a proper German word for that). On top of that, I have a whole series of other things that are not even remotely weinachts related that I also need to do within this same, terrifyingly short stretch of days. Because (and this is in fact excellent news and I am not going to pretend otherwise) just after writing that last post filled with career angst, I got a little wave of work in, all of it on very short deadlines, and have been scrabbling around to do it all. There is also the daily growing menace of neglected Belgo-administration rattling its chains and moaning, and..
Whoa. Hang on. Stop right there.
Did I even TELL you I went cage fighting? I didn't, did I? Ha! I went cage fighting last week. It was for a slightly mortifying thing I was writing in Belgiana, I will not tell you more than that, because that would spoil the lovely surprise for all the Belgianans who buy this august publication (I think they put it online eventually, so if you're keen I'll put up a link when it comes out). I suggested the mortifying idea anyway, so it is all my own fault. The cage fighting element was not my idea but it was pure bloody brilliant. Really. I am not joking. A man with not very many teeth made me go into - I was going to write "the ring", but of course it's not, it's the CAGE, and just writing that makes me cackle with joy - the cage and taught me, using an entirely silent and rather puzzled man, how to grapple, to fell someone using my knees (and ideally get out of the way before they fall on top of you), then kneel on their chest and punch them in the face.
Let's take a moment to think about that. Firstly, I bet you can think of someone you'd like to do that to. Or even, just do that whilst thinking of. It was amazingly cathartic. Secondly, some of you may remember me occasionally mentioning how bad I am at pretty much everything physical? Well, you will not be surprised to hear that this was no different. I think I stunned everyone with my complete absence of gross motor skills. I repeatedly grabbed the wrong arm, or turned the wrong way, One of the times I was supposed to be kneeing silent Paul to the floor, with devastating killer efficiency, I got the whole thing terribly wrong and ended up kneeing him in the crotch, to general hilarity (even from Paul, I am too puny to knee him hard enough for it to hurt). 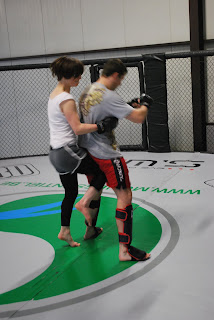 Several other times I just fell over, unprovoked, as if astonished by the mere existence of my limbs. It was great. It was at this place, which is basically a giant shrine to hitting other people. I watched them do one warm up exercise which consisted solely of standing in a line and punching each other in the stomach repeatedly. You can't imagine how exciting that is when you went to Quaker school. I owe them a link at the very least, they were lovely and tolerant and didn't really have a clue what on earth I was doing there even though I did try to explain.
Other high points of the last week:
1. Meeting the Non Working Monkey yesterday and stealing croissants straight out of her neat little monkey paws. The Monkey speaks most excellent French, so we managed to alarm the fey little barmen by booming rude English words at each other and cackling, and then asking for things (mainly wine) from them in brutally colloquial French. I hope the monkey will put the covertly obtained photo of the fascinating man in our bar whose shaggy coat collar exactly matched his David Essex hair on her most excellent weblog.
"You want to touch it don't you" she goaded me. "With your tongue".
"Eeeewww! No!"
Then we confiscated a mournful polar bear that looked more like a dog: 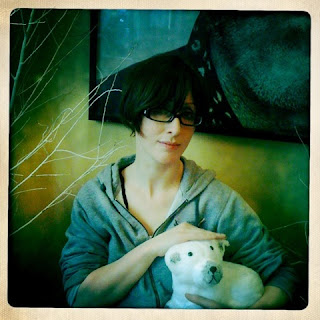 I could cheerfully have stayed all day. There were no incidents with pregnant women and knives. None at all.
2. Watching my friend A try on actual real life wedding dresses (ok, closing down sale dresses, but even so, they were actual dresses made of white frouffy stuff costing more than .. well. More than my electricity bill, but that's a whoooole other story). I don't know many people who get married and if they do, they don't invite me along to say inappropriate things about dresses. We were quite overwhelmed and had to run away and drink wine. In the dark.
3. Watching Santa tramp across the heavy snow in the beautiful park in St Germain en Laye sitting next to a magnificently twinkly tree, to the accompaniment of Frank Sinatra's Weinachts album and champagne, and then staggering through the incredibly silent and snowy streets: 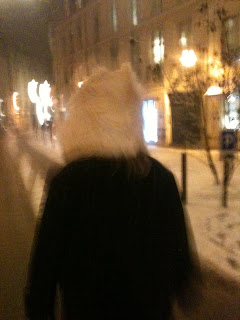 in red patent shoes (I did not have any sensible footwear, which is how I ended up spending 4 hours at Gare du Nord with wet toes) to eat half the North Sea and gigantic choux buns in salted caramel sauce (and yes, drink wine, of course). It was, basically, Christmas come early. Look! It's made me say the C word. That's how good it was. Then I fell asleep on a beanbag and drooled, because I am such a gracious and charming guest.
4. Going to a lady freelancers' Christmas lunch in London, even though I do about as much work in a month as the rest of them do in a day. But see? I whined about getting no Christmas party and there it was, my works outing. It also meant I finally got to go to this place and eat a whole plate of tiny tentacles. With a toothpick. That was easier before wine. I also got to have scones and cream in the dark with one of these people, eat 8000 biscuits in Beckenham, eat tortilla and drink gin in South Kensington, present my adoptive gay son with conjoined fondant jesii and listen to my father fulminate about his Christmas cards. A full and frank 48 hours.
5. The gnomes of Google have finally approved my plaintive demand to be allowed to place adverts on my weblog! When I checked them out last night, there were "pretty Ukrainian girls" on offer, as well as hotels in Mons and Christmas tree earrings. Really, everything your heart could desire, my pretties. I do spoil you.
I must go. Even though it is only 6:45, both my wretched children are up making sacrifices on the shrine of Mario and Luigi, and even from my bed, I can feel that they have left the back door open. Soon one of them will come up and say something brilliant like "il fait super froid en bas", as if I were the queen of meteorology and I will explain the principle of cause and effect to them once more and Electrabel will still own my ass. Le tout petit sigh.
Posted by Waffle at 06:45

I am exceedingly pleased to report your current ads are Giorgio Armani beauty, noradsanta.org (this is brilliant, if any of you with kids don't use it on Christmas Eve, do. It's the US government's Santa tracker), the NY Times and Groupon. I can only conclude that Belgian Waffle is the High Rent District. Well done.

It offered me deux hambeurgeurs for the price of one. Merci, Belgian Waffle!

Is this Freudian? Christmas in German is WeiHnachten (weihen means consecrate). Weichnachten could, in this logic, be derived from weichen, which means "yield", and Weinachten from weinen, "cry". Both have to do a lot with Christmas, though.
So much for the ethymology. I love your blog. Ich liebe Dein Blog.

I got two ads for Ukranian ladies (one with webcam), one Groupon (cake!), and one for diabetic Christmas pudding (?!). Hope that your Christmas involves none of the above. Only full-priced cakes will do.

Hey, I'm getting lighting a Votive candle and cheap beauty deals ....what does this say about me?? (Maybe better not to ask - ugly and in need of saving by prayer?)

Classic post, love your blog! I've been reading it for several months, didn't comment but your leaving us dangling for a week has made me see the light. Oh, and I had Humorous Christmas Card, Interactive X-mas Cards (clearly don't confuse the two) and EO Magazine 'Bekijk de Kerstspecial'. My word verification is 'tambacte' which makes the visit complete!

I feel guilty i wasn't there, for the weeepette darling.

An ad for sushi in Liverpool. Will only click if it means loadsa Euros for you.

The ads are whole new dimension of amusement - this could be as good as WV or even key search words!

I got 'The True Origin of Christmas - Does it originate from the Bible? Watch Video Revealing Christmas!' and an iresistible offer from Denmark's largest Christmas lights warehouse.

I'd settle for the Ukranian ladies.

This year I have made burnt sugar fudge sprinkled with French sea salt. In case you are interested.