Today's notes:
Eau de Get Off
My new bath oil smells exactly like the optimistic dog repelling spray I use on my fridge, which is called (also optimistically) 'Get Off'. I don't know quite what I think about this, but at least the dog is unlikely to pee on me. Mmmmm. Come and get me boys, I smell deliciously of a chemical citronella fragrance that makes dogs not want to pee. Better than the opposite, I suppose and I speak as someone who was once peed on by an American Staffordshire slavering hound dog of death in the park.
The Teenage Christmas
The Christmas this one most reminds me of is when I was about 15. It's probably to do with the amount of time spent moping in my bedroom, feeling trivially tragic, misunderstood and fat. The problem is, I have run out of hospital drama, and without it, my sense of perspective has vanished. Without mawkish Grey's Anatomy tragedies every half hour, I am mopey and sad about my own tiny first world ones, like a sulky teen. My nail varnish application is just as bad as it was back then then, but at least no-one has just broken up with me in the Kings Arms when I have spent £8 on an expensive import Shonen Knife album for them (you know who you are).
Oh, and there's the homework thing - lots of stuff I should be doing but the deadlines are just fractionally too far in the future for me to quite get my shit together, like the lurking menace of mock exams. I can muster 'sitting at the desk', yes. I can muster 'unfocussed resentment and obscure sense of martyrdom'. I can muster all manner of displacement activities. Just not 'work'. What I really need is for Jean-Yves the accountant to give me a mock exam on my accounting practices on 4th January. That would be motivating. A selection box would also be motivating though. A kick in the ass and a lecture would be not only motivating, but also appropriate for my sinking-back-into-adolescence state.
Horrible, horrible dreams
Yes, I know other people's dreams are the most boring thing in the world, worse than televised golf or geology or other stuff that begins with g. Indulge me momentarily, or skip over this paragraph for the treats that I have not yet thought up but which will doubtless follow. I have a number of recurrent dreams and they are invariably horrid. They are:
- Screaming furiously at my mother, who is dying (I am angry at her for dying, I think, which is nice of dream me);
- The teeth falling out one;
- The one in which I have buried, or otherwise disposed of (variously in chests of drawers, under the floorboards, in the attic) the body of someone I have killed and I am about to be found out, usually because of smell or seepage. I do a lot of killing in my dreams, and especially at Christmas, look, here is incontrovertible blog proof from 29 December 2008. I do miss the CFO's advice on killing. For a few years, his pre-sleep meditation used to be trying to devise foolproof ways of killing heads of state (he had to find another pre-sleep meditation when he hit upon the radioactive press conference lectern).
- New, but also disturbing, is my "incredibly awkward lesbian" dream which has happened twice this month. I am not good a sexing with women in my dreams. This is all you need to know. In fact, I've said too much already, I'm creeping myself out with my dream self's sexual incompetence.
I had particularly vivid versions of the two latter last night. The body dream was especially alarming as I kept semi-waking up and trying, fuzzily, to remember whether I had actually killed someone or not. I haven't, right? I really don't think I have, I would be bad at it.
C'est party
Oh. I lied, I can't think of any extra treats. However, I do have a lovely photo of my tram stop yesterday as I waited in ankle deep slush for twenty minutes. The magic of a Brussels Christmas. C'est party, indeed. 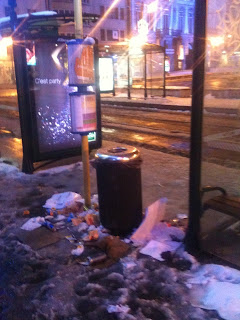 Labels: 'tis the season to be scared witless

If it is any consolation I also have the killing dream. Usually it involves me and other members of my family and we are always just about to be found out. Recently the dream has changed and now we are just guilty of disposing of the body rather than the actual murder itself. I consider this progress.

Weird - I'm a terrible dream-lesbian, too. I'm always aware I'm making a scrunched-up 'ewe!' face like I'm licking a bogey ice cream. I'm sure it's no reflection of our real-life sexual prowess though. Hopefully.

I like to dream about gay men with whom I have absolutely no interest in real life. (Not Hugh Jackman. Think Tim Gunn--nice, certainly, but making the sexy with? Not so much.) I will have to introduce the homicide theme into my subconscious. My nightmares fall into two distinct categories: pedestrian Going-to-the-mall or Screwing-up-in-a-minor-way-at-work dreams or cinematically terrifying sci-fi/apocalypse with aliens/monsters dreams.

ah, youth, with your dreams of sex and murder. I dream of riding the effing BUS, or of the dog (not mine) running away. zzzzzzz

I have never been a sleep lesbian, to my knowledge, but I rarely dream about sex at all (which I've been lead to believe is unusual). I have the teeth falling out dream incessantly, as well as a dream that I am very late to work (at a job I haven't held in years) and won't call to tell them I'm late and spend the rest of the dream debating whether to go in at all or if it's too late. I tend to be the murder-ee instead of the murderer as well. I've been shot or stabbed countless times in my dreams.

Ha ha ha I just had to C&P your blog ads for this post:

My reoccurring dreams always involve my ex-husband and sex and zombies.

Wait a minute....Hugh Jackman is GAY??

And here I thought I was the only one suffering from 'Unfocused resentment and obscure sense of martyrdom'. Glad to know you're out there somewhere...

'Unfocused resentment and obscure sense of martyrdom' is strong in this one, too.

"I'll do that during the week I have off work between Christmas and New Year's!" I blithely told myself.

So far, myself has managed to brush the dog.

My bad! Hugh Jackman is not, I repeat, NOT gay. I was thinking of someone else Not American and hot. So please go back to fantasizing about how you will run into him at the sandwich case at Pret and just hearing you say Excuse me, can you reach that Coronation Chicken? will make him leave his wife of 14 years for me. I mean you.

If you are very skilful with the computer, you can position your pointer so there is a hand coming out of the rubbish bin in that bus stop picture, which gives an extra bit of party zest to the whole scene. It is almost exciting. At least it is if you live in Canberra, as I do.