I am developing a morbid obsession with these fondant Jesuses. 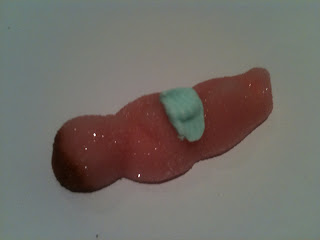 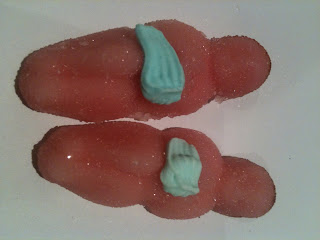 The children came home with them on Sunday. They had been to what their father described with a slight shudder as he handed them over, as "une fête très eurotrash" and the Jesuscakes were only one part of an elaborate party bag. I have appropriated them for ethnological research purposes. The children did not care, they also received large chocolate Père Fouettards, which are leering at me from my sideboard, as I type, lolling uncouthly in their bags of arbitrarily sized marzipan fruits. 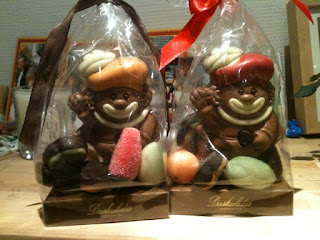 "We're over heeeerre!"
St Nicolas chocolate offerings puzzle me. We spent ten minutes staring at the Neuhaus window display of St Nicolas today, trying to work out what the strange striped shape to his right was (conscious that last year's Pierre Marcolini offering featured the salted dismembered children in their barrel. That's the magic of Christmas RIGHT THERE). It turned out it was his legs and St Nicolas was doing a handstand. Which seems improbable, not to say downright alarming.

Anyway. This was not my first encounter with fondant Jesii. You cannot go to a supermarket in the kingdom of Belgiana at this time of year without encountering them. The traditional presentation is as so, atop a foetus shaped brioche called a Cougnou: 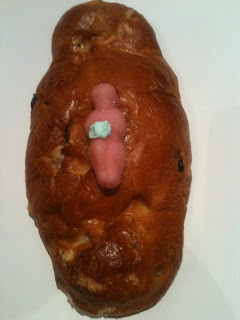 How do you feel about that? I'm .. well. Ambivalent at best. On the one hand, dough. Sugary dough. When is that ever a bad thing? On the other, what we have here is a shocking pink sugar representation of the Christ child on a sort of amorphous, humanoid coffin of bread (Heresy #2). I'm no expert in theology, but tell me, how can that possibly be right?
The interwebs tell me that the strange green swirl is supposed to be swaddling clothes. 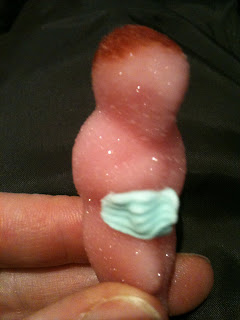 The children eyed it sceptically and said they thought it was a harmonica. (Heresy #3)
"Do you mean a harp?"
"Ouais, ça".
They also thought the Jesii looked like a pair of shoes. (Heresy #4)
"But they've got hair!" (I don't like the hair. They don't always have hair)
"Quand même".
More worrying still, the interwebs tell me that traditionally children would expect to find a Cougnou UNDER THEIR PILLOW on the morning of 6th December. And I wonder why my children have nightmares?
"Wake up children! St Nicolas has been and he's left you a creepy voodoo sugar baby on a bread roll!" (Heresy #5). Also, hello? Crumbs?
Sugarjesus didn't seem too impressed by this display of canine impertinence (Heresy #6), even though I managed to save him after only an experimental lick from the weepette (Heresies #7 - infinity). 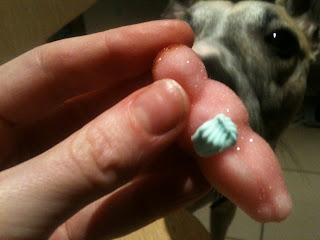 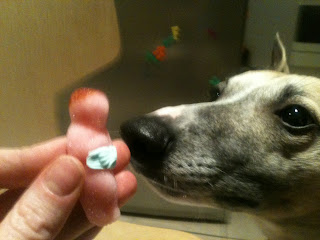 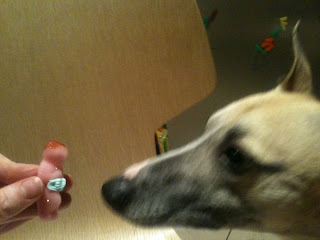 I think there might be smiting. Weepette does right to look wary. 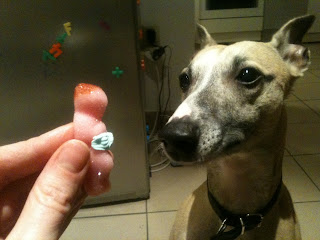 I'm wondering if there might be mileage in some sort of short film featuring my two sugar Jesii. I definitely want to do SOMETHING with them. Maybe I could take them on a photographic road trip around Brussels? They'd look lovely sitting on a 92 tram.
I should probably get out more, shouldn't I?
Posted by Waffle at 22:25

Labels: 'tis the season to be scared witless, The book of Belgium

my password here is gatinom. as in gateau-omnomnom, perhaps. fitting.

Oh god, yes! The sort of chewy marshmallow virgins! I had forgotten about them! Right. That's a whole production right there. It's a nativity.

LOL, have only recently been enlightened with Belgian traditions and ... folklore

swaddling icing - maybe it was one of those mistranslation things that started centuries ago and we are only now realising the truth! megster x

I've got some of the Virgin marshmallows - I won't tell you what the baby Jesus reminds me of. And the Père Fouttard ... Christ, Emma, get out of that horrid place - come home!! You know it makes sense.

The pic of the face-à-face between Weepette and one of the Jesuses is mesmerizing.
The weird hair does spoil the sugarbabe indeed, though it's kind of funny. The swaddle cloth thingie, is that not simply a strategically placed sugar figleaf?
And cougnou is just the funniest-sounding word to me. Looks disgusting for a brioche, though.

Yowza. Those are creepy. They look a little like a Venus of Willendorf. Clearly evidence of how pagan cultic elements live on in our Christian era.

There was already a movie made about the fondant Jesii: Eraserhead. Thanks for the nightmares!

You know, in the many months I've been reading your blog, I've gone from believing Belgium to be a sort of benign France, to being utterly fascinated by it. I mean I've been there several times and never encountered any fondant Jesi. And now I'm vexed about that because that is SURELY something I'd buy and preserve for an eternity of amusement (or until I got hunger pangs so strong I gave in and bit off his hairy noggin). Also, this is a small thing but in your photo of the party bags, are those uh...things...Santas in black face? Did no one learn from the whole golly fiasco?

Belgium just gets stranger and stranger. My first encounter involved getting lost with a french family when I was 15 because all the signs coming in were in french, but on the way out they were in flemish. It took us a long time to realise that Mons and Bergen were the same place. It has been down hill all the way from there. I clearly need to arrange my next visit for november/december when the strangeness hits new peaks.

BTW I love the verb to smite - thank you for the mention. Just remembering our guide in Egypt drawing our attention to the wall paintings of Rameses smiting his enemies still makes me laugh. So biblical yet so sweet.

Vegetable Assassin - Oh yes. You aren't familiar with the quaint European tradition of "Black Pete"? You need to listen to this, urgently (relevant section from about 4.20:

Oops, actually, you have to go to Part 2 for the actual 6-8 black men:

Oh, you made my day.
Jesii is now my favourite neologism.

i like the idea of a harmonica, or better yet, a small accordion.

also, i misread your last suggestion as "pornographic trip" and hell, why not?

The Belgians make baby jesus lie on a big POO! That is so very wrong, the Belgians. I am disappointed in Belgium as a whole, really, for that. It is good we have you there, pointing out the wrongness, like a secret common sense spy.