We went to the Christmas Market this weekend - unforgivably early, I know, but there's never a bad time to drink vin chaud at eleven in the morning and take the now traditional picture of my children riding a stag beetle: 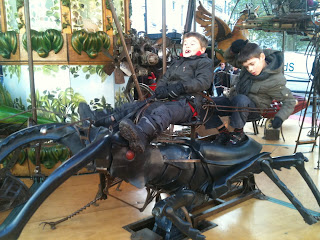 (yes, the smaller one currently has virtually no teeth, making him look sadly like the resident idiot of a particularly dentally challenged eleventh century village when he opens his mouth)

I love the Christmas market. It wavers between tacky, disturbing and magical and I am a sucker for twinkly lights and inappropriate food. However, even I must allow that this year's signage is particularly worrying: 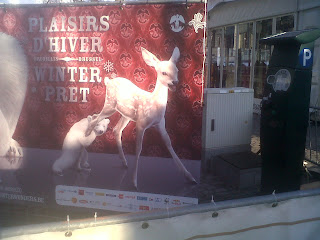 B alerted me to it last week. "I'm not sure how I feel about the Bambi-terrorising baby polar bear" he wrote, which I thought was very measured of him. Even so, I thought I should check that we weren't just imposing some inappropriate interpretation on a perfectly innocent image, so I asked the children.
"What do you think the baby polar bear is doing, boys?" Best Joyce Grenfell voice. They glanced up momentarily from staring, rapt, at the stupid stupid stupid game where you pay €10 - holy crap, seeing that written down has just brought it home to me quite how outrageous it is - to fish baubles out of a tiny pool of water in order to win a toy you could have purchased at a fraction of the price, had you ever wanted to do such a thing (which no-one in their right minds would).
"Ben, il va manger le bambi".
"Oh. Are you sure?"
"Ben, ouais, c'est un prédateur". Withering look.
"Oh. Right".
These, dotted along the route between the two parts of the market, puzzled me too but were fun enough for climbing on: 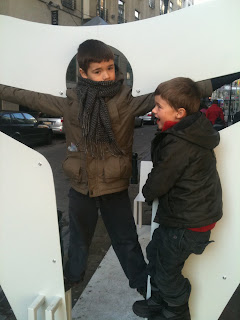 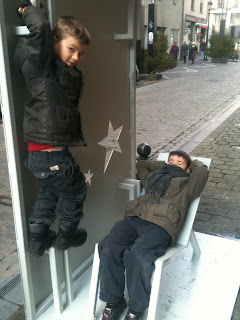 On top of that the "guest of honour" at the market is .. Morocco. That exceptionally, er, Christmassy destination. Ah well. Coherent theme: O, pointless entertainment 1, I think, and it's none the worse for that.
We had a good time. Admittedly, there was some unseemly weeping about whether we would go in the "Ice Monster" (a large inflatable khaki wind sock decorated with halfhearted spikes and manned by a family of unutterably sinister eastern Europeans far scarier than the Monster itself), and Lashes had his usual breakdown halfway up the Big Wheel and spent the ride with his head buried in my knee.
Sample dialogue:
"Aaargh, Lashes! Why do you come if you know you're going to hate it?!"
"I DON'T KNOOOOOOOW"
"Look! The Atomium!"
"JE NE PEUX PAS REGARDEEEEER".
"So basically I just spent €5 to torture you? Hmm?"
"Uuuuuuugh".
Apart from these minor incidents, it was great, even the ice skating, which has, in previous years, also been the scene of tragic family breakdowns. The CFO is Ultra Competent (of course), I am, perhaps surprisingly, capable of staying upright, but Lashes used to hate it with the heat of a thousand suns, and cling to the rail nearest the exit weeping until he was released. Fingers simply refused even to try, causing serious paternal angst. This year there was zooming, lots of falling over, and hilarity. Here is Fingers, with a hot chocolate the size of a family saloon car, on the verge of deciding to join in. He subsequently declared the whole enterprise "trop bien" (high praise indeed) and asked if we could come back the next day. 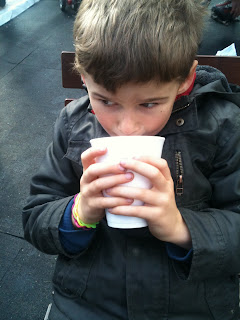 It was a good wintry weekend altogether, though without the snow they were desperate for. Lashes has been appearing, wraithlike, late at night to alert me to the slightest flurry, for days. I think he never actually sleeps, just stands staring out of his bedroom window, willing the weather on. It's becoming an obsession, which I find rather charming. I went upstairs at one point to find them both in the dark, doing what they told me was a "snow dance" around Fingers's disco ball. I hope they'll get some this week, particularly since their papa is less of a wimp about sledging than me.
In the absence of snow, there was at least ice. We took the weepette, trussed up in his ridiculous winter coat, to the park, where the lake was frozen over and perfect for poking with sticks and standing on experimentally as your mother shrieks at you from half a mile away. 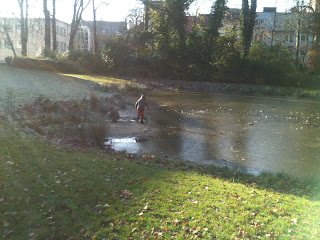 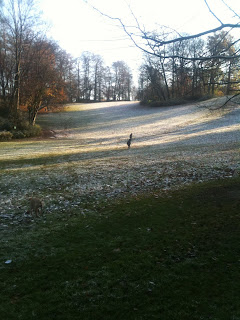 Then we came home, put the fire on, and I spent all afternoon cattle prodding the children away from it, crossly. All in all rather lovely.
On top of that, I had that peculiar thing last night where I suddenly ended up in the Grand Place. Like Londoners and Big Ben or Trafalgar Square, Brussels residents don't tend to go to the Grand Place much, but just occasionally I find myself wandering across - in search of a displaced taxi rank in this case - and thinking "oh yes, I live in Brussels. That's nice". It was about 11 at night but still busy and the gigantic Christmas tree was looking rather fine. 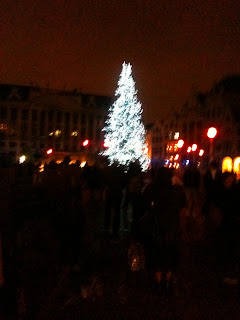 I reckon that's a B plus for you this weekend, Brussels. But don't go getting complacent. This minus 14° nonsense I am hearing about this week is pure exhibitionism. I won't be standing for it. Not unless I get a free penguin.
Posted by Waffle at 18:27

What a delightful crop of little pleasures: "trop bien" indeed.

The other day, I saw a disturbing picture of my colleague drunkenly weeing on the Christmas tree in the Grand Place last year. He's asked if I want to go to the annual lunchtime market drinks with him this year - I'm a bit scared.

Want snow? You can have some of ours. We've got about half a metre more of the stuff than anybody could reasonably want or use.

Mrs F.C. was manning a stall at our local christmas market this weekend and had to be up really unreasonably early because she voted to walk to the venue rather than have to dig the car out of the cosy snowdrift within which it has been hibernating since last Thursday.

Lashes is not alone in his snowlonging. His contemporary (to the day!) Frankie has been in the grip of similarly feverish anticipation for days now. He's also started railing against the BBC Weatherforecasters, who he holds personally responsible for allowing his grandma in Newcastle 12 inches of snow against only the slightest flurry for Manchester, which is apparently 'not fair'.

Bit perturbed by the polar bear/reindeer thing, something peculiarly Belgian going on there, methinks.

I also ventued through the Grand Place for the first time in aaaages over the weekend (with visitors) and had the exact same feeling as you. I got a bit lumpy in my throat actually, especially watching the tourists enjoying themselves watching the light show, which is pretty good this year. Of course, my Brussels love-in quickly evaporated yesterday morning when I stood on one of those loose pavings on the footpath and manky Brussels-water went all over my work suit trousers.

Oh, and a friend of mine (also an avid reader) are planning a special pictorial Colruyt surprise for you in thanks for many a Waffle induced chuckle. Hopefully we can send it to you before Christmas if we get our act together.

P.S. Fingers leather jacket is A-Maz-ing. Where would one find one and are they made in adult male size?

Did you not notice that this year's Grand Place Christmas tree is actually two, i.e siamese twins joined by the stump?

There is a freak of nature siamese twin tree in the grand place? THIS is the reason I will go.