It all depends on the goat weighting

Whilst I am already a sort of cultural ambassador for Belgium to a small section of the anglophone internet, my ambitions are actually broader than that. It is definitely my turn to be Prime Minister of Belgium. I don't suppose the money is great, but it's almost certainly better than sitting at my kitchen table twitching.
Pros of running Belgium:
1. Free goats
2. Nothing to live up to (43 consecutive terms of Yves Leterme, the goat loving, anthem forgetting idiot savant).
3. Probably get to meet Fabiola.
4. When it all goes to shit, you can always blame the Treaty of London and say your country was misconceived from the outset.
5. The Atomium is beautiful.
6. Did I mention the free goats?
7. You do not need to know basic facts about your country, such as what the National Holiday commemorates, or what the national anthem is (non French speakers: in this notorious clip in which Yves Leterme sings La Marseillaise instead of La Brabançonne, a number of prominent Belgian politicians are also asked what the national holiday commemorates and get it impressively wrong. I particularly like my old friend Guy Verhofstadt's answer when asked why they celebrate on 21 July: "Because it's the national holiday". EXCELLENT ANSWER). Convenient.
Cons of running Belgium:
1. Country on brink of schism.
2. Country largely bankrupt.
3. Country butt of French jokes, considered 'boring' by rest of Europe/World.
4. Strong likelihood of being replaced by Yves Leterme within weeks.
5. The Manneken Pis.
6. Large swathes of country look like this: 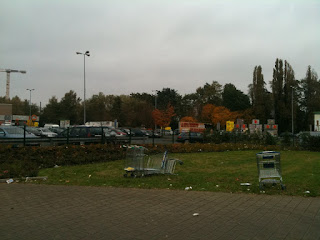 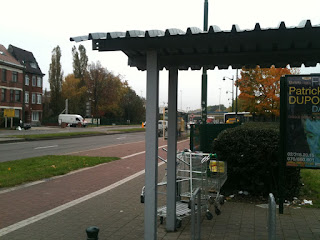 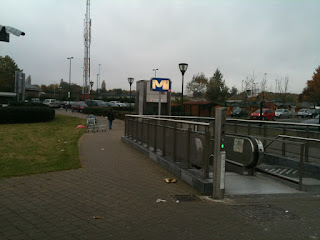 (These memorable images were captured on my trip to Ikea with Beatrice yesterday. In the course of two hours we were accosted by every sturdy beggar and maniac in the west of Brussels and I was subjected to TWO 'contrôles aléatoires' by the Swedish deathstar. Other than that it was highly successful and I have a replacement for the inflatable spider gut I melted - no, you don't want me to explain - and cinammon rolls, which make everything ok).
I think this means I should definitely stand for public office. Possibly.
In other news, a highly secretive dog owning assassin of my acquaintance has emerged from deep cover to request €550, plaintively. This suggests his intelligence gathering skills leave something to be desired, since if I had €550 I would have spent it on fripperies like the rent and luxe hot chocolate and so on.
I told M.
E: So I asked the old ladies in the park, and apparently I'm the THIRD single mother he's tapped for money this month.
M: Ahahahahaha. Oh my fucking god. You are a nutter magnet. They should do scientific studies on you. What's the fifty for??
E: Yeah, I wondered that. Perhaps he thought it would be like those beggars that demand a really specific amount of money, like, 14 pence, with a really specific story about a train ticket or something. Makes it more plausible.
M: Please can you lend me €549 to cover my gambling debts and €1 for a Bounty?
E: Yes! Hmm. That's actually quite convincing, I'll get my chequebook.
M: Make it €1.50 for the Bounty.
Posted by Waffle at 11:09

Greets from Cyprus where the goatlife runs free. Go into any bar at the weekend and you'll see exactly what I mean.

Also no problem with beggars and panhandlers as the locals just drive straight over them. As they do everything else.

I'm so moving to Belgium. I wanna sit outside a bus station with a can of lager and a string wife-beater and menace passers-bye for money in a Glaswegian accent.

Everbody's gotta have a dream right/

You forgot to add the 'Music and Light' show at Le Grand Place. Such a spetacle should be seen the world over....

Anon - Graham, is that you?

i'd do it for the free goats and the opportunity to meet fabiola. i'd kill to get close to that hair.

by the way, i can explain the marseillaise mix up. from my vast and varied exploration of national anthems, i have come to the conclusion that all of them, save la marseillaise, are musically and narratively dull. the man just didn't want to sing the boring old dirge that belgium's national anthem surely is (because they all are). case closed!

I'd vote for you.

Failing this I nominate you for English language ambassador.

Fabiola looks like a goat! If you become PM loving goats, you might end up cuddling Fabiola.

I love your writing, I really do! After a dismal day, your last three posts made me smile.

Running Belgium might involve having to deal with other politicos, no? Definitely a con.

The Atomium beautiful? Well, I wouldn't exactly have used that adjective...striking maybe, but I guess beauty is in the eye of the beholder. Bruges, now that is something I could call beautiful. And you're right, the Mannekin Pis is definitely a disappointment. Oh, and I think you should add the excellent Belgian beer to the pro list...maybe even exchange the goats for it. How much beer do you think one goat could get you?

You should be the Prime minister of Belgium. If you are can I be one of your political people?

Also, surely you'd get free chocolate too? I'd be the prime minister just for that.

Lastly, if he asks you for money again, give him 10p. the small amount and random coinage might confuse him.

It's quite interesting being a nutter magnet; worth it to see the disbelief and schadenfreude on one's friends faces when you regale them with tales.

A very special friend with the strongest ability in this arena (strangely enough, lawyer in London) would reduce me to tears (laughing) when I went out with her...they gravited towards her like she was the pied piper...

Anyway yay! Rule Belgium. Collect goats. Do not pass go. That is all.

Cinnamon rolls? I thought you hated cinnamon, or is that just in combination with apple?

I'd still vote for you either way.